A couple weekends ago I continued my annual tradition of traveling up to Mid-Ohio and shooting the ALMS race. A day filled with sweet exhaust notes and fast cars to act as moving targets for a shutterbug – things couldn’t get better… …but they did! I was lucky enough to catch up with photojournalist Bob Chapman, who briefly took me under his wing to leap head-first into the world of motorsport photography! You may recognize him from photo credits and articles in Road & Track, Autoweek, Panorama and Excellence magazines.

As far as photography tips go, Bob certainly had his work cut out for him. Look at my coverage from the 2009 race if you don’t believe me! I have always liked cameras, but was never camera-savvy. As we set up in turn two, I was given a crash course in motorsport photography in the lulls after cars roared past.

“You want your film speed to be very low – 100 ISO if you can,” Bob said. “You don’t want to freeze the cars with high film speeds, or they’ll look like they’re parked on the track. The wheels and the background should blur to get that sense of speed.”

As Bob dispensed his advice, a nearby photographer must have sensed my novice status and offered some of his own suggestions.

“You shouldn’t be using a monopod in this corner,” he was saying. “The cars come in really close and a monopod limits your ability to keep the cars lined up in the shot as they work around the corner.”

He then took me aside and gave me some very specific technical suggestions that made an impact on how I shot the rest of the race. He was very nice, too. Photographers take care of each other!

When I returned to Bob and my gear, Bob was shooting one of the Green Hornet GT Challenge cars when he noticed I’d returned. With a wry smile, he said,

“Andrew – use your monopod in this corner! Don’t give up the stability it provides.”

Photographers disagree with each other, too!

This is an art, and like artists of any medium, photographers harbor a variety of opinions for optimal technique.

Bob’s energy and tenacity were complemented with a formulaic approach to shooting the race. He rarely stayed in the same position for long, moving to different corners every few laps to get a fresh angle on the cars as they fought for the lead position in each class. I may have learned as much from watching him work as I did from listening to him describe what works best. 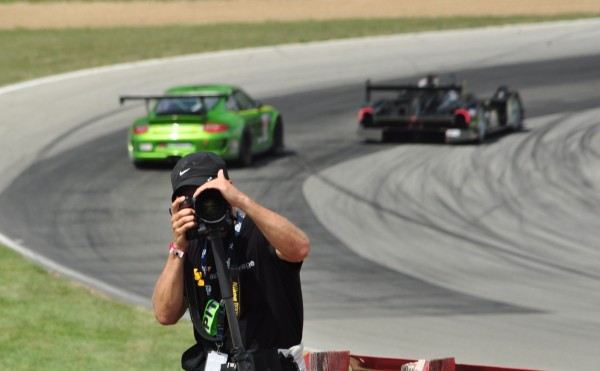 Pictured, Bob Chapman, watching out for me during the race. Maybe? Probably not.

Honestly, the first corner we shot was where I received the majority of my advice during the race. The rest of the time could be classified as “on-the-job training,” and I couldn’t have been happier with my progress. A painter can talk to you for weeks about how to paint a perfect picture, but you won’t improve your abilities until you pick up a brush and tackle a canvas – which is what I did, in a manner of speaking!

Toward the end of the race, I found myself experimenting with settings more and more to dial in the look and feel I wanted in the shot. I wasn’t guessing as much when adjusting settings. Sunlight was fickle for the entire race but that didn’t stop me from taking some great pictures.

If you follow FLATSIXES.com on Facebook, you may have already seen the handful of photos I posted. There are a number of others I will release on Facebook over the next few days, so keep an eye out for more exciting pictures. Last, but not least, a big FLATSIXES.com thank you to Bob Chapman, for his time and advice during the race!

Other Porsche Blog Posts You Should Read
What is the 944Fest and Why Should You Attend?
Go Behind the Scenes of a Porsche Photo Shoot with FLATSIXES.com
Exquisite Porsche Wallpaper for the FLATSIXES Faithful