Art can mean so many things to so many people (remember this Porsche based artwork?). It’s probably one of the most subjective topics there is and one of the hardest to define. While we here at 993C4S are not always able to define what art is, we definitely know it when we see it (borrowing liberally from Justice Potter Stewart)! Recently, while searching for a designer to help create a logo for our upcoming name change, we stumbled across Canadian artist, Paul Chenard. Paul specializes in the unique mix of original automotive artwork and corporate branding (you may have noticed his new ad over on the right side-bar.)

While getting to know Paul, we learned about his various hobbies and interests. Among other thins, Paul is an avid collector of vintage racing toys and automobilia. As an artist and designer Paul looks for ways to combine his creative and design skills with his passion for collecting. One such outlet presented itself in the form of hi-end scale model building.

As the name suggests, scale models are a representation or copy of an object that is larger or smaller in size than the actual item. These models come in a myriad of shapes and sizes and the level of detail can vary greatly from manufacturer to manufacturer. Scale models come in various forms such as pre-built injection molded models, die-cast metal or complex kits (like the one below) that take an incredible amount of time, infinite patience and a steadier hand than ours to complete.

Paul always wanted the challenge of developing a highly detailed and exacting replica of a storied race car. However, the acquisition cost of these larger, more detailed kits can be quite high (prices can range from a few hundred into the thousands of dollars) and at the time presented a challenge for Paul and his family. Good fortune and fate came together in the form of a raffle ticket, purchased by his son Laurent at a local model show. When the winning number was drawn Paul and Laurent found themselves the new owners of Tamiya’s #12020 Porsche 934 Turbo RSR 1/12 plastic kit (a highly desirable and out of production racing kit.) Here’s a sample of similar Tamiya model kits currently available for sale on ebay.

Over the next several months Paul poured his heart and soul along with 350 + hours of his time into the planning, construction and detailing of the kit. 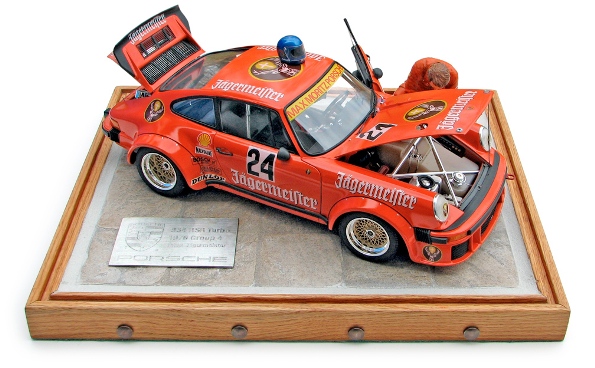 In Paul’s own words:

I did extensive research into the engine, hoses and wiring, and interior details to get it right; that includes the scale of those hoses and wiring. I even added weight throughout the whole car so that it would sit right, and actually have some realistic heft when you pick it up.

The kit is so detailed that the only extra parts that I had to scratch make myself were the headlight bulbs/sockets, an electronic item on the top-right of the alternator, the shift linkage and the front tow hook.

A tradition I started with my early race car kits was to honor my dad’s memory by adding a ruby from one of his old watches that he gave me to take apart when I was a kid. I like to hide them in plain sight. On the 934, it’s on the bottom far left of the dash; you can just see it in the picture.

The car was the main kit, but I knew that Tamiya had made a 1/12 scale race team in 5 separate kits: the driver, the manager, 2 mechanics and a tool set. Through connections, I managed to get the 4 figures, all of which have some tools, and the driver’s helmet. I decided to build the tire mechanic, add some of the tools (modified for the 934) and the driver’s helmet. This mechanic is my first stab at figure painting.

Since the Tamiya orange spray paint is enamel, and glossy, I decided to custom-mix the acrylic for the mechanic’s suit. The graphics (stitching) are decals I printed. They were tricky because you can’t print white. For example, I applied the Jagermeister decal on his back, painted in the white, and then finished it with another Jagermeister decal on top. The Dunlop patch is a carefully trimmed laser print which I varnished, then glued into place.

I made the base from scrap oak hardwood flooring and a piece of scrap plywood. I had a friend cut a piece of leftover tile, which had the look I wanted. I had a custom acrylic cover built to my specs, and finished it off with a pewter plaque. 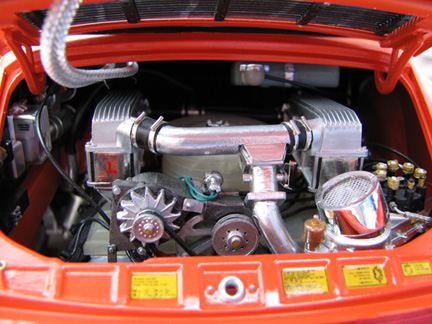 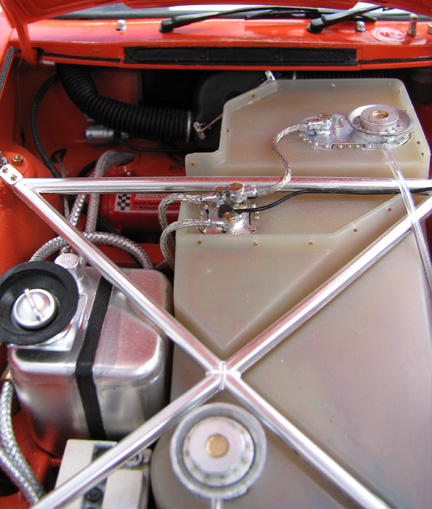 As you can tell from his description and the pictures above, Paul’s effort, time and hard-work created a one-of-a-kind Porsche Model. His attention to detail (there are actual screws in the battery post clamps and lead sheets in the battery) paid off in other ways, as the project won the highest honors in two major local shows:

We will have more of Paul’s work in the coming weeks as we review some of his Porsche based drawings and implement the logo/illustration he designed for our new site PorschPurist.com (that’s a thumbnail of it to the left). For right now, if you would like to see Paul’s artwork or further explore his vintage toy collection you can do so by choosing any of the following links.

Coincidently, we just received our own Porsche model courtesy of the good folks at Tamiya. The Porsche 911 GT3 Cup VIP 07

is an electric RC kit (we’re big, big RC fans.) We will be working on this particular kit over the next couple of weeks, spending some time with it on the track and reviewing for your enjoyment, so stay tuned.