With a lengthy career in touring and GT3 cars, Theirry Blaise has that sort of confidence and composure that allows him to thread the needle at high speeds. Combine one of France’s fastest tracks and the fastest road-going car produced by Porsche, and that calm at triple-digit speeds becomes quite useful. We’ve seen how the car behaves in a pro’s hands at slow speeds, so here we see how the car is truly better suited to the faster tracks.

Though the majority of his career was spent in touring cars with half the power of the GT2 RS, endurance racing in a Porsche 991 GT3 Cup surely prepped the Frenchman for the characteristics of its road-going, turbocharged brethren. 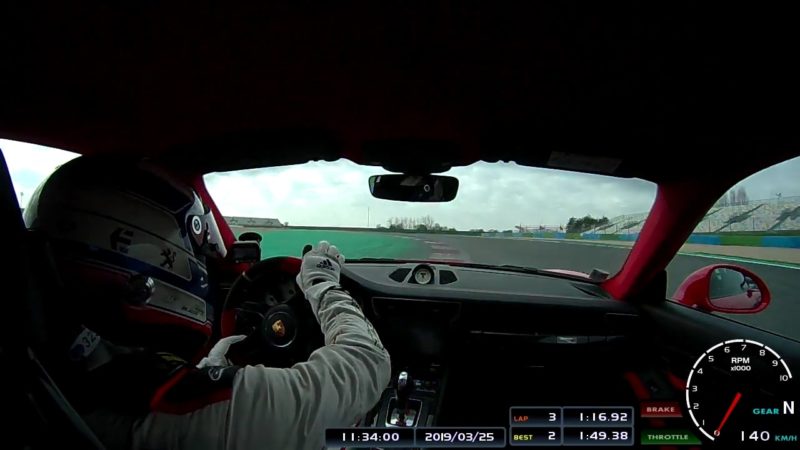 Perhaps that’s why Blaise appears so confident and calm while clearly pushing through Magny-Cours long and intimidating bends. With plenty of long, tightening corners, his throttle application is all-important, and a careful deployment of the turbocharged thrust is clear to the keen eye. Under power, it’s surprisingly composed car at high speeds; only mild dabs of opposite lock are noticeable.

Where the car does appear a little friskier than some might like is during high-speed braking maneuvers. Note the way Blaise juggles the weight of the sashaying car when hitting the brakes at 0:34. With the grass and the walls so near, and the speed so high, it takes a man as brave as he is coordinated to do that repeatedly. However, it must be predictable and confidence-inspiring to get so near to the white lines with the rear dancing around. That predictability is also evident in the many tightening corners, we get to see how the car tends to understeer gently, even when feeding in the steering with some smoothness. Observing his line through the Turn 12-13 complex, as seen at 1:17, it looks like he’s confident enough in the car to abruptly change direction and ride the curbs. It rewards his bravery, and shows us that, if a driver is comfortable with the rear slithering around under braking, it truly becomes an extension of their body.