Porsche’s been somewhat cagey about releasing any footage of its newest performance flagship since it set that incredible Nurburgring lap two months ago. We’ve learned about the 991 GT2 RS’ comfort and sophistication compared to other generations of the GT2, and we’ve seen just how quickly it sprints to 200. We also know how it was able to outrun the second-fastest track scalpel from the Volkswagen Group, the Lamborghini Huracán Performante, by some five seconds at the Nordschleife. Now, thanks to Sport Auto and Christian Gebhardt, we get plenty of insight into how these two differ on a very different track.

The Porsche may have eclipsed the Lamborghini by an impressive five seconds on the 12.9-mile Nordschleife, but the time it ekes out over a 2.8-mile lap of this abbreviated Hockenheim is staggering, especially considering the capability of Lamborghini’s most track-focused offering ever.

It’s obvious from the outset that the Lamborghini’s engine note takes the prize, but it’s not about the aural appeal here. The Performante is undeniably stable through the daunting Turn 1 and into the stadium section, and it remains composed regardless of how hard Gebhardt clouts the curbs. Unfortunately, the Performante seems limited by its front axle; Gebhardt is incapable of putting the power down without running wide at the corner exit. That understeer hampers its progress through the technical infield the most. However, it might be the better car for the well-heeled novice; its reassuring balance looks to coddle the driver in a way that the edgier Porsche doesn’t.

For the skilled driver, the Porsche’s even stronger in the high-speed sections, and it’s willing to turn in and rotate—even oversteer slightly—at speed. This incisiveness means the Porsche carries far more speed through the middle of even the fastest corners where the difference between the two is smallest.

Where the Porsche truly shines is in the slower corners, most notably into Turn 2 (2:09). While the Lamborghini suffers from understeer and a delayed throttle application (0:47), the Porsche traces a tighter line, exits without overwhelming the front axle, and even yaws subtly under the throttle. Chalk that difference up to a few facts: the Porsche is 180 pounds lighter, benefits from rear wheel-steering, and slides gracefully under the brakes—note how much steering effort is required under heavy braking. That direction change, coupled with wonderful traction, exploitable power, and additional 110 lb-ft of torque means it’s a little quicker out of every corner, and that advantage accumulates to a 1.7-second difference over one lap—an incredible margin on such a short course! 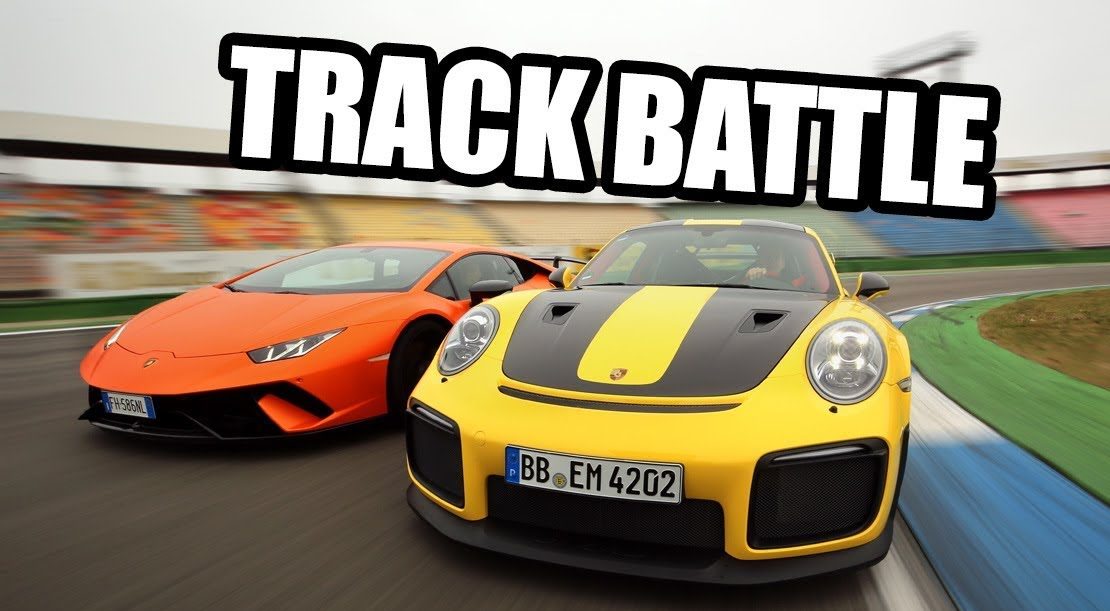