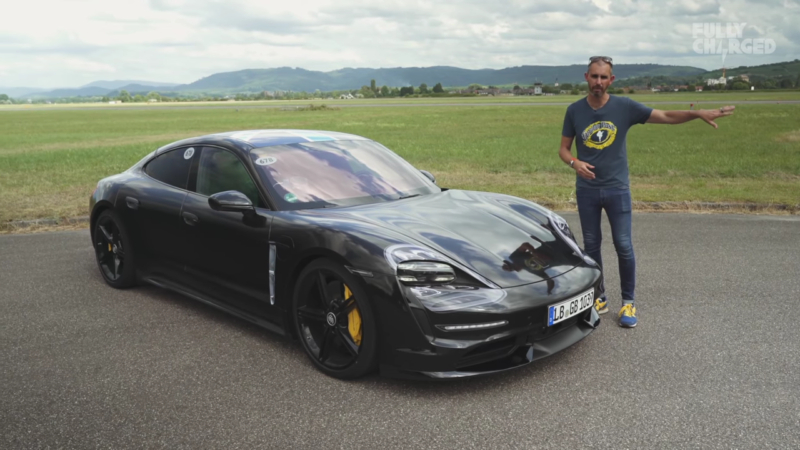 Short overhangs and wide hips help give this new super sedan a profile that looks genuinely like that of a sports car.

More than just outright speed, every focused Porsche provides outrageous robustness, and as a result, peace of mind. Driving 500 km to the Nurburgring, spending the afternoon setting scorching laps, and driving home without so much as a hiccup is purely Porsche. Fortunately, that tank-like robustness has filtered down from the 918 to the new Taycan. With the guidance of the cool and meticulous Jonny Smith, we get a glimpse into what makes this new entrant to the high-performance EV market such a standout.

The Taycan’s 800 volts, sent through a two-speed gearbox, allows it to run 0-62 in just over three seconds. While the new Taycan can’t boast quite the same 0-60 figures as the Tesla P100D, it has one distinct advantage in this department. Liquid cooling is a large part of what helps it stand out in the company of the comparatively fragile Teslas, which simply cannot match the Taycan in terms of repeatable sprints.

There’s more than regular launches promised with this new model. Stationed somewhere between the Panamera and the Cayenne, the Taycan offers all the expected straightline speed and luxury, but its active aero and sportier variants point towards a new breed of car that should convince the skeptics of its athletic potential. “I actually felt the jowls try and leave my face then. I didn’t even know I was that jowly!” says Smith.

After thirty hard launches and no battery-related issues, the Taycan can no longer be considered part the camp of ultra-fast, environmentally friendly luxury sedans with a party trick. Instead, this resilient sedan now belongs to a new category altogether. This new style of machine for Porsche, one which has a lot in common with a hardened sports car, can impress the speed freaks and the environmentalists in equal measure. Plus, with the way it fires the occupants’ heads into their headrests, it might please a few chiropractors, too.