In a little more than a month the following 10 Porsches will cross the block as RM Auctions lifts the gavel on the distinguished Don Davis Collection. As Davis prepares to ‘downsize’ the collection, more than 50 automobiles, each impressive in its own right, will be offered ‘without reserve’ on April 27, 2013 in Fort Worth, Texas. Included within the collection are the following 10 Porsches. 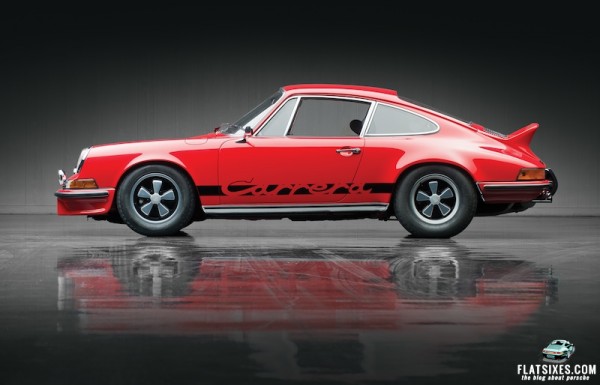 Originally delivered in Germany, this 911Carrera RS is one of a reported 30 with the special-order Code 2525 India Red paint. As built, it had a limited slip differential, sport seats, retractable seats, through-the-grille fog lights, and a retractable antenna.

While its early history is not recorded, it is known to have spent time in a Japanese museum. It was imported to the United States by the Symbolic Motor Car Company, of San Diego and purchased by George Valerio in excellent condition, with matching numbers but in the incorrect paint. It subsequently found its way to Phillip Coombs, of Santa Barbara, who immediately commissioned a thorough restoration.

The rotisserie restoration was performed by Kundensport Porsche, of Camarillo, California, with single-marque specialists working on everything from 356s to 917s. The drive-train was rebuilt by Aase Brothers in Anaheim, California. The car has been driven some 700 miles since completion and performs exquisitely. The sport seats are original, restored to perfection by Tony Garcia at Autobahn Interiors in San Diego, as part of his complete renovation of the interior.

Given that the last RS we saw sell at auction wasn’t anywhere near as correct as this car we think that the sky is the limit for pricing on this one, especially if there a bidding war ensues. An original German-delivery car, Don Davis’ 959 ‘Komfort’ was acquired through Canepa Design, where it was extensively serviced in early-2012, with all fluids changed, wheels refinished, chassis aligned, and all systems properly checked, in addition to a full detailing. “Stock,” as a Porsche aficionado would want it, it still wears its original Graphite Metallic over a complementary Dark Grey Metallic leather interior. With just over 17,000 kilometers traveled, it shows very little wear and is clean and well-presented throughout—not only on the visible surfaces, but also under the hood and underneath the car. Even the carpets remain in excellent condition under their plastic covers.

Opening the front lid reveals all of the original factory accessories that one would hope to find, including a complete tool kit, jack, and small air compressor. The car was accessorized when new with heated sport seats with electronic height adjustment, an alarm system, and Bridgestone tires, and it comes complete with a list of services performed by Canepa as well as its Porsche Certificate of Authenticity.

If this 959 is as clean as it seems to be, we think the strong service history and color combination could push the bidding for this 959 quite high. We think this particular Porsche could be the deal of the auction. The 997 Turbo Cabriolet, while an amazing example of our favorite marque, doesn’t come close in terms of collectability or brand heritage to the other Porsche choices. As a result, it’s possible bidding for this car could be light and as it’s sold without a reserve someone might just get a steal. We’ll have to wait and see.

Will Any Records Be Set?

It’s hard to tell at this point, but the ’73 911 RS Touring and the ’88 959 Komfort is where the action will be. I’m sure you remember the ’73 RS that sold at Gooding earlier this month on Amelia for $550k. While it was an “ok” example, it wasn’t even close to this one. As for the 959, a prototype version sold at auction for $440,000 a few months ago and that car is said to have come with a piece of paper that said it was basically “unsafe to be driven”. Given the clean history and color combination of the 959 in this auction we wouldn’t be surprised to see prices well north of $600k…

Check Out the Rest of the Collection

Amazingly, these 10 Porsches make up only 20% of an incredible collection that includes both foreign and domestic beauties. We would highly encourage you to check out all of the lots available on the RM site as any Porsche fan will surely enjoy the rest of the collection as well.

Update: The full digital catalog is now available too at http://www.rmauctions.com/digitalcatalogs/2013/DD13/

We’ll be following the auction closely and let you know what prices are realized and if any records are broken.

Other Porsche Blog Posts You Will Enjoy
How Much Will This Porsche 959 Prototype Sell For?
Why Didn’t This Porsche 908/3 Sell at Amelia Island
Is The Bad Boys Porsche Really For Sale?
1960 Porsche Tractor Super Type 329 for sale