I’ve been around air-cooled cars all my life. Both my parents had VW Beetles, so when it came time to replace my hand-me down first car, a ’71 Ford Capri, it isn’t surprising I went for a ’72 Super Beetle. Then years later, after I found out that Heidi had an heirloom 1958 Porsche 356A Cabriolet in the family, I made it my mission to get that car in our garage. Since then, we acquired an ’06 Boxster, ’86 Carrera Cabriolet, ’95 Carrera, ’85 Ferrari 308 and an ’04 996 Turbo X50. We still have all but the Boxster. 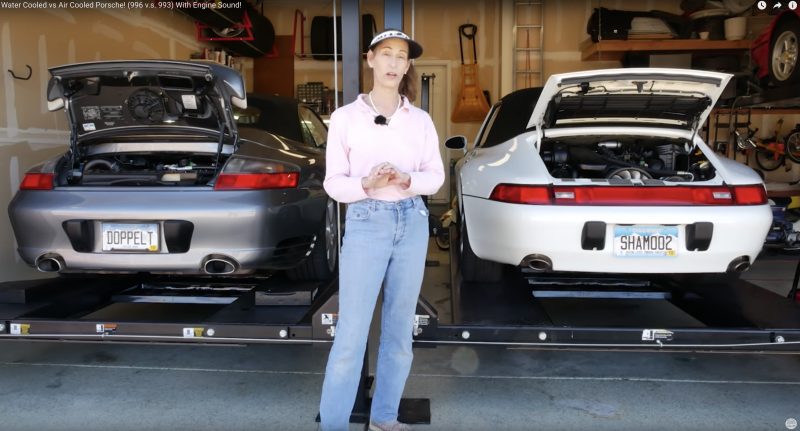 From all our adventures over the years with the cars and the inevitable maintenance, it seemed like it would be fun to talk a little about the differences between air-cooled and water-cooled Porsches. With the 993 and the 996 side by side, it set the stage for, as close a comparison as we could come up with for the wonderful features of each. We dive into the traditional simplicity of “air and oil do it all” versus the efficiency, scalability, and convenience of a modern pressurized liquid system.

What To Expect in this Porsche Engine Comparison Video

In this video, we explore the pros and cons of each system and even talk a little bit about some of what went into Porsche’s decision to abandon so many years of air cooled tradition in the 911 line. With the introduction of the 996 model in 1999, Porsche was facing stricter noise and emission regulations in both the European and US markets. In addition, the venerable flat six had climbed to 3.6L and close to 300HP in the NA cars and finally 450hp in the Turbo S. It was at this point that the cars were just finally outgrowing this older, louder, less scalable and less precise cooling technology and had to figure out a way to move to the industry standard of pressurized water/ Ethylene glycol. This necessitated a complete engine re-design which occurred in parallel with a complete chassis and drivetrain redesign.

At the end of the video, we compare the sound differences, to give you an idea of just how different they really are. The 993 shows off that great whoosh-ey goodness while I don’t think anyone would complain about the 996’s proper cabin heating and cooling, and engine temperature management that doesn’t require keeping an eye on that oil temp gauge in hot weather. Which is your favorite?