No, it’s not an April Fool’s joke, it’s for real. Just a few minutes ago Porsche annouced they would revive the Porsche Boxster Spyder. The new model retains the the same unmistakable character of the previous Spyder but, thankfully, has what appears to be a much easier to operate “partially” manual top. Stowing the top on the Porsche Boxster Spyder

Unlike the previous generation that required the patience of a saint, mixed with an engineering degree from MIT, this generation’s top looks like it should simply fold out of the way with the pop of a latch and some gentle pressure. 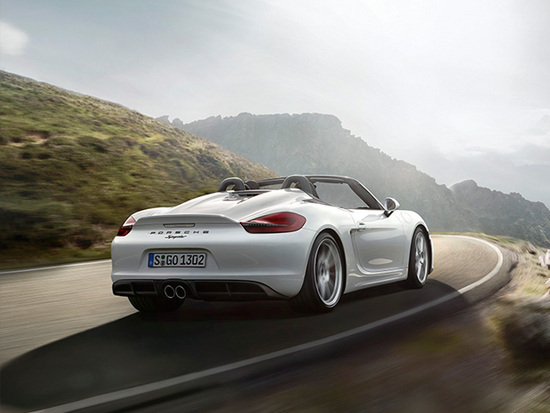 This time around, the new Boxster Spyder is available only with a manual transmission. As you row your own gears, power will come from a 3.8-liter horizontally opposed six-cylinder engine making 375 hp. This allows for zero to 60 in 4.3 seconds and a top speed of 180 mph. Stopping power is borrowed from the Carrera S and the ride height is 20-mm lower than the standard boxster. While no weight was given just yet, it is said to be the lightest of all the current Boxster models. The interior of the new Spyder is designed to create an atmosphere “that elicits a feeling of pure driving pleasure”. The driver and passenger sit in standard Sport Seats Plus, while the new steering wheel, with a diameter of 360 mm (compared to 370 mm in other Boxster models) and more direct steering, help ensure a better road feel. 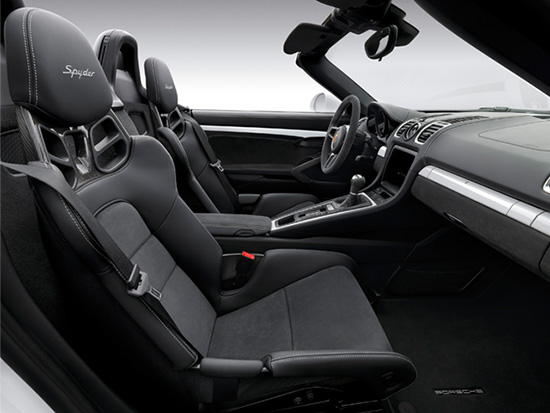 As with the previous generation, radios and AC can be ordered at an extra cost as they don’t come standard. We’ll publish more details as we get them, but for now, know that the new Porsche Boxster Spyder will be launched in the U.S. market in October and can now be ordered at dealerships. In the United States, the MSRP is $82,100, not including a $995 destination charge. In Canada, the new Boxster Spyder will be launched at the end of the third quarter of 2015 with pricing starting from $93,700.