Last week FlatSixes.com was invited to Birmingham, Alabama to the Porsche Sport Driving School to experience Porsche’s PDK transmission at its best (both on the road and on the track). The two day event consisted of a 200 mile Time, Speed, Distance type rally and then a day of on-course driving instruction in a variety of PDK equipped Porsches.

The varying driving courses (street and track) were a great way to showcase the two sided capability of Porsche’s double clutch: a fuel-efficient and effortless automatic cruiser capable of delivering close to 30 mpg, coupled with a racing thoroughbred that forgives even the worst drivers with faster lap-times than similarly equipped manual Porsches. As the FlatSixes.com team has had the good fortune to drive a number of PDK equipped Porsches in the past, we chose the Porsche Boxster S for this event as it’s one Porsche we haven’t spent enough time in. 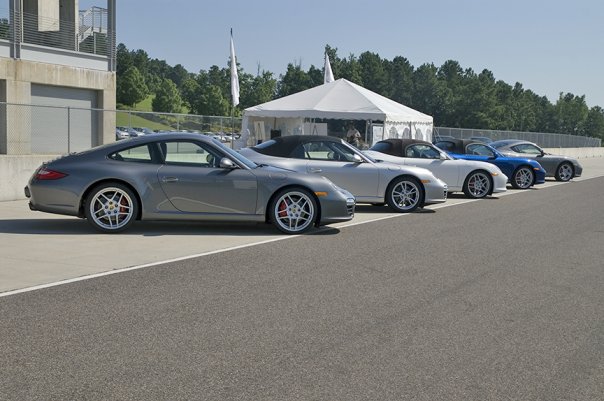 A nice selection of Porsches to choose from

I can’t begin to tell you how many times I’ve heard people say that the Boxster is a “girls” car or not a “real” Porsche. I’m not sure where this psuedo “bitch” status comes from, but I can say with confidence it’s unfounded and without merit. Say what you want, but after watching Hurley Haywood pilot a 2009 Boxster S around the track at Barber Motorsport Park for a lap time just a few tenths of a second shy of his time in a 2009 Porsche Carrera I became an even bigger believer. A believer in mid-engined goodness and the merits of balance over power. Any doubts left lingering, after seeing Hurley’s times, were quickly wiped away after spending the better part of a day at the Porsche Sport Driving School in a Boxster S (and other P cars) receiving instruction from none other than David Donohue himself (for those of you who aren’t motorsport fans: 1. Get with the program; and 2. Driving lessons from David are the equivalent of golf lessons from Tiger Woods).

The Boxster is a Porsche in every sense of the word.

Available in two flavors: The entry level base model and the sportier “S” version. The 2009 Boxster develops 255 horsepower at 7200 RPM from the 2.9 liter engine equipped with Porsche’s VarioCam Plus. With 10 horses more than last year’s version, the base Boxster achieves a top speed of 163 MPH.

Opt for the Boxster “S” and horse power jumps to an impressive 310. The addition of 15 more ponies, from last year’s S version, propels the car from zero to sixty in less than 5 seconds and a top speed of 170 MPH.

There’s nothing entry level about those figure and definitely nothing girly!!

Over the next few weeks, I’ll be giving you my impressions of PDK on and off the track, the Porsche Sport Driving School, and even more on the Boxster. If there’s anything specific you want to know, feel free to leave a question in the comments below and I’ll do my best to answer.

Related Posts
A Week With a 2009 Porsche Carrera S with PDK
A Boxster Affair
Porsche Doppelkupplung (double clutch) or PDK Explained
Porsche Factoid: The PDK Transmission is over 20 Years Old