Turns out the Cayenne likes to surprise people. It looks like an SUV, but it sure doesn’t drive like your average SUV. It looks like a big car, but it corners like a sports car. It may seem heavy, but it doesn’t behave as if it is, and because of those beautiful brakes, it sure doesn’t stop that way. And just when you start believing it’s a fancy vehicle meant to transport your kids and dog in style along serene suburban roads (it is), it goes and proves you wrong yet again by getting dirty and liking it. 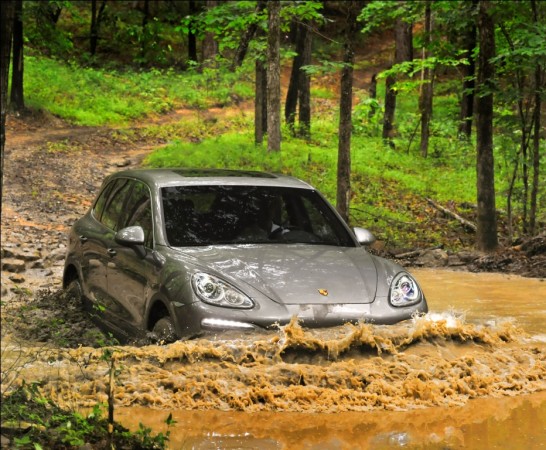 There is nothing wrong (in fact, it’s very right) with selecting luxuries such as the Burmester Audio Package so you can cruise Collins Avenue in Miami Beach jamming in style, particularly since you can also use said feature while climbing what feels like a vertical wall or traversing water that nearly reaches to your passenger’s window. We know this because we drive the Cayenne in quite inhospitable terrain including rocks, dirt, mud, and sand. And you know what? The Cayenne likes it. In fact, the Cayenne is quite like my dream woman: elegant, detail-oriented, and—most importantly—equally at ease at a dinner party or camping trip. 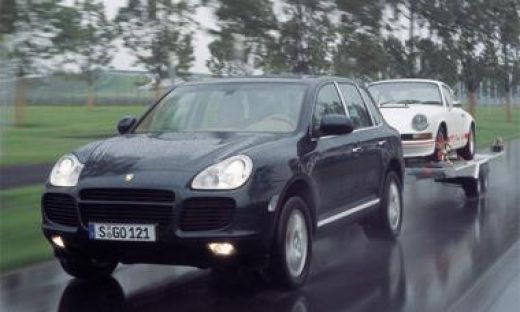 I have to admit I have a hard time picturing the Cayenne in off-road situations. The fact is, I generally see Cayennes used in everyday driving—hardly an off-road challenge. The most utilitarian challenge I see a Cayenne undertake involves acting as a tow vehicle for a 911 on the way to the track; a role it plays beautifully and reliably.

Never mind that Porsche Cayennes secured top-three finishes in the beyond-demanding Transsyberia Rallye, dominating the field in 2007-8. If you had asked me prior to this year whether you should go off-road with your Cayenne, I would have probably said, “hmmm, why?” I am far from a clean-car fanatic who refuses to drive my Porsche on dirt roads or when it rains, but if I had spent a bundle on a Cayenne, I probably would have reservations about subjecting the vehicle to dirt, rocks, etc. let alone using it in a manner where something like what happened below is a possibility (fair warning, the video below has some moderate adult language. I think you’ll find it more than reasonable given the circumstances).

Porsche’s own Laurance Yap co-drove a Cayenne in the 2007 Transyberria Rallye (and, due to erroneous coordinates, experienced a massive crash in the desert. As seen in the video above) “Needless to say, walking away from the huge accident (the engine was about 100 feet from where the car landed) left me with a deep appreciation of the integrity of the car,” said Yap. But beyond the impeccable safety, he says, he was impressed by the Cayenne’s practicality and comfort. “It was about as comfortable a rally car as you could ever hope for, with adjustable air suspension, decent ride quality and even a/c!”

So, how did I end up driving a Cayenne in the most inhospitable of situations?

The guys from Porsche made me do it! Who can say no to being presented with a new 2011 Cayenne and encouragement to the tune of, “take it; go see what it can do!” And, most importantly, what can render the heart lighter than, “it’s insured, don’t worry!” Nothing, that’s what. It was time to get some mud on that Classic Silver Metallic Paint and brake dust on those pretty yellow calipers.

The Perfect Opportunity to get Dirty

At Barber Motorsports Park in Birmingham, home of the Porsche Sports Driving School, the Porsche folks have worked with owner George Barber to design a challenging course to showcase the Cayenne’s off-road prowess. The course, a path carved in the Alabama wilderness, takes the driver through varying terrains, dramatic ascents and descents, narrow passes, trees, mud, water and rocks. 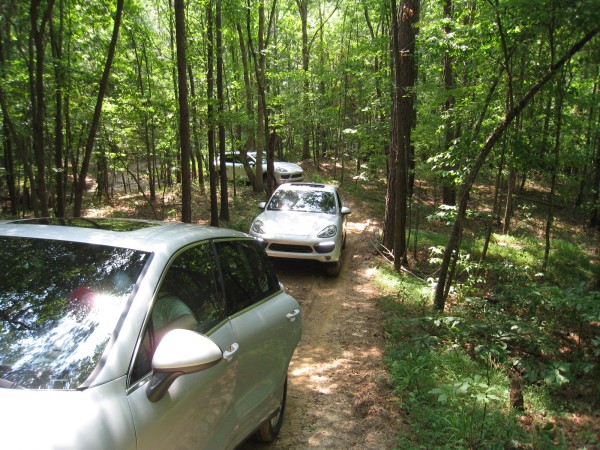 Maybe Porsche Sport Driving School instructor Danny Eastman’s request (delivered with a big smile and Portuguese accent) that we keep a distance of four car lengths on the route “just in case the soil and rocks were loose” should have tipped me off that the course is far more challenging that one would expect.

Soon we’re off on the course, traversing incredible climbs that are possible thanks to a short front over-hang, a low center of gravity and well developed all-wheel drive. 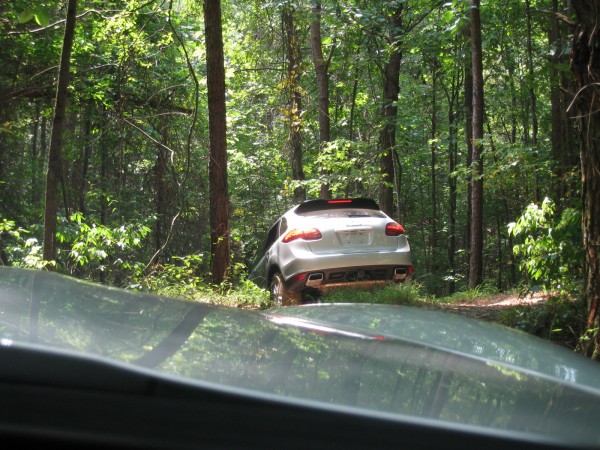 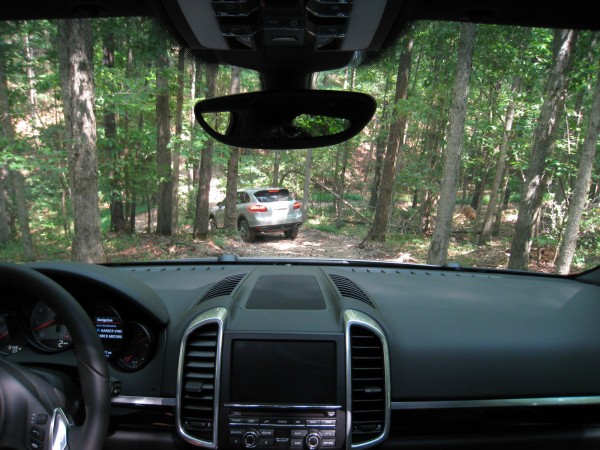 If Daniel hadn’t driven ahead of me in another Cayenne, demonstrating the challenges could easily be completed, I would have never ventured through the route. The most impressive challenge was a descent I’m not sure I would have been able to complete on foot, but the Cayenne easily made it down.

So what’s Going on Under the Hood?

Your Cayenne may be comfortably driving you around town to-and-from the office, or aptly handling the transportation of perennials between Home Depot and home, but it’s quietly hoping you’ll take it out to play in the outdoors. The same car that is engineered to be a sophisticated and elegant vehicle is made to take on various outdoor challenges. Just how does it do it?

The new generation Cayenne has a much more sophisticated all-wheel drive and stability management system than its predecessor. This improvement translates to 3 distinct off-road modes: 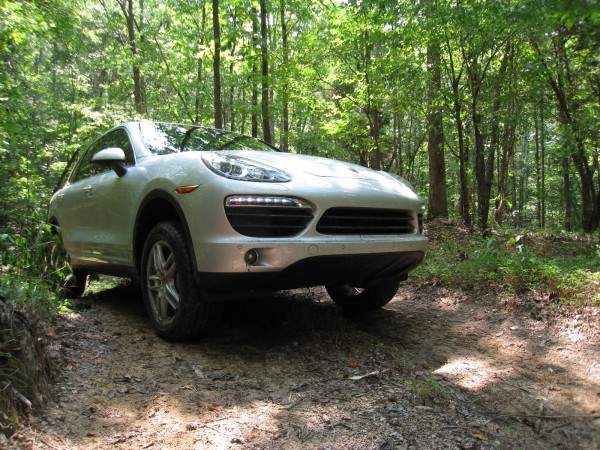 Gen 2 Cayenne ride height can be adjusted by the flick of a switch, see how vehicle sits up high for trail clearance

Off Road 1 changes the Cayenne’s ride height, the shock setting and the drivetrain. This setting works best for light off-road duty on varying terrain that perhaps requires a little more vehicle clearance

One more click to Off Road 2 and the transmission goes into a low-gear type of setting to allow for more vehicle control. At the Barber course, Off Road 2 worked best when we needed to climb over gentle hills and deep rutted two track trails.

The most extreme of the three settings, Off Road 3, adds locking the rear differential to the changes in settings 1 and 2. When it is time to challenge the big climbs and the scary descents this setting proved to be a good choice, affording the driver the most control.

Talk about a Porsche that can do it all. After completing the course at Barber, I spend a few moments chatting with Danny about the Cayenne. We laugh about the fact that we could just run it through the car wash, take some of the mud, sand and rocks off, and climb back inside to head to dinner and the opera. The next time you feel the call of the wild, or plan a camping trip or off-road adventure, but wonder if your Porsche Cayenne can handle it, rest assured the answer is a resounding, yes. Yes, she can!