We’re big fans of the Cayenne Transsyberia here at 993C4S.com but even we are a bit surprised at this new addition from Stuttgart. The strictly off-road version of Porsche’s best-selling SUV makes perfect sense as a platform to test new components that will eventually make their way on board production level vehicles. Does it however, make sense as a special edition, limited production version available to the general consumer? Only time will tell.

With fewer than 600 of these muscle bound Cayennes making their way to the shores of North America, they could very well be snapped up by well heeled soccer moms with a penchant for off-roading. Combining the 405 hp, direct injected motor from the GTS with the Transsyberian air suspension and front/rear stainless steel skid plates, there isn’t much that will stop this SUV.

Personally, we would like to see this Porsche Designed AMPV go into production and made available to the public. We would purchase one in a second (with the optional 50mm cannon mount.)

For the full press release and pictures of the 2010 Porsche Cayenne Trannsyberia, see below. 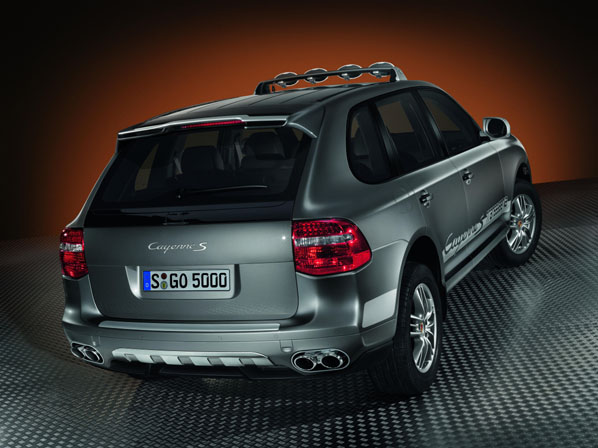 ATLANTA — September 8, 2008 — Winning Porsches come in many shapes, and nowhere is the competitive Porsche Motorsport DNA more evident than in the latest version of the thriving Cayenne range – the new race-inspired 2010 Porsche Cayenne S Transsyberia.

The Cayenne S Transsyberia is based on the Cayennes that won one of the most grueling endurance races in the world. The rally marathon, which is held every spring, is a two-week race that traverses Russia, Siberia and Mongolia and covers over 4,400 miles. It is called, simply, the Transsyberia Rally, and slightly modified Porsche Cayenne S models have won this brutally demanding event three times in a row.

The most capable Cayenne yet will be revealed at the up-coming Paris Auto Show, October 4 – 18 2008.

Just as the Weissach-developed Cayenne S Transsyberia competition models were based on the street version of the Cayenne S, this 2010 special edition, with less than 600 units earmarked for North America, will feature the 405 horsepower, 4.8 liter naturally aspirated, direct fuel injected V8 engine lifted directly from the Cayenne GTS. The Tiptronic S six-speed automatic transmission with a 4.11:1 final drive ratio is standard.

All Cayenne S Transsyberias will be equipped with air suspension and Porsche Active Suspension Management (PASM), which electronically adjusts the shock absorbers to achieve superior ride and handling characteristics. The permanent all-wheel drive Porsche Traction Management (PTM) system divides the torque between the front and rear, with a 62% rear-bias for greater on-road driving dynamics.

The Cayenne S Transsyberia proudly shows off its winning pedigree. It will be available exclusively in four different color combinations – black with orange accents or crystal silver metallic, also with orange accents. For those desiring a more “stealthy” color combination, the Cayenne S Transsyberia will also available in either black with meteor grey metallic highlights or meteor grey metallic with crystal silver metallic highlights.

The standard front and rear stainless steel skid plates emphasize the off-road character of the Cayenne S Transsyberia. An optional off-road package that features a variable and lockable rear differential, rock rails with integrated skid plates, a reinforced engine-bay guard, and enhanced protection for the fuel tank and rear axle is available. A second towing lug is provided “just in case.”