Earlier in the year, at the request of a few different readers, I posted pictures and descriptions of Porsches they were looking to sell. The response from that post was fairly strong and the people who had their cars listed received a number of different responses. Even more surprising is that the original post still gets significant page views even though each of the cars has since been sold. Today’s post is the latest Reader’s Ride for sale. Not surprising, it’s a 933 and an exceptional one at that.

As a reminder, for those of you looking to sell your Porsche, each one of this site’s sponsors: TruSpeed Motorcars, Willhoit Enterprises and Sloan Cars all buy cars as well (Sloan will also help sell on consignment). I know what you’re going to say, they’ll only offer you wholesale pricing. In some instances, that may be true, but in others, depending on the car, they may be able to do much better. The market for certain cars is very limited and they get most of their inventory from people just like you. Each one of them is as much a buyer of cars as they are a seller.

If you are a member of Rennlist, then you’re sure to know JoAnne and her Speed Yellow C4S. If you’re not a member of Rennlist or you don’t know JoAnne, you should. JoAnne and a bunch of other women from RL make up the women of Rennlist who generously donate their bodies (okay, pictures of their bodies) to produce a calendar where all the proceeds (from calendar sales) go to Project Rennwish. Here’s a taste if you don’t remember (and it just happens to feature the car for sale. 🙂 ) According to JoAnne, the car has 49,100 miles is a six speed with black powder coated 996 Turbo Twist Wheels. The car comes complete with Motor Sound Package, Optional GHL SS Exhaust, LPMM, black partial leather interior, Speedline SS pedals and door levers, Schnell strut brace, rear wiper and after market performance shocks (JoAnne thinks they are MO3s?? but can’t completely remember. She does know they are set-up for the street vs. track use). Lastly, she spent almost $6k having the car sorted at Callas Rennsport and has the records to show for it.

This is a Very Strong Running and Great Driving car. Tony Callas himself said this is one of the tightest running 993’s he’s worked on…. This is not a Concours car, but a great looking clean driver. You may want to respray the nose. It has the usual rock chips that 993’s are famous for attracting. It also has a small scratch that the previous owner touched up, but it’s still lightly visible. The car is currently located in Prescott, Arizona

ASKING PRICE: $43,900 If interested, in this car, you can contact JoAnne through RL, by commenting on this post or by emailing her at rojospeedster at verizon dot net. 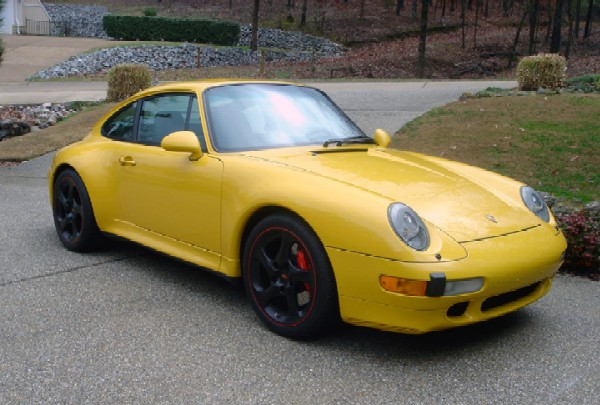 Are you interested in selling your car? Want to reach more than 15,000 people a month interested in Porsche cars and products? It’s simple, use the contact page to get in touch with me and I’ll be happy to put your car in a listing like this one. If I start getting a lot of interest from people, I’ll add a classifieds section where you can list your car for sale. If, you simply want to show off your car for other Porsche owners to see and comment on, let me know. I’ll be showcasing the first of many Featured Reader’s Rides in the next few weeks.