While the US remains Porsche’s single largest market with 35,043 cars delivered in 2012, China is a close second with 31,205 Porsches delivered (and will soon overtake the US) . China’s love affair with Porsche started with the Cayenne and slowly spread out over the rest of the range. The Chinese market for expensive cars is still very young, Porsche only arrived officially in China in 2001. The most popular Porsche models in China tend to be the most expensive: the Cayenne Turbo, Panamera Turbo and 911 Turbo. In general, the Boxster is seen as too cheap [not enough status associated with it] and therefore not very popular. In China, the more expensive the Porsche is, the better. As such, the upcoming Macan is probably not a good idea for the Chinese market. Instead, something larger and more expensive than the Cayenne would most likely sell in great numbers. Right now, Chinese Porsche buyers don’t seem too interested in the GT3 and other track variants. They don’t really get the race-thing and especially don’t see why they should pay so much more for a car without a radio and without a proper Porsche badge on the bonnet. Image is everything here! When a wealthy Chinese car buyer buys a Porsche he wants to show he bought an expensive Porsche. Friends, and especially family, need to be convinced that the buyer is successful. How Chinese Porsche Buyers Differentiate Themselves

With Porsche’s popularity quickly growing in China, and the 911 Turbo being the most expensive stock model currently available, the brand loses some of its magic for those that want to stand out. Right now, the only way to solve this conundrum is by ‘personalizing’ your newly purchased Porsche. Sometimes going to extremes if necessary. Factory options like larger wheels simply aren’t enough. “Bling”, tuning and aftermarket customizing is the way to go. Aftermarket customizers and tuners recognized an opportunity and quickly jumped into the Chinese market offering all kinds of wraps and body kits. Along with the aftermarket products came the counterfeiters. Everything is available, real or fake, good and bad. For instance, Porsche buyers in China can choose between a real Hamann body kit or a copied one for a fraction of the price. The copies are so good these days no one but an expert can tell the difference. [A big problem that needs a solution.] 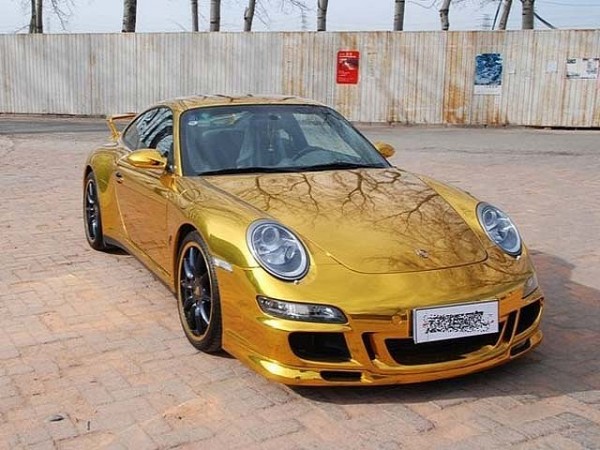 The pictures in this post are just a few of the customized Porsches I have personally seen in China, but there are many, many more. The most popular color for a wrap seems to be gold, followed closely by silver, then matte black and pink. Surprisingly, pink isn’t for women only, Chinese car buyers are predominantly male and they don’t mind hitting the clubs in a pink Porsche. A pimped Porsche draws a crowd quickly in China. People are drawn to them, surrounding the Porsche to look and take pictures. This effect is magnified greatly outside the big cities where someone driving up in a Porsche has the same effect as if aliens just landed in a UFO. An Ugly 911 in Guangzhou Starts to Draw A Crowd

I’m of the opinion that Porsche could earn significantly more in China by offering greater possibilities for customization via option or aftermarket/Tequipment. It seems, at least for now, that’s not Porsche’s intent. Too bad, because Porsche-designed stuff tends to be good. However, Porsche’s “bling” will most likely never match that of China. Today’s post was contributed by Tycho de Feyter. Tycho is the founder of CarNewsChina.com, a Beijing-based blog about automotive happenings in China.

Other Porsche Blog Posts You Will Enjoy
Is This The Worst Spoiler You’ve Ever Seen on a Porsche?
Copper and Crystal Plated Porsche Boxster
Flat Black Porsches
Gold Wrapped Porsche Cayenne
Porsche Covered in Tweed