Last week I presented the first part of Porsche 356: My First Porsche by Wilhelm (Billy) Roedenbeck. Today’s post is part II of that story. As a reminder, Billy was born in Lima, Peru. He bought his first Porsche in 1973 and never looked back. He resides in Miami, Fl. with his wife and her Boxster.

It turned out the cars had been purchased by another lawyer. The gentleman had purchased both the 1952 Cadillac and the Porsche. I contacted the new owner immediately. The Porsche was a 1963 356 S-90 Cabriolet, he told me.

The Cadillac Limo was being used by his widowed mother (with a driver of course). As for the Porsche, he had given it to his wife, who was not too happy about it because she thought it was too small and, to make matters worse, manual. He gave me his home phone number and said, “you can talk to her and see if she wants to sell it.”

Needless to say, I called her the minute I arrived home, and she seemed amenable to the idea of selling. She told me to come over anytime and look at the car. When I arrived at her house about 15 minutes later, I was speechless: the Porsche was in perfect shape, the odometer showing only 32,000 km. The car was flawless, down to its huge fabric soft top, a tiny rear window, gorgeous red leather upholstery, optional wooden steering wheel and an FM Blaupunkt radio. The only “problem” was a slipping clutch (probably brought about by the good lady, wistfully wishing the car had been one of those lovely automatics).

The Porsche came with a lot of spare parts, mostly the ones that could be easily damaged or stolen, like trim and plastic lenses. It also came with 12
original German oil filters and 2 cases of Penzoil (imported) oil. A complete set of workshop manuals was included, as well as a new leather bound tool set. The only thing it lacked was the custom cover needed to cover the top when it was down.

I purchased the car on the spot for 120,000 Peruvian Soles, which back then was equivalent to about $3,000. My daughter and son got rides in it well before they could speak and eventually grew to love Porsches, too.

Sadly, I did not own this Porsche for very long. In 1974, work took us to Costa Rica and I had to sell the 356. Importing a car like this to Costa Rica would have cost me about $10,000 in import duties alone. Before we left, I sold it to a famous race car pilot (he raced an Allard Chrysler for many years) for $6,000. The picture below was taken just a few weeks after I sold the car. 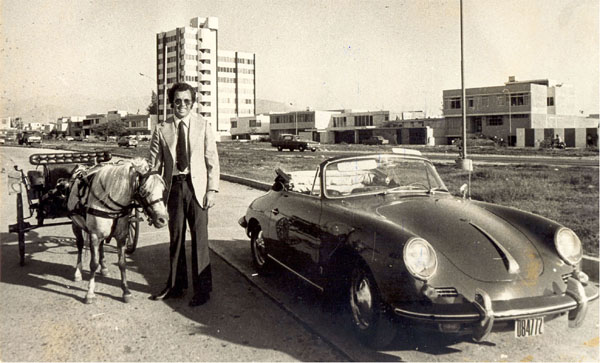 Nearly four decades later, I’ve once again lost track of my first Porsche. I hear in the early nineties it made the journey from Peru to California, where it was lovingly restored and sold. Like me, the Porsche emigrated to the U.S. and ended up staying. Even if I were to find it again, I know I could no longer afford it. But that grey 356 will always mark the beginning of my family’s enduring love of all things Porsche.

I want to thank Billy very much for his contribution with this story and give a special thank you to his daughter Valerie who has been a fantastic supporter of 993C4S.com since she found it (or it found her.) As it turns out, since this story was written, Billy and Valerie were able to track down the car to its present owner in Peru. As I understand it, Billy will be making a trip to Peru in the coming weeks and this story may have a different ending. More to follow…