Yammie Noob is a YouTube vlogger who creates and promotes content about riding motorcyles. He’s popular enough that he’s amassed over 138,000 subscribers in a very short period of time. Unfortunately, he also appears to be a bit reckless having suffered two, in my opinion, very avoidable crashes over what looks to be just a short 6-months. While I’m not a fan, nor do I subscribe, his name popped up on my radar when a reader forwarded the picture you see below.

This is the type of Porsche Tattoo none of us ever want to get.

From what we’ve been able to piece together, Yammie Noob was involved in an accident with a Porsche back on April 8th. Allegedly, he was returning from a couple of days at a track event with a group of other motorcycles, and was riding on the wrong side of the road, when he hit an on coming Porsche head-on.

One of the other riders in Yammie’s group had a helmet camera rolling, and in the gif above we actually see the moment after the Porsche and Yammie collide. The screen shot above appears to show Yammie flying through the air, literally head over heals. 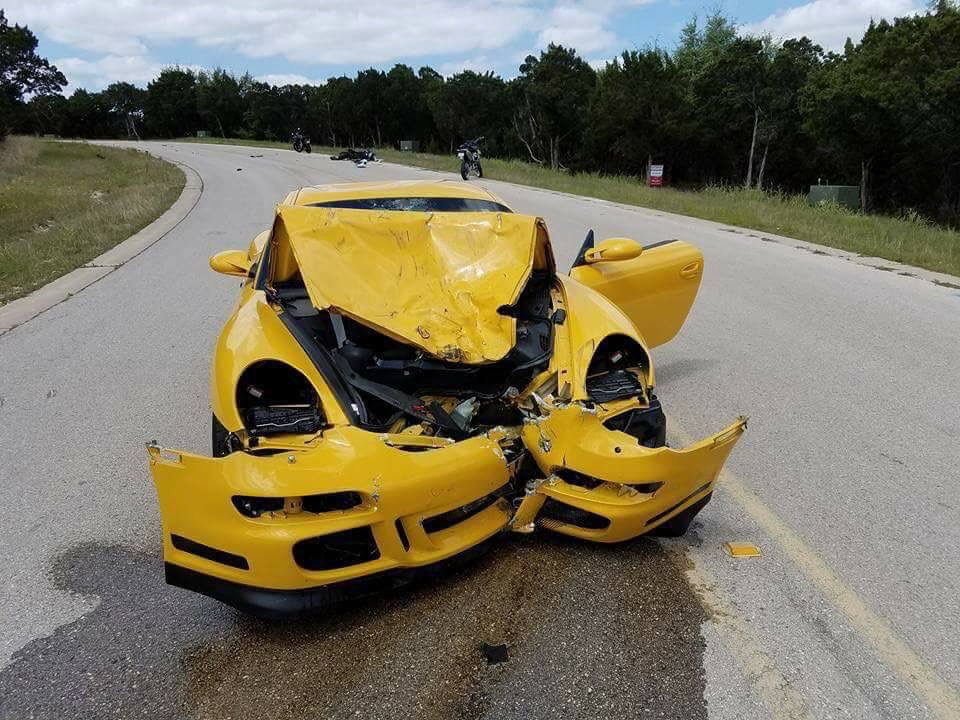 And this is what’s left of the Porsche. We haven’t been able to locate the driver of the Porsche to get a report on his condition. We can only hope that he’s doing okay and and makes a full recovery.

We do know from Yammie’s Instagram account that he did survive the crash and is currently in physical therapy. He goes on to say that he’s currently unable to walk and lists his injuries as follows:

I’d say he’s damn lucky to be alive. Let’s be safe out there folks. Most of us know to keep our speed to the track but it’s hard to account for idiots like this Yammie character. The facebook image and caption below make it sound like Yammie was the only one to go to the hospital. Hopefully, that means the Porsche driver walked away just a bit bruised and with his new tattoo. If anyone knows the condition of the Porsche driver involved in the accident please let us know in the comments below.