About the author: Marvin Water’s has been involved with the Porsche marque since 1994. He prefers track events but also enjoys showing Porsche’s as well. Follow him on Instagram @swiftmotoring

I received the best Valentine’s gift a man can receive on February 14 when I retrieved my mail. It was an envelope from “The Amelia Island Concours d’Elegance” accepting our 1986 944 Turbo at Cars and Coffee at the Concours! I make my plans to attend the Amelia every year and this year was set to be very special. Amelia Island means different things to different people. If you are reading this, I know you understand Amelia is the place to be each year for the second week in March. “The Amelia”, as the long 4-day weekend is becoming known, has grown into what many agree is second only to Pebble Beach in terms of stature and scope of offering. The main event is Bill Warner’s Amelia Island Concours d’Elegance traditionally held on Sunday at the Amelia Island Ritz Carlton utilizing the 10th and 18th fairways. Warner’s team also hosts the Cars & Coffee at the Concours on the same fairways the day before. This year, in an unprecedented move, Warner and his team moved the Concours to Saturday due to guaranteed inclement weather on Sunday. It would have been easy to cancel Cars & Coffee but Amelia has always been for and about the people. The Cars & Coffee event was simply moved to the 1st and 2nd fairways of the Ritz Carlton golf course and both shows came off without a hitch! By the way, Sunday was cold, rainy, windy and generally a day best spent indoors. In fact, by the time we made our way back to North Carolina late Saturday evening, snow was impending and we awoke to 2” of snow Sunday morning. There’s so much to do

Plan your trip to Amelia Island and simply attend the Saturday Cars & Coffee and Sunday’s Concours and you will enjoy two of the best days the collector automobile world has to offer. But you will miss an incredible opportunity as there is so much more on offer. Numerous auctions, other car shows, major factories with their newest offerings available for test drives, silent auctions, memorabilia on offer, dinners, book signings…. the list goes on and on. The newest event for 2017 Amelia Island was the Amelia Motoring Film Exhibition presented by Guy Smith and his production company Vintage Auto Television. Noted collector and author Tom Cotter and Sports Car Market Founder Keith Martin, among others, enjoyed adult beverages and hors d’oeuvres followed by shrimp and grits before adjourning to the vintage Florida theatre to enjoy 3 incredible films. The films featured were Guy’s very own “The Red Grifo”, a documentary that recounts one family’s love for the Iso Grifo, Adam Carolla’s “The 24 Hr. War” which chronicled the FORD vs. FERRARI war in the 1960’s. Also featured was “Climb Dancer” a very short but high-octane film featuring Peugeot rally cars from the Gruppe B era. Thanks to Brad Phillips from Hagerty Insurance, the event was off to a great start as the “Hagerty Amelia or Bust Rally” participants rolled in to the parking lot. Plan to kick off your 2018 Amelia weekend with Guy Smith’s Amelia Motoring Film Exhibition, you will be glad you did!

Porschephiles were excited to learn in late 2016 that an East Coast version of the uber successful Werks Reunion had been added to the schedule at Amelia Island. It was held on Friday at the Omni Plantation on Amelia Island with registration opening way back in March 2017. When the dust settled, and the lovingly prepared Porsches were placed on the show field by their owners, past PCA President Manny Alban announced 671 Porsches were registered for the East Coast version of Werks Reunion! The Ingram Collection of Durham NC has supported the Werks Reunion held each summer in Carmel and did not disappoint at Amelia Island. The Ingram Collection, with support by site sponsor the RoadScholars, displayed their 1967 911R alongside their new 2016 911R both in identical livery. Stunning! Also on display was their 1984 911 SCRS in ROTHMAN’S livery, Porsche only made 20 of these Rally Cars and the Ingram’s own 2, the other being an incredible 1500 original mile example. 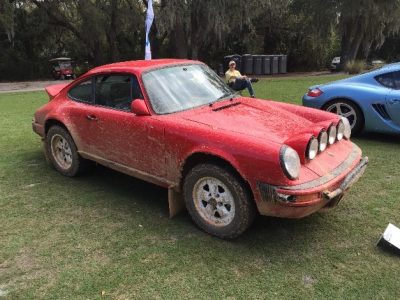 Porsche Rally cars are enjoying a resurgence in popularity thanks to the Ingram’s gracious sharing of their 911 SCRS and also in large part to Leh Keen and Jim Goodlet. Lee was a driver for Brumos Racing and was instrumental in delivering the 2011 IMSA Championship to Brumos, likely the last Championship ever for Brumos. Cars built by Lee are part of the Keen Project and have proven to be popular with most Porsche aficionado’s. In addition, a Safari/Rally 911 built by a team put together by Patrick Long was auctioned off for charity at last year’s Luftgekühlt in California for a record $275,000 with all proceeds donated to funding pancreatic cancer research. Jim Goodlet has built a faithful recreation of the 911 SCRS based on a 1978 911 SC. Jim’s Porsche is quickly becoming known as the “most photographed” Porsche in America! As you gazed around the WERKS reunion show field at 669 immaculate Porsches, it became apparent that Lee and Jim had a decidedly different approach to “concours prep” for their 2 Porsches. It looked as if both had been driven through every bog and field on the way to Amelia Island, they were completely covered in mud!! Ole! Class awards were presented at Werks and as the day drew to a close in perfect late March Florida sunshine, everyone agreed Werks had been a tremendous success and word would spread through the Porsche community quickly. Make plans early to attend 2018 Werks Reunion at Amelia Island. I know I will be back in 2018 trying to improve on my 2nd place Best in Class for front-engine Porsches!

Auctions are a large part of The Amelia experience. RM Sotheby’s was based at the Ritz Carlton and lucky for Werks attendees, Gooding and Company set up shop directly across the street from the Omni Plantation, within walking distance! Many incredible Porsches were on offer but Gooding had the ultimate “piece de resistance” in the 1998 GT1 Strassenversion. The Strassenversion is a 1 of 20 homologated road going version of the GT1 Porsche won Le Mans within 1998! The GT1 hammered sold at $5,665,000. Time for the Concours

It was now late Friday evening, which meant it was time to hustle over to the 10th and 18th fairways of the Ritz Carlton and hopefully catch uncrowded views of Saturday’s Concours participants whose owners wisely chose to park their prized possessions early to avoid the rush of Saturday morning. We were not disappointed. When Bill Warner announced late last year that his Concours would feature a class made up entirely of Brumos racing cars, I bought a ticket immediately and knew full well that I would be happy to simply view the Brumos cars the entire day! Twelve Brumos race cars were carefully placed on the show field with signage describing the significance of each car. It was mesmerizing for any fan of Brumos over the years. After spending a disproportionate amount of time digesting the Brumos cars and realizing the sun was setting fast, we decided to explore the rest of the show field, knowing Saturday would be full of eager car aficionados all vying for the same space around the show cars. As we made our way to the 10th fairway we saw photographers running to a stage that was already completely surrounded by anyone on the fairway that had a camera. Based on the fury and commotion we decided there must be naked supermodels handing out $100 bills and decided to investigate! When we could finally get close enough we realized we were looking at a 1995 McLaren F1LM in McLaren orange, 1 of 5 ever made and certainly a $40-50m vehicle if one ever found its way to auction. Use any superlative you can imagine to describe this automobile and you still come up short. It was then time for dinner at Peppers in old town Fernandina Beach and much storytelling about the day’s activities!

Saturday arrived with slightly windy and cooler conditions on Amelia Island, perfect because we had a tremendous amount of ground to cover. First, back to the Brumos cars to make sure what we had seen the night before was indeed real. Yep, there they were, only now Hurley Haywood, Dan Davis, Harris Snodgrass and Derek Bell were walking amongst them… just when we thought it couldn’t get any better!! Don Ahearn of PORSPORT always displays very tasty racecars from Porsche’s glory days and Don did not disappoint this year. On display was the 1967 Porsche 911 of Porsche American Racing Team fame and it was stunning. Don’s efforts restoring the P.A.R.T 911 paid off, winning the Amelia Award for Historically Significant Racecar. This year the Jaguar D Type was featured in their own class at Amelia and deservedly so, they were placed on the other side of the pond and across the bridge that in years past has featured the Ferrari GTO and Ford GT 40 among others. It is hallowed ground for sure. Porsche and McLaren were on hand in front of the Ritz Carlton with their new offerings. Simply sign up and go for a drive around Amelia Island in the newest Porsche or McLaren! Automobiles are the reason The Amelia exists but people are the reason it thrives year to year. Every year brings together old friends, provides the opportunity to forge new friendships and really allows all attendees to be completely immersed in the world of collector automobiles. We always like to finish our Amelia trip at the Ritz Carlton with close friends, new and old, and a cold beverage and storytelling. This year was no exception and allowed the opportunity to catch up with old friend Gary Crist, retired attorney, Porsche pilot and renowned author. As we said our goodbyes, the message was the same. Same time, same place in 2018.