When a car as fearsome and fast as the latest 911 Turbo S is bringing up the rear, you know you’re in for a spectacular list of supercars. Though each these five were approached in different ways, in different times, with distinct aims, but the through-line with all these is their outrageous speed.

The 991 Turbo S is one of the fastest off the line, with a 0-60 time of just 2.9 seconds. Thanks to the immense torque offered at low revs and a sophisticated four-wheel drive system to take full advantage of the turbo motor’s thrust. At high speeds, the slippery shape and relentless shove get the car up to an incredible 205 miles an hour.

In fourth place: the Carrera GT. The mellifluous howl of the V10 is instantly recognized by any Porschephile. Limited by its layout, it’s not the quickest from a stop, but its 0-60 time of 3.9 seconds is still awe-inspiring stuff in today’s age of launch control. Its LMP-based motor shoves the screaming exotic to a top speed of 207 miles an hour.

Third place is given to the oldest member of the group. The tech-heavy 1987 959 S was a revelation in so many ways, and its remarkable top speed, as achieved on the Autobahn, of 210 miles an hour can be attributed to its slinky shape and the shove of the 2.8-liter, twin-turbo six. For a car more than thirty years old, it’s remarkable how well it stands among the current crop—a testament to its quality and innovation.

The second-place sitter will come as no surprise to Porsche fans. The 991 GT2 RS sports 700 horsepower, driven through a PDK gearbox, which allows it to streak to 60 in just 2.8 seconds—quite remarkable for a machine which drives only the rear wheels. That thrust pushes through the drag caused by the car’s massive wings and onto a top speed of 211 miles an hour. If it wasn’t the current ‘Ring lap record holder for production cars, its straightline speed alone would still render it exceptional.

The title of quickest factory car to ever leave a Porsche showroom goes to the grand daddy: the 918 Spyder. World-class aerodynamics a snarling, hybrid-assisted V8, and four-wheel drive allow the Spyder to sprint to a drama-free 60 miles an hour in 2.6 seconds. The monstrous 887 horsepower and 4WD layout drives it all the way to an unbelievable 214 miles an hour.

For the company’s mid-tier cruiser to be within such close range of their flagship hypercars speaks to the level of design brilliance and commitment to speed that defines every model which rolls off a Porsche showroom floor. 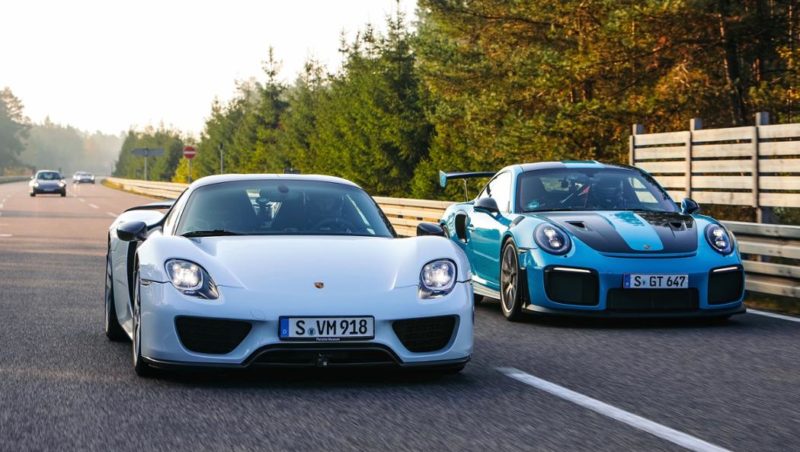 Though separated by a chasm of technology, intent, and price, these two baddies challenge one another for the title of fastest production Porsche, depending on your definition.