Because this weekend marks the Grand Prix du Canada in Montreal and teams and drivers of the IMSA GT3 Cup Challenge by Yokoham have anticipated this race since it was first announced as part of the schedule. The chance to share the Circuit Gilles-Villeneuve with some of the most famous names in motorsports and to compete in front of F1 fans from around the world promises to be a thrill. And several of the drivers in the new Porsche GT3 Cup Challenge Canada have joined the field for this weekend’s event. 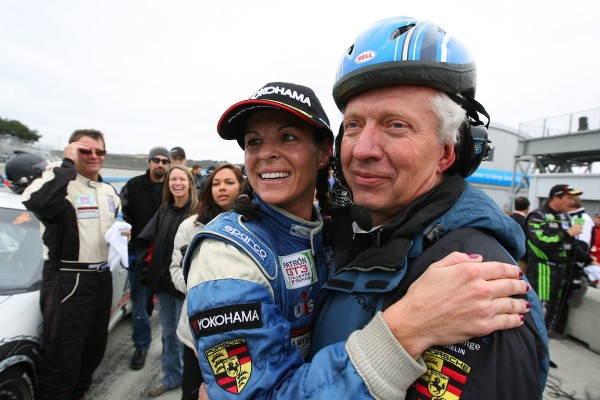 Melanie Snow, driving the #56 Porsche 911 GT3 Cup car for Snow Racing, is one of the few drivers with experience on the famed F1 circuit, finishing third in both races the last time the GT3 series supported the Grand Prix in 2008. But this year, Snow has the added bonus of racing alongside her 15-year-old son Madison in the #62 entry, who squeaked into the series this year (FIA rules state that a driver must turn 16 in the year he or she races – Madison turns 16 on December 26.) Madison Snow is coming off a dream weekend at his home race in Utah, having won both races in the Gold Cup class for 2005½ – 2009 Porsches.

“Being on the podium here is an all-time dream,’ said Melanie Snow. “It’s an unbelievable feeling, to be here with the F1 drivers, up on the same podium they use and driving on the same track that they’re on. This year will be that much more special with Madison here – we weren’t sure they would allow him to race this year because of his age. So it will be great to experience it again with him.”

“It’s a hard track to learn – not because there are a lot of corners, because there aren’t, but because we don’t have a lot of time on the track so we have to learn fast. The track flows really well; it’s just ‘straight-kink-straight-kink.’ So for the drivers, it’s just a matter of figuring out how fast you can go through those kinks. And it’s kind of crazy but there’s a big screen on one part of the track and it shows the cars coming through that section, so you can see yourself on the big screen. There are so many of those types of things that make the weekend so amazing – the atmosphere, the feeling in downtown Montreal. It’s really exciting,” said Ms. Snow, a driving instructor at Miller Motorsports Park in Salt Lake City and ALMS GTC co-champion in 2009.

Info on the IMSA GT3 Cup Challenge by Yokohama

The IMSA GT3 Cup Challenge by Yokohama features semi-professional drivers racing head to head in the largest single-make series in North America. Powered by one of the world’s most successful race cars, the Porsche 911 GT3 Cup car, the multi-class structure of the series teaches drivers essential skills for an eventual career in the American Le Mans Series presented by Tequila Patrón.

Round 5 of the IMSA GT3 Cup Challenge by Yokohama will take the green flag Sunday at 9:15am for a 45 minute race. Live timing, news and schedule information is at http://www.imsachallenge.com/.