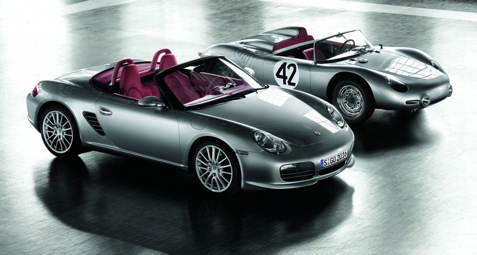 Stuttgart. Dr. Ing. h.c. F. Porsche AG of Stuttgart, Germany, has plans at this year’s Geneva Auto Salon to show off an environmentally friendly and fuel-efficient range of automobiles. The show, staged this year between March 6 and March 16, is traditionally used to reveal the most significant trends for the automobile season ahead.

On the Porsche stand the automobiles on display will range from a prototype of the future version of the extra efficient Cayenne Hybrid through to the Porsche RS Spyder. This, the most successful race car in the American Le Mans Series, achieved its eight overall victories in 2007 using the environmentally friendly E 10 fuel, containing a mixture of 10 per cent by volume bioethanol. What’s more, all second generation Cayenne models are powered by new specially fuel-efficient engines with gasoline direct injection. And these engines use up to 15 per cent less fuel.

In the sports car sector Porsche is using the Geneva Auto Salon to reinforce with the new Boxster RS 60 Spyder which has its Swiss trade fair premiere, and the 911 Turbo Cabriolet and the 911 GT2 Porsche’s decades-long experience in constructing light, efficient and therefore also fuel-efficient automobiles. Even under today’s more exacting environmental constraints, the optimal power to weight ratio of these automobiles (the relationship between the weight of the car and its performance) ensures ultimate driving dynamics coupled with the ultimate driving pleasure.