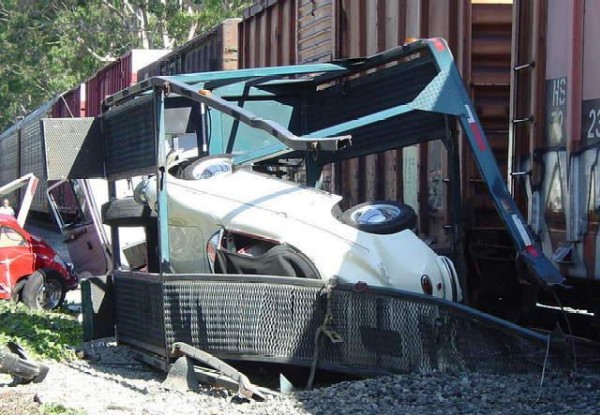 There’s just no way to get around it, Porsches and trains don’t seem to mix well. Wednesday’s train wreck in Dillenberg Germany brought out a lot of emotion in the online Porsche community. Seeing the finished product of our beloved brand strewn all over the tracks is enough to turn your stomach. However, as most of the pictures in yesterday’s post were shot by an amateur from long distance, they didn’t properly convey the carnage with as much emotion as others may have. I couldn’t help but think back to a wreck from a little more than four years ago in Ventura, California. As luck (can you call it that?) would have it, Wayne (CEO and owner of Pelican Parts) just happened to be traveling on the same road when this incident took place. How many of you remember this one?

The accident occurred about 3:45 p.m. near the Ventura County Fairgrounds, said Lt. David Wilson of the Ventura Police Department, who was at the scene. The car-carrier was “high-centered” on the railroad tracks and the driver was trying to maneuver it off the tracks when Wilson arrived. Wilson said he called to have train traffic stopped, but a northbound freight train came barreling down the track only moments later. “We were able to get the driver out of the cab, luckily,” Wilson said.

The driver suffered minor injuries while fleeing from the impact, Wilson said.

The vintage Porsches “are close to totaled, if not totaled,” Wilson said. “The train center-punched the trailer carrying the cars and split the trailer in half, and the cars went flying,” he said.

No crew members on the train were injured, but the front wheels of the locomotive derailed, said John Bromley, a spokesman for Union Pacific. Debris was being removed from under the locomotive late Sunday night and there was no estimate on when the tracks would be cleared, Bromley said. I think the little kid with his hands on his head in the first picture sums up perfectly how I would feel. Fortunately, no one was seriously hurt (other than the cars that is.)