A lot of the people I talk to tell me they think their Porsche is a “work of art.” I find it hard to disagree. The iconic design of the Porsche 911 got its start 40 years ago with the introduction of the type 901 by Professor Ferdinand Alexander “Butzi” Porsche. In fact, today’s modern Porsche 997s (and every model leading up to it) took their design cues directly from this model that replaced the very successful Porsche 356.

The Porsche 911 as a “work of art” I understand; The Porsche Cayenne, that’s a different story. It’s not that I don’t like the Cayene, in fact quite the opposite. It’s just that I don’t think its styling can be put on par with the 911 just quite yet.

As FLATSIXES.com becomes more popular I’m receiving requests from a number of Porsche related companies to review their products (things like Porsche video game accessories, Porsche after market products (RaceRamps coming next week) and now Porsche artwork). I’m happy to do this and in fact, enjoy it. The only thing I make sure that everyone understands is that my review(s) will be very objective. In other words, if I review something, I’m going to call it as I see it, good or bad. Why this disclaimer?

Recently, I received an unsolicited email from someone promoting an artist/sculptor who happened to be using a Porsche Cayenne for their medium. They wanted to know if I would review the artwork/sculpture and write about it. I said sure, why not? I have an open mind. A few days later I received a press release and a DVD that included pictures of the “artwork”. I am not an art critic and my tastes do seem to vary, but this I just don’t get. I’ll post copies of the pictures below and you can be the judge.

Here’s a quick excerpt from the release:

Plamen Dejanoff believes that cars are technical and compositional marvels as well as objects of desire. He engaged an image agency to discover which cars would fit his personality and developed the work titled Alle Autos, die zu mir passen würden (2002), 40 crystal cars produced in a limited edition. One of their suggestion was the Porsche Cayenne, which Plamen Dejanoff acquired with the sale proceeds of the crystal glass car series and which was exhibited for the first time in March 2006 at the MUMOK (Vienna Modern Museum of Art). This black Porsche Cayenne is the centerpiece of the multimedia piece titled Höhere Wesen befahlen (2006/2007), which unites performance and sculpture.

I very much like the crystal cars below. Unfortunately, all fourty (40) have been sold and the proceeds used to finance this current Cayenne project. 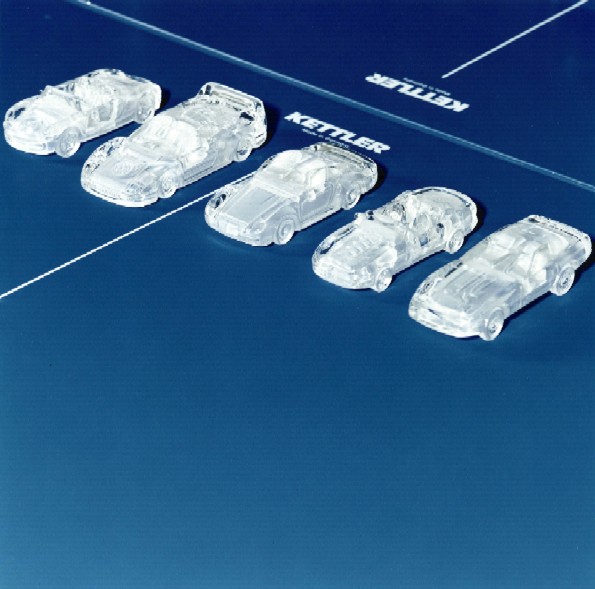 The process began in the summer of 2006 in the art hall of Kiel/Christian-Albrechts-Universität Schleswig-Holsteinischer Kunstverein, where the Porsche Cayenne was brought to the interior of the institution. At the inauguration, the public was participating in the shooting of the first Höhere Wesen befahlen art film. In accordance with the directions of Plamen Dejanoff, the Porsche mechanics meliorated the Porsche Cayenne with the accessorized series titled „Exterieur On & Offroad“.

The second station took place in the forier of Credit Suisse’s corporate headquarters in Zurich, Switzerland. There the Porsche mechanics again supplemented the Porsche Cayenne with the exclusive interior accessories under the watchful eye of Plamen Dejanoff. A film crew taped the action for the second art film, again with cooperation of the audience. Following the shooting, there was an exhibition at the showroom of Michelle Nicol fine arts.

Höhere Wesen befahlen has garnered the interest of well-known curators and international institutions. Through 2008, the artist has been invited to present the work in the form of public exhibitions and single exhibitions with eight renowned art institutions. Works of Art
Each station contains a live documented performance, centered by the Porsche mechanics and the Porsche Cayenne, as well as sculpture ensembles.

Per exhibition-station the following works are generated:

The art film
Featuring the Porsche Cayenne and the refining work of the Porsche mechanics.

The art installation
Consisting of original removed Porsche accessories presented in various ways, and including bronze and crystal castings of the removed parts. They will be exhibited as an ensemble on a platform, referring to the Porsche Cayenne as a performance sculpture.

The refined Porsche Cayenne becomes a sculpture which is individualized from one location to another through instructions by the artist. 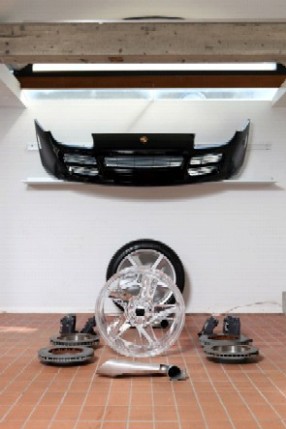 As I said at the beginning, I’m not an art critic so I’ll let you judge the quality of the work. One thing is for sure, at the end of the installation, once the pieces are all put back together, Plamen Dejanoff will still have a very nice Cayenne in the garage.