Over the weekend we were alerted to the possible “leak” of technical specifications regarding the new 991 GT3 RS. While our first instinct was to post it, call it fact and get the clicks, we instead held off and tried our best to verify the info. Unfortunately, we haven’t received any comment back from Porsche (to be expected as if it’s true they really couldn’t comment on it) or any of the others who posted the original documents. Additionally, since we first saw these, everyone else has posted about it so it must be fair game. The list, assuming it’s true, details some pretty exciting figures that we think will add up to an epic Porsche. 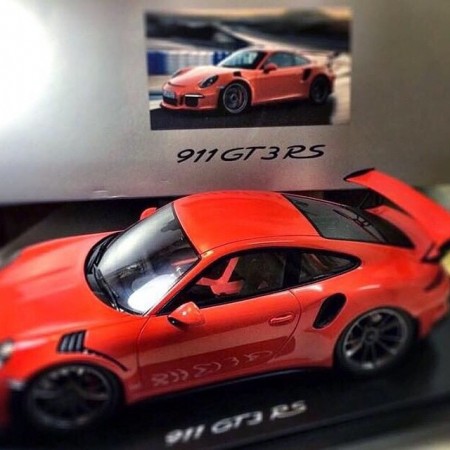 The most important thing we learned from these documents is the fact that this new Porsche is said to be launching in Europe in just a few weeks. We knew the GT3 RS had to be coming soon, but had no idea it would be quite as soon as this document makes it appear. The launch date is listed as the 3rd of March, 2015. It remains to be seen if this is the case.

Of most importance to a lot of Porsche fanatics is the engine. Don’t worry, it’s pretty much as we expected here, no rumored V8s, and no Turbochargers to be found. The 991 GT3 will be powered by a 4.0 liter flat-6 with an impressive 500 horsepower, and an equally impressive 8,800 RPM redline. The engine has all kinds of cool bits to make that happen, like variable intake runners and titanium connecting rods.

Crucially, the leaked document only mentions a PDK transaxle, saying nothing of a manual. We’ve already received hints from Andreas Preuninger that the RS will have an available manual transmission, so don’t freak out just yet. I’d guess that the PDK will be the only available transmission at time of launch, with the manual coming in shortly thereafter. Or, if you’re a conspiracy theorist, maybe Porsche intentionally leaked the document to throw everyone off the scent and showcase a real surprise at the reveal…

On To What We Learned About The Aero

The body of this car is pretty neat, featuring bodywork which is nearly 50mm wider at the front and 30mm wider at the rear versus the standard GT3. Of course there are Carbon Fiber Reinforced Plastic front fenders, front trunk lid, and rear decklid which was somewhat expected, but still awesome nonetheless. That decklid will have the carbon GT3 RS wing de rigueur on aluminum uprights. The doors are made from Aluminum, which was also expected, but what wasn’t expected was that the body shell of the car would also be crafted in aluminum. Even more amazing, the roof of the car is to be crafted from a sheet of Magnesium! Even a downforce assisting rear diffuser will be included on the car from the factory. While things like this have been Euro-only in the past, the list even includes polycarbonate side and rear windows. Sounds like it will be a pretty light machine. [It should be mentioned that this spec sheet if for the ROW version, not U.S. so we don’t know what will carry over and what won’t.]

Add in the fact that this Porsche will come equipped with a set of center locking 9.5 X 20 front wheels and 12.5 X 21 rear wheels, and you’ve got a 911 just waiting to take on track work.

The brake calipers are listed as being ‘Red’ in color, which tells me that the car is equipped as standard with Iron rotors rather than PCCBs (which will more than likely be optional). Click on the images below to see the document we saw.

So, the important questions are, are these specs for real and if so, do you have your order in yet?