Porsche is the latest in a long line of companies to build super fast concept cars explicitly for Polyphony’s Gran Turismo series of racing video games. Always dubbed Vision Gran Turismo, these cars allow major manufacturers and their designers the opportunity to go flat out without regard for anything that would actually ever be available for sale. This car will only ever exist as pixels on a screen or as a 3D model rendered in reality without any kind of actual application other than aesthetic. While part of me thinks that is an okay trade off, I’m currently concerned because Porsche’s all-electric supercar Vision Gran Turismo is totally the kind of car I’d love to drive. “A vehicle designed purely for the virtual world opens up exciting possibilities for us that are otherwise heavily regimented in a regular design process for a series production car,” says Michael Mauer, Vice President Style Porsche. “Projects such as the Porsche Vision Gran Turismo are particularly valuable for us in the creative process. Further developing our clearly defined Porsche Design DNA and exchanging with designers from other industries is an important part of our work.” 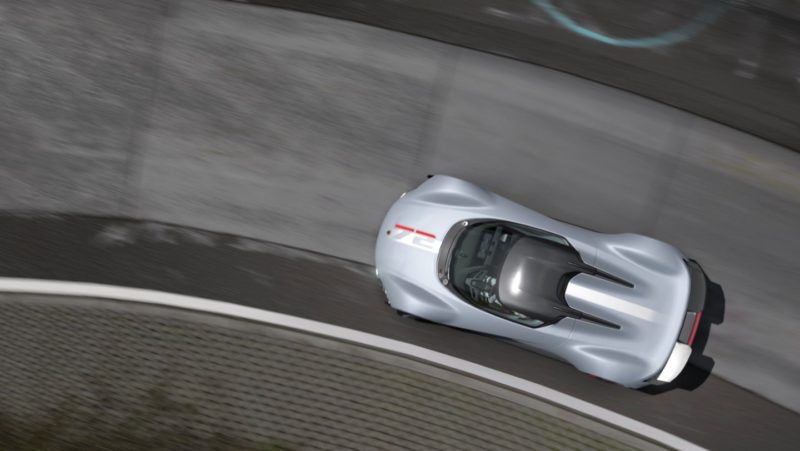 Obviously there is a lot of current Porsche DNA in this Vision Gran Turismo concept, as it keeps the company’s proportions well in mind, while giving the car a visual link to the current design of the Taycan and 911. At the front you can see the company’s signature light pattern, and at the back there is a nice light strip “heckblende” that apes similar design cues from the company’s line of sports cars. The link between this digital car and Porsche’s current lineup doesn’t stop with the exterior, though. Inside the fighter-jet cockpit there is a curved hologram display floating above the steering wheel which keeps the traditional Porsche gauge layout. “We spent a long time considering the right material design consisting of carbon and titanium. The aim was to reduce weight while increasing performance,” says Markus Auerbach, Head of Interior Design at Porsche. “In addition, sustainable aspects also play a role in forward-looking projects. For example, we only used entirely vegan materials in the concept car.”

“The appeal of a Porsche comes from its purist design,” says Kazunori Yamauchi, President, Polyphony Digital. “And in terms of engineering expertise, both we and Porsche follow the same perfectionist philosophy. We share the same passion for racing and are looking to the future of the car.” Alright, so theoretically how quick is this machine? What powers it? Why can’t it be real? According to Porsche this totally digital car contains an 87 kWh battery, which is slightly larger than a base Taycan with the smaller battery, but smaller than the Taycan’s optional Performance Battery Plus. It offers a pretty impressive 310 mile range on the WLTP scale (theoretically) from that battery, but don’t expect quite so many miles on a real race track with plenty of full-throttle applications. On overboost for short bursts the electric motors at the front and rear of the car supply just shy of 1300 horsepower to all four wheels, meaning you can accelerate from 0-62 in 2.1 seconds and 0-124 in 5.4! The theoretical top speed of this power and shape vehicle is said to be around 217 miles per hour. The thing that makes this more than just a styling exercise, however, is the fact that Porsche has an intense relationship with Rimac Automobili, which only makes electric hypercars like this in real life. Perhaps a multi-million-dollar Porsche is coming to a dealership near you with specs exactly like this. Or perhaps it’s just a video game and we should stop worrying about it.