The upcoming Gooding & Co. auction at Pebble Beach during Monterey Car Week is bringing a foursome of Porsche Spyders to the auction block. My personal favorite 911, the one-off Bertone Roadster design study of 1966 is among them. If you’re going to be at Car Week this year, you’ll definitely want to check out Gooding’s star-studded Porsche lineup, and stick around to watch them sell (or bid, if you’re so inclined). 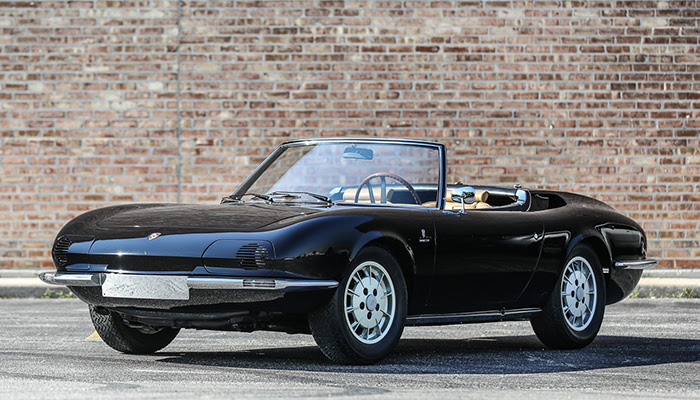 The Bertone Roadster made its debut during the 1966 Geneva Auto Show. Developed as a fully functional design study by John Von Neumann to test reactions for a convertible Porsche (prior to the 911 Targa’s arrival). The American market was complaining heavily that Porsche no longer offered an open top model after the demise of the 356, and this was one potential solution to that problem. This roadster no longer looks anything like a 911, having been designed from the ground up by Italian firm Bertone with typical Italian flair, but perhaps that’s what makes it so striking. It’s a unique 911-based model that has survived all these years, and now it could be in your garage. The Bertone Roadster isn’t as originally shown, as the engine was swapped for a later high-performance 1967 911 S 2-liter, the color has been changed from Carmine Red to black, the original wheels have been swapped out for a set of Mahle “Gas Burners”, and the interior was swapped from a parchment interior to the saddle color you see now. Even though it lacks a bit of its originality, it’s still an incredible piece of Porsche’s history that deserves preservation and appreciation. 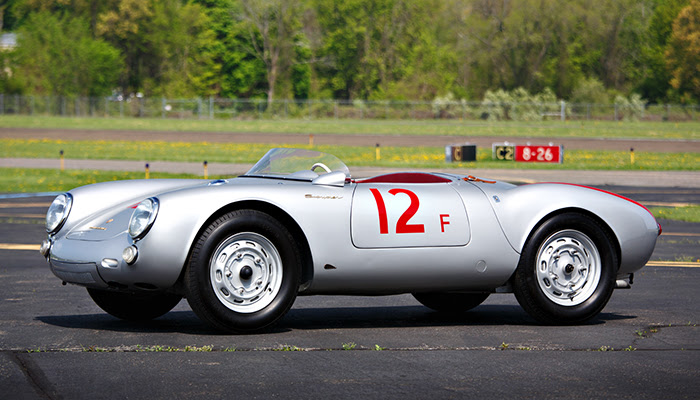 This 550 Spyder was originally owned by a Sacramento, California man named Eldon Beagle, who purchased the Porsche new from Oxford Motors and raced the Spyder all over the west coast to reasonable success. The car is claimed to have suffered just one DNF, and Beagle’s sons don’t recall the Porsche to ever have been seriously damaged, which seems to be corroborated by the 550’s originality. By the end of the 1956 season, Mr. Beagle had purchased a second 550 Spyder to race and sold this chassis to Jim and Mary Richeimer in Ohio, who towed the Porsche back east behind their Datsun wagon. It bounced around to a few different owners before being fully restored beginning in 1986. The engine was rebuilt by Bill Doyle and the bodywork was done by Tom Selby, so you can rest assured that it was a quality restoration. The seller purchased this Spyder from Paul Russell And Company back in 1999, and since then has seen occasional service by the late Doyle. This spring the Porsche was given a once-over by Jeff Adams at Speedsport Tuning who claimed it to be one of the best 550 Spyders he has encountered, including a numbers matching engine and transmission. Only 34 of these 718 RSK Spyders were built, and this one (Chassis 718-024) was sold new to famed American racer Ed Hugus. The Porsche was delivered to Le Mans, France in 1959 where Hugus paired with Erickson, but did not finish the race. From there, Hugus shipped the 718 to the US where he sold it to Don Ives in early 1960 for an attack on a scad of SCCA regional events and even a run up Pikes Peak where it set a 16 minute 45 second run in the days when the full course was still 100% dirt! Since then, it’s been vintage raced and displayed sparingly. It presents quite nicely, though does not have its original drivetrain. It isn’t likely you’ll see many Porsche historic models with both Le Mans and Pikes Peak provenance, making this a quite unique lot. Porsche’s RS Spyder LMP2 effort, just over a decade ago, was something for the history books. This program garnered Porsche a trio of ALMS championships in a row, as well as an overall victory at the 12 Hours of Sebring, and two class wins at the 24 hours of Le Mans. Competing directly with LMP2 efforts by Acura, and diesel LMP1 machines from Audi, Porsche frequently came out on top. About 15 examples of the 9R6 LMP2 chassis were built, making this one of Porsche’s more scarce racers. This particular RS Spyder was purchased by a newly formed team for the 2007 season called CET Solaroli Motorsports who issued a release saying they would join the American Le Mans Series for the 2007 season (the RS Spyder’s second season) with drivers JJ Lehto and Johnny Herbert. Despite that news, the team never raced, and the Porsche was eventually sold to a collector. This Spyder has never been competitively raced, and has only been displayed to the public ever at Rennsport Reunion V and the following year’s Monterey Motorsport Reunion. Whoever buys this needs to vintage race it immediately and frequently.

All images copyright and courtesy of Gooding & Company. Photos by Mathieu Heurtault.