RM Auctions will be expanding their calendar yet again with a new event in Paris, France.  Set to be a fixture on their schedule for the foreseeable future, the event corresponds with the Paris Retromobile event, and should bring in a lot of interest.  The highlight of this event is the sale of the very private Harburg collection, which houses a number of significant Porsches, as well as cars from Ferrari, Aston Martin and Jaguar. From the Porsche camp, there are five cars of significance that will cross the RM block in France.  We will cover, in detail, the three cars that RM is currently previewing on their site. The 917/30 is widely known as the ground pounding turbocharged Can Am destroying rocket that Mark Donohue took to the 1973 championship.  We all know the stats; 1200 horsepower, 12 cylinders, two turbos, four giant sticky tires, two large black stripes coming out of every corner, and the stainless steel balls required to drive the car.  The 917/30 is a larger-than-life racing machine that was built not only to be fast, but to be insanely fast.

This Porsche is the intended successor to that car, and began life as a chassis made to contest the 1974 Can Am season for Penske.  As soon as Penske found out about the rule change that would effectively eliminate the 917 from competing, the car went unfinished and unfunded.  From there, it apparently floated around the shop for a number of years before being sold to Gerry Sutterfield in 1979 who finished building the chassis into a complete 917/30 for his collection. In 1989, Sutterfield sold the car to Hans Thulin, who added it to his private museum in southern Sweden.  The Porsche would stay with Thulin for two years until his world came crumbling down around him.  Thulin had alledgedly borrowed several times against the same securities, and this resulted in his failure in business, his eventual bankruptcy, and the bankruptcy of his lender, Optima Bank.  In the liquidation of his assets, the Porsche was sold to an undisclosed Japanese corporate collection (believed to have been the Meitec Corporation, and engineering consultancy).

In 2005, the Porsche was moved to an anonymous private collector.  The anonymous party is still unknown [at least to the general public], but the 917 was sold again in 2011 to John Collins of Talacrest who owned it for less than one month.  Purchased in October and sold again in September, Collins sold the Porsche to a previously unknown buyer, who was expected to race and show the car at worldwide events.  The unknown buyer must have been Harburg. When originally built, the Porsche was painted in this livery.  When the 917 was sold in 2011, it retained its original white-and-stripes paint. Based on RM’s pictures it would appear that Harburg must have repainted the car in the fashion of Penske’s winning 1973 livery. RM has not yet released any pre-auction estimates yet, but I wouldn’t be surprised to see a final bid around $4 million on this wild turbo terror. The 904 is my favorite design of all time.  It is, hands down, the most beautiful thing to ever drive about on four wheels, and this one is a complete masterpiece.  An ex-Dickie Stoop racing car, the 904 has seen a lot of action on English racing circuits, including Snetterton, Silverstone, Goodwood, and Brands Hatch.  904/045 was the first Porsche 904 delivered to England, and was originally painted in Irish Green, rumored to be the only one of its kind in this shade. Stoop was a well known English racer who had been contracted with the Frazer-Nash ‘factory’ team, having taken class victories for the brand at Le Mans, among others.  When the Frazer-Nash distribution chain in England moved to Porsche cars, Stoop purchased the 904 seen here for racing.  In the above photo, Stoop is seen picking up the car from the AFN dealer, W.H. Aldington.  Mr. Stoop owned the car through his death in 1968.  From that point the 904 was purchased by a Pennsylvanian collector, where it was housed with a number of other notable Porsches.  The car moved to a third owner in Australia presumably before being moved into the personal collection of Mr. Harburg.

As of the time this is posted, RM has not yet published any photography of the 904, so it is unclear what color, condition, or trim in which it will be presented.  We have no doubt that RM will sell a phenomenal car, and should be worth at least $3 million dollars.  As such, here are some photos of the car’s past, and hopefully we will be able to update with new photos from RM in the coming days. At one point, Stoop took his 904 to mainland Europe for competition in a hill climb championship.  Evidently he stopped by the Porsche factory at that time, as here is a picture of the 904 and the Dickie Stoop tow rig outside of the Restaurant Christophorus in Stuttgart.  The BMW sedan hauling a 904 on a cobbled together trailer is an interesting sight, and difficult to comprehend that a 904 was “just a race car” back in the 1960s. It is unclear exactly when this photograph was taken, but it depicts the car during the time in which it resided in Australia.  Curiously, its gorgeous Irish Green paint has been (seemingly poorly) painted over in a bright white shade, and Carrera stripes have been added to the rockers.  Here’s hoping when new photos of the car surface that it is in its original color. Wearing a uniquely 80’s set of BBS Turbo Fan wheel covers, the Porsche 956 on offer here is a stunner in iconic Rothmans’ livery.  The fourth car built, this one has an extensive history as a dedicated Porsche Werks Group C competitor.  The 1982 Le Mans 24 was the first outing for this chassis, and it ended with a handy third place in a Porsche podium sweeping 1-2-3 finish.  Holbert, Haywood, and Barth drove to take up the last space on the podium that day, giving 956-004 its first podium of four in its career, never securing a victory. 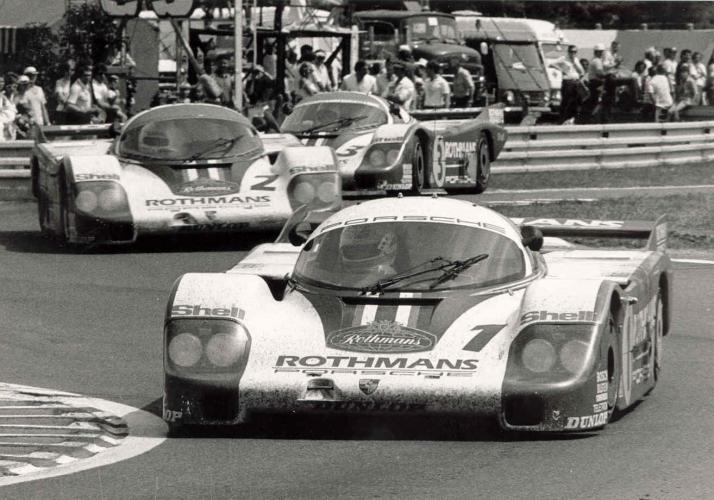 Even though 956-004 has never won a race, it has certainly housed some very famous names, and graced many famous tracks.  Derek Bell, Vern Schuppan, Jacky Ickx, Jochen Mass, Stephan Bellof, and the aforementioned trio of Al Holbert, Hurley Haywood, and Jurgen Barth all drove this Group C machine.  As for the courses, this Porsche has been to Spa, Silverstone, Fuji, and Monza three times each, Le Mans twice, and one trip each to Kyalami, Sandown, and Brands Hatch.

RM attempted to auction this Porsche at their Scottsdale auction in 2007, but it was a no-sale at two million dollars.  As an official Porsche factory team car, having been driven by some of the best Porsche had to offer at the time, this car will surely be able to fetch more than that in February in Paris, right?

Also mentioned in the RM press release for the collection is a 1959 356A Carrera 1500 GT Speedster and a 1987 959.  The Gooding auction in Monterey saw a Carrera Speedster sell for a bit over a million, so we could potentially see another million plus 356 sell in Paris.

RM’s inaugural Paris auction will be held at Place Vauban immediately after the International Automobile Festival, 29 January to 2 February 2014.