UPDATE: For more info check out Magnus Walkers car for sale. Last night, in-front of a huge crowd, history was made when the gavel fell on Magnus’ STR II for the final time. With a selling price of $275,000 this Porsche went nearly 2x the original estimates (as we predicted in our original post below). What’s even more interesting is who bought this car. More on that in an upcoming post. Picture taken during the heat of the sale via Magnus Walker

Have you ever just looked at a car and known it was a piece of art?  Something that someone has put a lot of time and effort into in order to achieve the exact desired look.  An artfully done car is inspirational, and an artfully done Porsche is doubly so.  Magnus Walker has always taken his Porsche builds seriously, but from the outset, I could tell that the 1972 911T project, billed as the “STR II”, would be wholly different.  A new level of detail and individuality went into this Porsche, and it certainly shows. 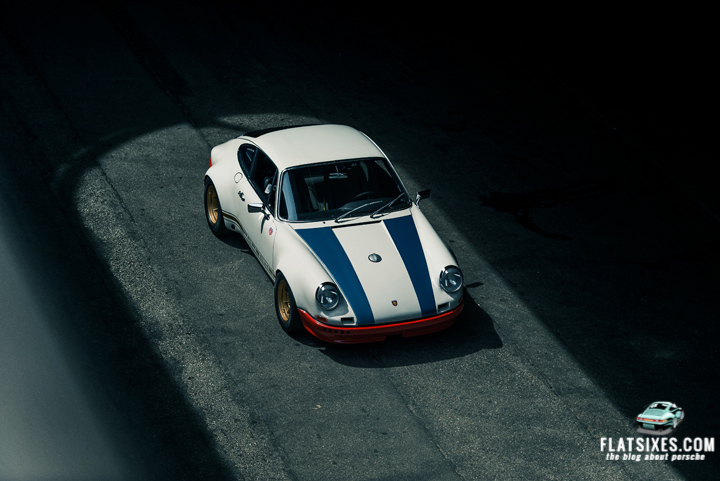 If you have ever been to a hot rod car show, you know that all of them are “unique”, but they all incorporate many of the same unique features, making them less unique.  Occasionally, something truly original will stand out from the crowd and completely overshadow the remainder of the field.  In the world of “unique” Porsches, this STR does exactly that.  Taking many concepts that are well known, such as the ST flares, the 911R tail lamps, the 911S front bumper, and the Carrera stripes, then remixes them in a different way, creating something new.  The little things are what really make this car, however.  The use of an early screw-in interior mirror, for example, or the earlier chrome trim rings on the gauges, were an odd choice, given the year of the car, but the perfect choice aesthetically. 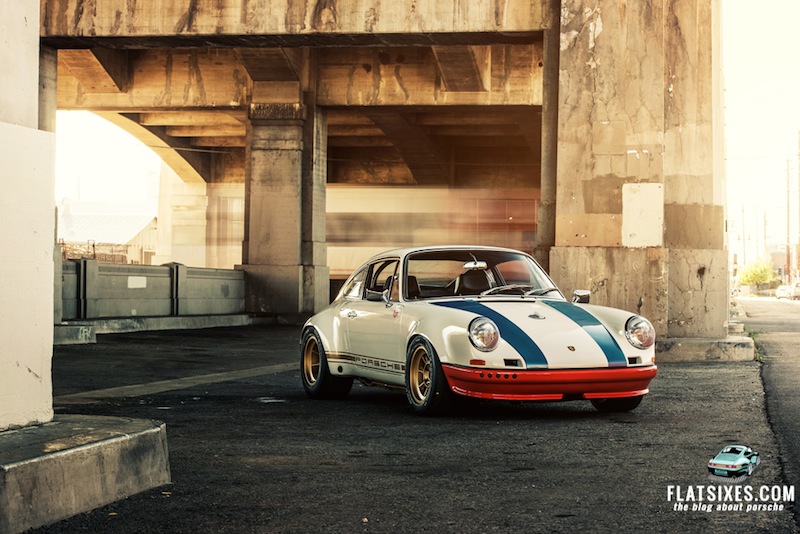 It has been said by many, including me, that wheels make the Porsche, and this one is no stranger to that concept.  Group 4 PAG rims in 15X8 front and 15X10 rear look outstanding in this application, and when mounted with the 225/50 front and 275/50 rear Hoosier R-Compound tires, supply more grip than you can practically handle.  The ultimate culmination of the early Porsche aftermarket, this car is loaded with trick suspension bits from Elephant racing and Tarrett Engineering, dampers from Bilstein, and  designed to help those wide tires grip even harder.  Judging just by the numbers, this Porsche is built to corner. So it’s beautiful, and it can carve up the twisty bits, but how does it move?  Pretty well, I’d venture. The original engine has been ditched in favor of a short stroke 3.2 liter build, making use of 9.5:1 compression and S camshafts combined with a modified mechanical fuel injection setup to produce a bit more power than stock.   The custom inch and five-eighths 3-into-1 headers collect into a M&K Stainless 2-in 2-out 911R style muffler creating a raucous symphony to go with your artistic driving experience. In all, the Porsche is an absolutely raw experience, combining some of the best aspects of 911 builds from the past 50 years with a few new hot-rod “Magnus-style” tweaks.  In something of a new venture for Magnus, this is the first of his builds that has ever come to market, and will be available for sale at the Gooding Auction in Pebble Beach, August 17th and 18th.

As Magnus’ Porsche community shooting star continues to rise, however, expect the prices of his cars to go along for the ride.  With a nice stock 1972 car fetching upwards of $70 grand and above these days, I wouldn’t expect anything less than 6 digits for this gorgeous example, and I wouldn’t be too surprised if that first digit were a 2.  It’s been on the cover of Road & Track and Total 911.  It’s been profiled on Adam Carolla’s CarCast, as well as the “Jay Leno’s Garage” internet show.  It’s been on Fifth Gear driven by Tiff Needell, and recently filmed a segment for the upcoming season of Top Gear USA.  With all of the publicity this Porsche, and Magnus himself, have been getting lately, I’d venture that it won’t be long before he has his own star down in Hollywood. For even more build info check out magnuswalker911.blogspot.com