There are some of us in the automotive culture that are somewhat more insane than others.  We are tweekers, seeking to shave the ever evasive extra second from our elapsed times.  We are addicted to a drug called grip.  We spend our summer Sundays praying at the paved church of the heavenly orange traffic cone.  We are autocrossers, and we have a problem.  It is exactly this kind of problem that would cause someone to build a 1957 356 Speedster into the cone-shagging parking-lot carving monster you see here. Don’t call this car an “outlaw”, however, as it predates the outlaw movement by a number of years.  This car is something all its own; unique, to say the least.  This Speedster is about as high tech as a 1957 Porsche can be, with all of the bits and baubles crafted and grafted from later Porsche cars.  It’s a bit of a Frankenstein’s monster, in terms of using the best pieces Porsche had to offer, as well as a bit of custom engineering in the spirit of Porsche. The car began life innocently enough, as a beautiful Ruby Red example with black interior.  In the late 1960s, the car came to the attention of one Bruce Anderson.  Mr. Anderson had made the decision that this Speedster would be a winning cone dodger.  The car, chassis number 83714, began a new life as a competition machine, wearing bulged fenders to fit over 906 15X7 wheels and 356C disc brakes, the suspension was adjusted, providing a low and squat look, and the car was repainted in a Nevada Silver available on contemporary Cadillacs.  It was the absolute talk of the 1969 Porsche parade. Anderson took 83714 to battle in the large and flat parking lots of the greater Bay area.  The battle was against the best E Production classification had to offer, in the form of well-prepared Austin-Healey and Lotus cars, which the Speedster handled with aplomb.  When things started heating up, Anderson built a hot motor to handle it, using an 1800cc “Badger” big-bore conversion combined with a Hirth roller bearing crankshaft for stratospheric revs.  In this configuration, the car won for more than a decade.  In the early 1980s, however, under racing conditions, the car lost control, breaking through a chain link fence, and crunching the front right of the car against a tree.  The car was parked, and didn’t see daylight for nearly another decade. It was in the early nineties that Dan Rowzie heard tell that the car was still around.  Rowzie had been at the Porsche Parade in 1969, and he had seen the kind of spectacle that 83714 had created.  In Dan’s mind, the Caddy Silver Speedster was the 1969 Porsche Parade, they were one and the same.  For years afterward, Rowzie had dreamed of building something similar, and for a brief time in the seventies, had even had his own roller-crank 1800cc Speedster special. Through some creative “It’s a small Porsche world” communication, Rowzie ended up buying the speedster from Anderson, and it was then extricated from its storage facility in Palo Alto.  The car was shipped to Car Creations in Scotts Valley to be reborn into a new chapter.  Once the bent and broken parts were stripped away, those involved were given an opportunity to see the project for what it really was: a blank canvas.  The car was already a bit of a bastard child, it would never again be seen as an “original” Speedster, and Rowzie was sure that this wasn’t what he was looking for anyhow.  A “no rules”, no-holds-barred, Dream Speedster was the plan, then. In keeping with a common theme, Rowzie wanted to build something that was completely different, eye catching, and an absolute ball to drive.  Everything was based, originally, around a close ratio 911 gearbox, and built out from there.  The front suspension was swapped out for a 944 A-arm type, the steering was changed for 924 manual rack-and-pinion manipulation.  The braking is now handled by 944 Turbo rotors and calipers, and controlled by an RSR-type dual master cylinder assembly.  The wheels are custom affairs, bespoke designed by the late Boyd Coddington in 17X7 front (205/50R17), and 17X8 rear (255/40R17).  Several engines were discussed, built, and then decided against for longevity purposes, so eventually a Super 90 engine was installed and Rowzie drove the car, never quite happy with the power level. 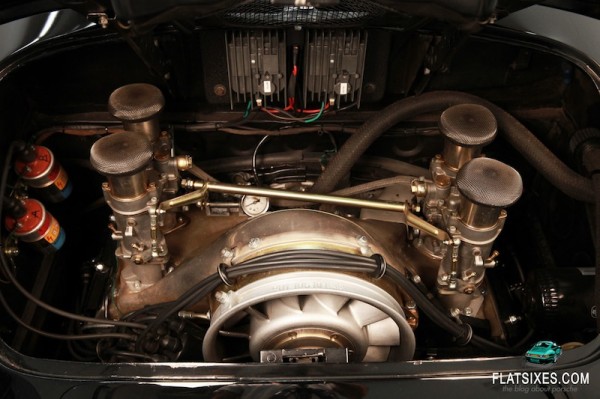 In 2002, the Super 90 had reached the end of its usable life, and Rowzie was, again, in a pinch with the car.  In preparation for the 356 East Coast Holiday in 2005, it was finally decided to use the old 1.8 liter roller-crank Badger engine that had come with the car.  This effort won Dan a first-place trophy in the Outlaw class, and he was as proud as a peacock, but still not satisfied with the engine situation.  This dissatisfaction continued through 2007, when Dan finally found a solution he thought would be perfect for the car.

Advance Performance Engineering in Temecula had been working on a new project that appealed to Dan.  Dean Polopolous, of APE, had developed the POLO engine, an air-cooled flat four cylinder engine, based on two thirds of a 911 engine.  The POLO engine involves a custom made case, custom crankshaft, custom camshafts and cam towers, etc.  A very expensive proposition, these engines have been coming in between twenty-eight and thirty-two thousand dollars depending upon custom application. Rowzie ended up deciding on a 2.4 liter iteration of the custom four cylinder, aiming for between 180 and 200 horsepower, giving him the power he’d been lacking.  The engine arrived in late 2009, and a set of custom exhaust pipes and a pair of Weber 48 IDA carburetors, the engine was installed.  Retaking delivery in 2010, Rowzie now had the Speedster he was looking for.  In its fourth or fifth iteration, the so-called “Bandido” Speedster had a happy owner again. Begging for no forgiveness, Rowzie atones for his Speedster sins by saying “Messing up a Speedster is probably not popular.  This car already had extended rear fenders and massive front-end damage.  Those issues may make what we did okay.”  Dan admits that he isn’t sure he’s ready to move the car on to a new owner, but in the same breath also explains that the 3 decade long journey with the car has been fruitful and he’s gotten what he wanted to out of it.  A perpetual tinkerer, Rowzie is ready to move on to the next project, likely an R Gruppe-style short wheelbase 911.

If you are interested in becoming the next steward of this phenomenal machine, Dan is offering it on consignment at an asking price of $340,900.  You can rest assured that nobody will ever have another one like it.