Update: Here’s info on the 2011 Porsche Carrera Speedster. Once again another Seinfeld Porsche has crossed the auction block and sold at what some might say is a premium price. Last week, at the Barrett Jackson auction in Scottsdale Arizona, Seinfeld’s 1994 Porsche 911 Speedster sold for $101,200 (that price includes a 10%) buyer premium.

Before you go crazy saying that’s way too much money, consider this; the car was ordered new by Jerry Seinfeld and options include an RS spec 300 bhp 3.8 liter M64 engine (vs. standard 3.6). Other options include RS Speedline 18” wheels (reportedly a $12,000 option), LSD, full leather (including instrument surround) and color matched hand brake, door pulls and shift knob. 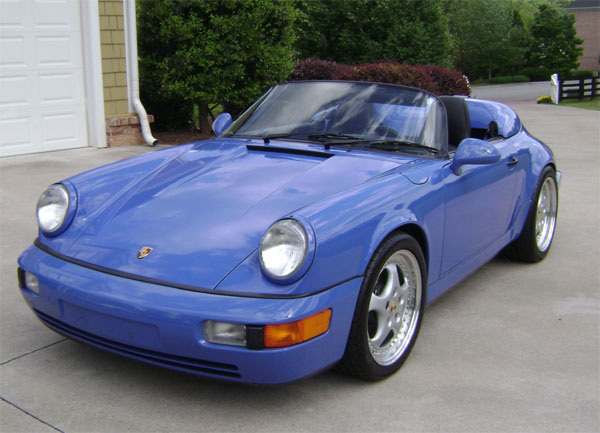 Porsche did not sell an RS spec Speedster in the US, so this particular car was delivered to Andial, Porsche’s US performance division, with a US spec engine along with all the factory RS parts. At Andial, Porsche Factory technicians disassembled the engine and installed the factory RS parts. The engine features Carrillo rods, RSR 3.8 Liter pistons and cylinders, 993 sport cams, modified oil pump, modified air cleaner, flowed heads with racing three angle valve seats, light weight flywheel, new EPROM, and sport exhaust. Considering that normal speedsters, of this year (if you can call them normal), are bringing $50 to $60k for cars with 15,000 to 20,000 miles, then this highly optioned, low mileage (less than 10k miles) celebrity owned, Porsche 911 speedster might just have been a very good buy. That is, if you can overlook the blue surround on the gauges. 🙂