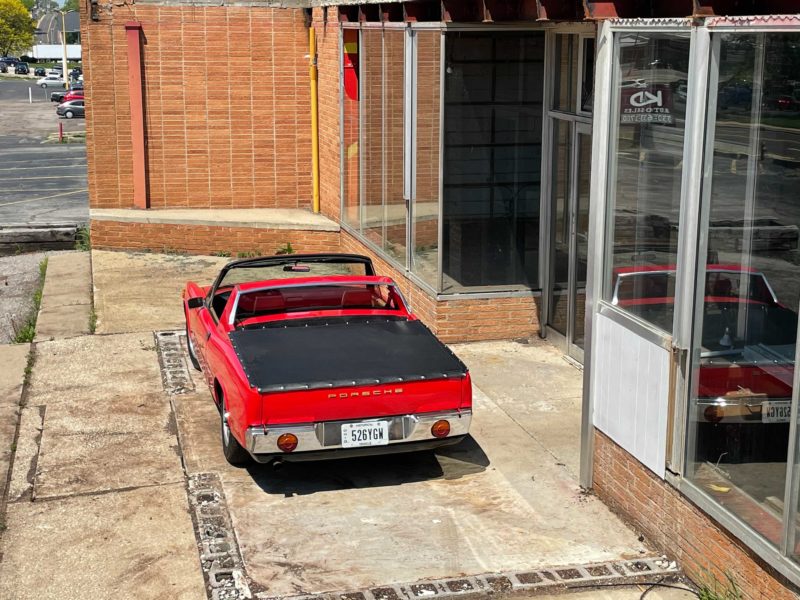 Dick Troutman and Tom Barnes are no strangers to building magnificent cars. They combined to form one of the best known coachbuilders in Southern California, creating legends like Lance Reventlow’s Scarabs, Jim Hall’s first Chaparral, a weird four-door 911, and many other racing and roadgoing contraptions. Some of their designs were beautiful, others purely functional, but everything served a purpose.

In the early 1970s Troutman and Barnes found a rear-ended 914-6 for sale from the Aase Brothers, and negotiated to purchase the body for a pickup conversion. While getting the deal done, Dave Aase asked Dick Troutman if the coachbuilders would also convert a second rear-ended 1972 914-4 at the same time. Troutman and Barnes made it happen, and the only two 914 Pickups ever brought into the world were born. 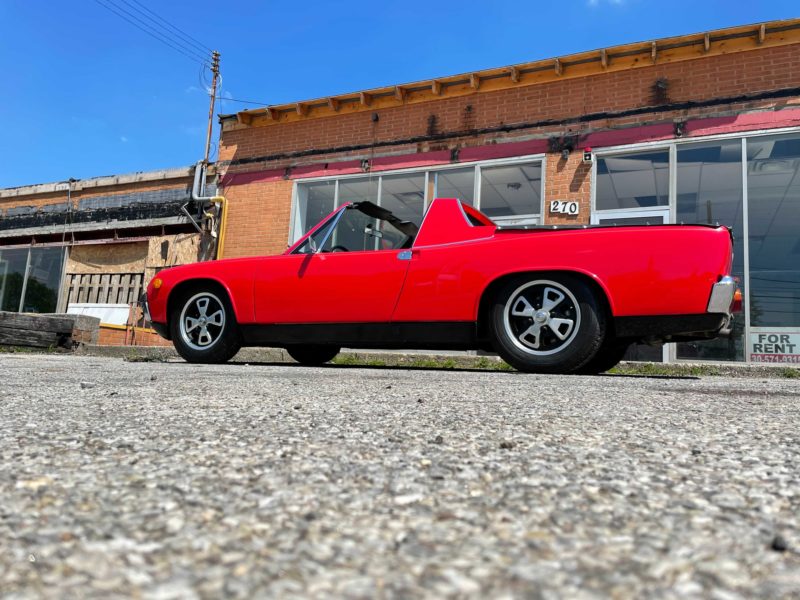 The 6-cylinder car is still around and kicking, having been converted to race spec by Gunnar Racing, decked out with big flares and the works. The car pictured here is the four-cylinder workhorse owned by eclectic collector Myron Vernis of Akron, Ohio. I recently had the opportunity to travel to far-flung Akron and drive this little pickup around for a while. It was a pure joy, let me tell you.

This 914 started its life as a bog-standard 1.7-liter, and from a mechanical standpoint it’s still basically exactly as it left the factory. The interesting stuff starts to happen aft of the engine compartment. Originally painted in Irish Green, the 914 must have been a stunner from the factory. When the Aases sent the car off to Messrs. Troutman and Barnes, they had it repainted in a deep brown with gold ‘Aase Bros’ hand lettering on the sides of the pickup bed. For years the 914 was used as a truck should be, doing the yeoman’s job of hauling car parts for one of the biggest Porsche scrapyards in the world. It wasn’t much, but it was honest work. As you can see from the photographs, the 914 pickup still operates exactly as a 914 should, but without a finicky torsion-bar rear trunk lid. Troutman and Barnes added nine inches of bodywork to the back of the 914, giving it a bespoke one-off elongated rear which still incorporated the original chrome rear bumper. The 914’s unique hard targa top had stowaway points in the rear trunk, and this 914 pickup conversion retains those. The plastic forward holders and “latch cups” are intact, while new stands had to be made from the bed sides to hold the rear of the targa top. It’s a truly genius solution to a problem most conversion shops would have simply ignored altogether. It’s almost factory, really.

With a full spate of Tenax fasteners screwed into the body around the truck bed, and a custom-made bed cover, the truck looks like a finished piece. Not only is the bed cover an aesthetic choice, but it helps keep smaller items out of sight and secured inside the bed. If you aren’t carrying full-sized items like fenders or wheels,

In the mid-1980s a Porsche collector had to have the car and gave Dennis and Dave Aase an offer they simply could not refuse for their old shop truck. Already a decade into service as a work truck, it had seen better days, but it was a one-of-two part of Southern California Porsche culture, and for that reason it needed to be preserved. It stayed in use for many years, keeping a place in Bill Jackson’s collection as a gardening car. When Bill decided to offload his entire collection, he rightly called the Ingrams at Road Scholars. While under the eye of Road Scholars, the truck got a light restoration. By that time the brown paint was well out of favor, and the shop decided to have the truck repainted in a bright sports car red. It was also at this point that the car’s finicky Bosch D-jetronic fuel injection was replaced with a simple Empi downdraft carburetor setup. We actually first spotted this car at the Road Scholars shop back in 2010, before it was sold to its current custodian.

Myron is a dear friend of mine, and he is the kind of collector that the Porsche community needs more of. Despite this being basically the only car of its kind with a story as unique as anything else and being utterly impossible to place a value on, he was more than happy to toss me the keys for a few hours of driving. Of course, we have to spend quite some time shuffling cars around in his sprawling warehouse of oddities and oddballs. Oh, here’s a custom Oldsmobile built by Rod Emory’s grandfather. And an Ohio-built Porsche-powered sports racer. And a Porsche tractor. And the first 356 he bought for $500. This place is heaven for an enthusiast. And pretty much everything in here, from the Barris Corvette to the Honda concept car are driven fairly regularly, as they should be. When we pull the 914 out and get it fired up, the car brums to life like every good type-four powered machine should. It’s a little more choppy on cold start than it might be if it had kept its fuel injection, but so many 914 owners have ditched the Bosch system that this is pretty typical if you’re familiar with Porsche’s mid-engine machine. The 1.7-liter has always been my least-favorite 914, but that’s a bit like saying ‘my least favorite slice of pizza’ even the worst 914 is still a great drive. The engine powering a 914 is pretty much the least important part of the driving experience anyway. The chassis is the real star here. I still can’t believe Porsche released this genius platform in 1969, because it truly feels like a chassis at least twenty years newer than that. It’s composed, tight, mature, and delightful in even the worst conditions, like say the pothole pockmarked streets of suburban Ohio. In typical 914 fashion, the shifter is about as vague and unpredictable as the ending to American Psycho. The dogleg 901-based gearbox is pretty OK in a 911 or 912 application, but flip the drivetrain around for a mid-engine application and add another four feet of shift rods to muck up the whole thing, and you get a gearbox that feels a bit like stirring a jar of peanut butter. This isn’t unique to the 914 pickup, it’s a trait all 914s have, and one you just get used to. The shift throws are so incredibly long that with the lever in first gear — as a larger man with lifesaving thick thighs — it wants to occupy the same dimensional space as my right leg and the steering wheel at the same time. The shift from first to second is only possible when you’ve delivered the sacrificial lamb to the transmission gods, and even then only about eight times in 10. More often than not, I found myself missing second and chunking into fourth, which is entirely unwelcome. After a while, the gods cut you some slack and you learn that second is ever so slightly left of center on the shift pattern. Even knowing that, it’s easy to miss. Taken individually, there are a lot of things one could gripe about when driving a 914. But you wouldn’t dare, because taken as a whole the experience is positively transcendent. Not only was this an incredibly responsive chassis for its time, it still holds up as among the best chassis ever built. Even using off-the-shelf componentry from the Volkswagen and Porsche parts bins, it manages to be perfectly balanced, as all things should be. Modern cars, including Porsches, are chasing ever faster lap times with grip and power and techno-wizardry. The 914 isn’t winning any speed competitions these days, but with only your feet and hands to control its motions, and tall skinny tires to chatter along the pavement, this is a long-gone driving experience you just can’t buy on a new car lot today. Driver involvement comes in spades, making you stay up on your toes with every rev out, every gear change, every negotiation of every corner. It’s around 2000 pounds of pure fun. It’s not a fast car, it’s not a comfortable car, hell it’s not even a good car, but it’s a great car. The key thing about the Troutman and Barnes pickup conversion is that it takes absolutely nothing away from the 914 driving experience. It drives just as terribly, and just as amazingly, as any other 914.

Why it’s the best pickup ever

Have you seen trucks lately? They’re massive hulking behemoths of iron and diesel with ever more impressive spec sheets. They have a thousand pound-feet of torque, or they can tow as much as a tractor trailer, or they can fill the bed with lead bricks. Think back to the 1990s, and you may recall that compact pickups were everywhere. Trucks like the Ford Ranger, Chevy S10, and Toyota Pickup (yes, it was just called Pickup) littered the road, and served incredibly well for homeowners who needed to pick up bags of mulch, or lawn care companies who needed to haul a push mower and a weed whip, or even weekend warriors towing a bass boat or hunting gear. Hundreds of thousands of small pickups found owners throughout the 80s and 90s, and they didn’t need big power or heavyweight bodies or luxury appointments to make it happen. Heck, Ford Rancheros and Chevrolet El Caminos sold in huge numbers at one point, too. My kingdom for a compact pickup that actually drives like a sports car.

The average pickup owner doesn’t need to haul a million pounds or tow the Statue of Liberty, but they’re forced into bigger trucks with higher specs and larger price tags every day, because that’s what OEMs and dealerships want to sell you. For someone like me, a homeowner with some landscaping work that needs to be done, this 914 pickup would be perfect for me. It’s the kind of vehicle I could use to haul some bags of sand or flowers for the garden, or some wood to build a deck (properly secured, of course). But at the same time, it’s the kind of vehicle I could hustle on a gorgeous mountain drive with the roof off, and my face plastered with a pair of dark sunglasses and an undying smile. This is a dual-purpose machine with a few flaws, but it’s all the better for them. It’s a little slow, so you have to push it hard to get the most out of it at legal speeds. It’s a little chunky to drive, but you just have to become one with the car and learn its foibles. This is an unapologetic car, one that doesn’t beg forgiveness, or so much as ask for it. It is what it is, and it demands you change your life to fit it perfectly. And once you’ve done that, you can see how it’s the perfect puzzle piece for your weekend driving needs. Whether your weekend is a hunting excursion, a trip to the home improvement store, or a mind-clearing drive on your favorite road, this 914 is here for you. Porsche built a great sports car, and Troutman and Barnes made it a great pickup.