I’ve said it before and I’ll say it again. When it comes to Porsche, I’m a purist. I like my Porsches stock, straight from the factory. It’s not that I don’t appreciate modifications and the extra performance (or in this case utility) that comes with them, I just prefer things the way Porsche meant them to be. That’s why creations like Harry Thomas’ Porsche 928 pick-up seem to bowl me over with their audacity.

Thomas is a collector of all things fast. Unlike some, he’s not a one marque collector, as the Ferrari’s, Merecedes and Lamborghinis in his garage will attest to. Even with all these, arguably, unique supercars at his disposal. Harry still yearned for something dfferent, something that would stand out on the street (Ferrari’s and Lambo’s don’t stand out?) Taking a page right out of the Porsche history books, when he couldn’t find what he was looking for, he decided to build it himself.

Take one very rare, late model Porsche 928 GTS (world-wide there were only about 2800 produced), a grinder and some cutting tools, one extra axle and a twisted imagination; combine with some extra HP and hi-quality fabrication and what do you get? Harry Thomas’ one-off dual axle Porsche 928 pick-up that he claims, based on engine mods, will perform as well as the original. My favorite quote from the video:

When you put a grinder or a saw to a car like this, it hurts a little bit…

Dohh, you think so?

Here’s the video for you to judge for yourself. What do you think of this type of mod?

Surprisingly enough, his 928 pickup doesn’t stand alone. There were/are at least two other 928 pickups I found while searching. Here are a couple of pictures for you. 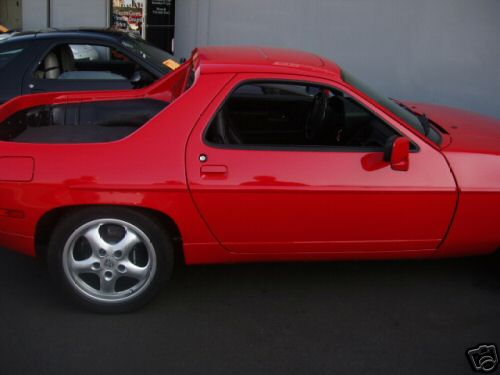 What are some of the strangest Porsche mods that you have seen?