Purity be damned, early water-cooled 911s and Caymans do lend themselves well to V8 swaps. In most cases the engine winds up right where Porsche intended, taking place of the flat-six. While this can require fiddling with the bulkhead in mid-engined cars, drivers do seem to welcome the update. A French custom shop, however, is taking a different approach. Rather than putting a compact LS-series V8 under the rear decklid, they’ve opted for a much larger Hemi.

This isn’t the first 911 Danton Customs has built, either. The French shop has built a V8-powered front-engine 964 as well, showing it off in Monaco last year. 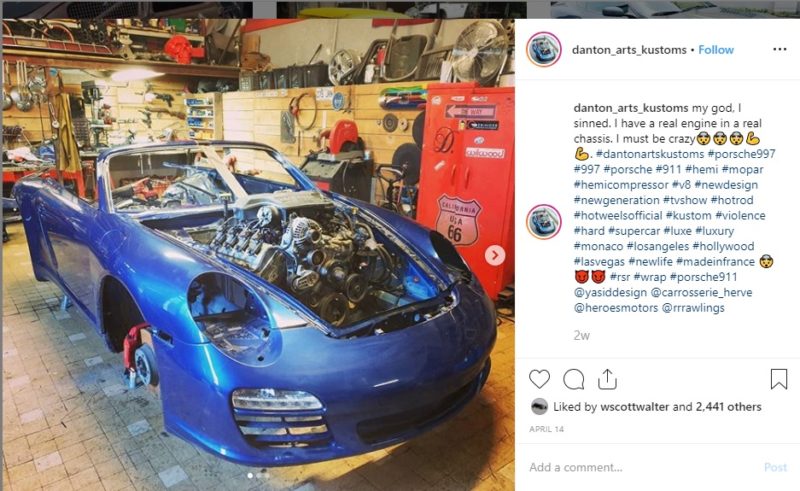 However, unlike the LS-swapped cars, Alexandre Danton has opted for a more traditional and very un-Porsche engine placement. Now with the engine up front where the fuel tank used to be, this 997 is apparently destined to forever lack subtlety. Renders from the builder show their intended path with this car, which apparently includes a tall supercharger, some wild aero, a roll-cage, and a skimpy bikini roof. This is certainly not a car for introverted types, and by most measures it isn’t really a Porsche any longer. What do you think of this 911 Cabriolet Hemi? Is it a step too far?

Check out @danton_arts_kustoms on Instagram when you get a chance to see the renderings, some of their earlier crazy hot rod projects, and to follow their progress with this weird build. Personally, I like the rear louvers and the use of the 993-style rear tail light and heckblende system. It’s certainly unique, I’ll give it that.