No, it wasn’t lost. It’s just that I didn’t know where it was, until now. Ever since I wrote my first post about the Porsche Tapiro I’ve become more and more curious about the car, it’s brief but explosive history and what happened since its debut at the Turin Motor Show in 1970. Fortunately, I’ve had the opportunity to meet a great many Porsche fans since I started writing this blog and a number of them went out of their way to help fill in the blanks. If you haven’t already done so, I would encourage you to go back and read my original post “The Porsche Tapiro by Giorgetto Giurigaro” in order to familiarize yourself with the car, its designer and a history cut short, supposedly by a terrorists bomb. 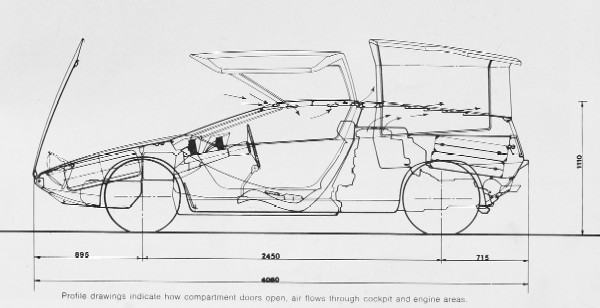 I’ve tried contacting the good people at Italdesign Giugiaro SpA a number of times. And while they do respond to my inquires, I think something gets lost in the translation between my questions and their answers. As a result, I’ve worked on piecing together the Porsche Tapiro’s history from my growing list of contacts. If, after reading this post, you can help fill in another piece of the history, I would love to hear from you. Thanks to long time reader Ben Salvador, I was able to salvage some of the pictures seen in this post, a great article about the Tapiro’s design, and more importantly, the next step in its history. In my last post I had incorrectly stated that the Tapiro was purchased by a wealthy Spanish industrialist immediately following its debut at the Turin Motorshow. This is not the case. Instead, ownership of the car was retained by its creator and the car subsequently made its US debut at the 5th Annual Los Angeles Imported Automobile and Sports Car Show in 1971. The Tapiro was not sold into private hands until 1972.

According to published accounts (there are unpublished accounts that vary greatly from the official story and I’ll go into those in a later post), the show car was sold to a Spanish industrialist who used it as his daily driver for a while until a group of labor activists engaged in the time-honored European tradition of anarchistic demolition and planted a bomb under the Tapiro. The burnt shell was repurchased by Italdesign and put on display in its Giugiaro Museum.

What I Would Still Like to Know about the Porsche Tapiro

Any help would be greatly appreciated!!!

Related Posts
Porsche Tapiro by Giorgetto Giugiaro
Porsche, Gravity Racing and Zero Emission Race Cars
A Porsche Model Like no Other
Porsche Automotive Dioramas
Info on Butzi Porsche and the Design of the Porsche 911