An electric Porsche is not a new idea. While in the employ of Jacob Lohner & Co Ferdinand Porsche developed an electric drive system consisting of hub mounted electric motors. The first production car off the line, using Ferdinand’s design, was introduced in 1898 and known as the System Lohner-Porsche. This simple, “carriage-like car” was driven by two electric motors attached directly to the front wheels and powered by batteries. While decades ahead of its time, the System Lohner-Porsche was limited in range and speed by the exorbitant weight of more than 3600 lbs worth of lead batteries. Originally commissioned as a purpose built racer, the car “showed wonderful speed when it was allowed to sprint” but proved to be too heavy as a hill climber. Inspired by the possibility of creating a vehicle capable of record breaking speed and competing in hill climbing events Ferdinand combined an internal combustion engine with a generator designed to drive the electric hub motors. For added reliability he included a much smaller and lighter battery pack than what was found in the original System-Lohner Porsche. This new design was introduced in 1901 as the Mixte. Capable of speeds up to 35 mph (56 km/h) Porsche created the first petroleum electric hybrid vehicle on record (and possibly the first 4×4 too.) 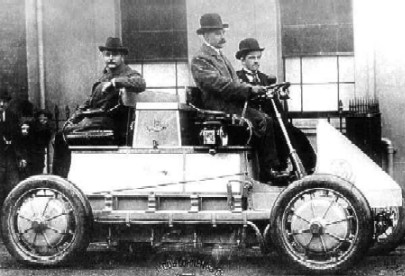 This past week the German car site Auto Motor und Sport reported that Ruf will introduce an electric Porsche based on the mid-engined Cayman. Powered by a suite of lithium-ion batteries, the Ruf is expected to reach top speeds of close to 125 miles per hour, making it an easy competitor to the Tesla roadster already in production. Overall power for the Ruf is expected to come in around 150kW (equivalent to about 201hp) and 650 Nm (that’s more than 490 foot lbs of torque to you and me.) While the horse power numbers are considerably lower than the 245hp available on the standard Cayman, the weight savings achieved by removing the engine, combined with the incredible torque numbers should more than make up for the difference.