When was the last time you were truly blown away by something? What was the last thing you viewed where the quality and craftsmanship were so superbly rendered that you were actually left speechless? It doesn’t happen to me often, but when it does, it’s a great feeling and usually I want to tell everyone as loud and often as possible. Not so in this case. At first I was hesitant to even publish this article. Not because I didn’t think it would be well received, but rather because I didn’t want to share. You see, Wilco Machiels just may be the Michaelangelo of automotive dioramas (if there can be such a thing) and I want one of his creations for myself before his demand and popularity grows to the point where I can’t afford one. Actually, as it stands right now, I can’t afford one. So, I thought maybe, just maybe I could send him enough business and publicity by way of this article to help negotiate a better deal. 🙂 Hey, you can’t blame me for trying. His stuff is just that good! Read on and you be the judge… Wilco’s interest in model building began innocently enough at the early age of seven. Like most of us he started with your basic aircraft and military vehicles and progressed from there. Unlike most of us, his extraordinary skills were apparent even at such an early age. However, his interest in automotive modeling didn’t take shape until his apprentice work with the prototype department at Volvo Netherlands in 1985. He felt that by recreating his work environment (and the items within it) he could further enhance his “finishing” skills. Notice the calipers on top of the tool chest. Now that’s detail.

Every diorama that I make begins with a detailed model kit of a classic car, sometimes with further models being cannibalized for parts in the diorama’s garage. I love the nostalgic garages of the 1960’s – dirty, a little cluttered and rather disorganized and untidy – I like to recreate them just the way they were. More than 20 years later, Wilco has become a true master and his finish/modeling skills are second to none. Working exclusively in 1:24 scale Wilco creates his dioramas at his own leisure. While I can’t imagine ever wanting to part with any of these masterpieces, thankfully Wilco can – and does – on occasion sell off his creations as his hobby room gets too crowded. In addition, for a few lucky souls Wilco will consider taking work on a commission basis for those that have seen his finished product and would like something similar that represents their car or collection. Over the years, I have made dozens of diorama and, when my hobby room becomes too crowded, I sell them. These days I also undertake specific creations at the request of people who have seen my work and want to own an example themselves.

As I write this post it dawns on me that I simply can’t come up with enough superlatives or adjectives to give the proper respect that Wilco’s work deserves. The only way to truly appreciate his skill is to experience it yourself, either in pictures or if you’re lucky enough, in person. The pictures above are but a small sampling of Wilco’s work and focus exclusively on Porsche. For many, many more pictures and, for lots of other automotive marques, be sure to check out Wilco’s gallery. If you do decide to purchase one (or commission your own) don’t forget to let Wilco know where you heard about him! I’m still trying to work out my own deal. 🙂 Better yet, if anyone is feeling really generous, feel free to purchase one and send it along. I won’t mind at all. 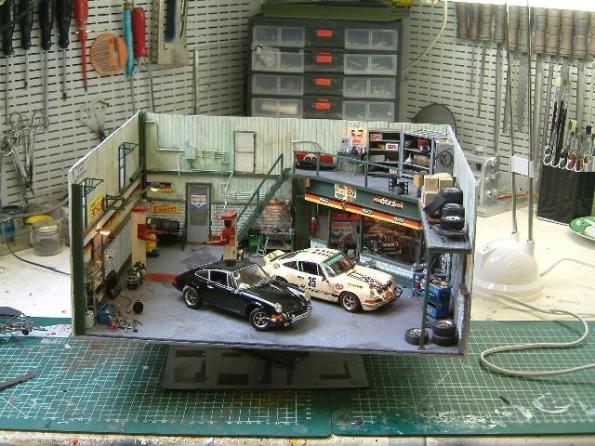 Related Posts
Would You Be Able to Tell That This Porsche Garage is Actually a Diorama?
Scale Model Porsche 934 Turbo RSR by Tamiya
A Porsche Cayenne as Sculpture by Plamen Dejanoff
History of the Porsche Design Group
Porsche Design Kitchen. Can you cook in a Porsche?