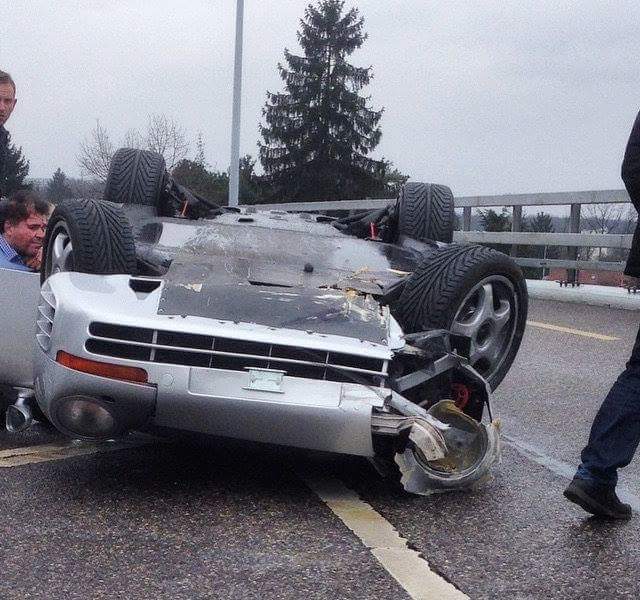 It’s always a crying shame when stuff like this happens. Porsche’s 959 is a rare, extraordinary, and legendary piece of machinery, so losing one has to be a lot like losing a family member. You would imagine that after years of searching to find the right one, that the car would have to be special to its owner, right? As such, I can’t imagine the emotions of the Swiss owner of this Porsche, seeing it bent and broken like that. It may be able to be fixed, but it won’t ever be the same.

The roof is crushed, the front suspension is collapsed on the driver’s side, and there’s a whole lot of Kevlar bodywork that is completely shattered. The rear clamshell alone would be tens of thousands of dollars to replace. I don’t even want to guess at what it would cost to fix this, and I feel sorry for the person who is stuck with the bill. If nothing else, perhaps they could make another 959 Speedster, like this one. These photos started showing up around the internet yesterday, and we were waiting until we had a little more information before posting about it, but not much more could be found, even on German and French language websites. Most of what we know is information gleaned from these photos. So, here is our “expert” analysis of this 959 crushed in photos.

The license plate – From the tags, we can tell that the car is registered in the area of Geneva, Switzerland using the two coat-of-arms on the tag. The “U” designation on European plates seems to denote that the car is currently registered to a dealership or automotive service center.

The Tires – There are only two tires that have ever fit the 959 rims. The OE spec tire is the Bridgestone RE71 Denloc that uses the Dunlop Denloc bead system to make the tire one of the first ever self-supporting run-flats, which has a different tread pattern. Canepa Design is known to modify the lightweight magnesium rims of the 959 to accept a modern Michelin tire without the Denloc bead system. Perhaps these are those.

The Rain – Yeah, it was wet out when this happened. That’s a common occurrence in Europe in the early spring, so that bit is not entirely surprising. What is surprising is that the owner would take such a valuable car out in the nasty weather. I applaud them for doing so, because Porsches are meant to be driven, but sometimes discretion is the better part of valor.

Being that we don’t have all of the information on this one, we can only hope that the driver and passenger (if there was one) are okay. With the roof collapsed like that, it could easily have caused injury. Here’s hoping that our fellow Porsche fanatics are all okay. If you have additional info, please let us know in the comments below.