Rennsport Reunion VI was among the most memorable automotive events in my recent memory. The showmanship involved on the part of Porsche’s employees, their pride in the brand’s history, and their willingness to talk about nothing but Porsche for the week of Rennsport is commendable. The event went off without a hitch, and I’m sure it took absolutely hundreds of willing and able volunteers. It was definitely well worth attending, and I will definitely be at the next one. Here’s what my three-day adventure looked like.

The Momo Road To Rennsport 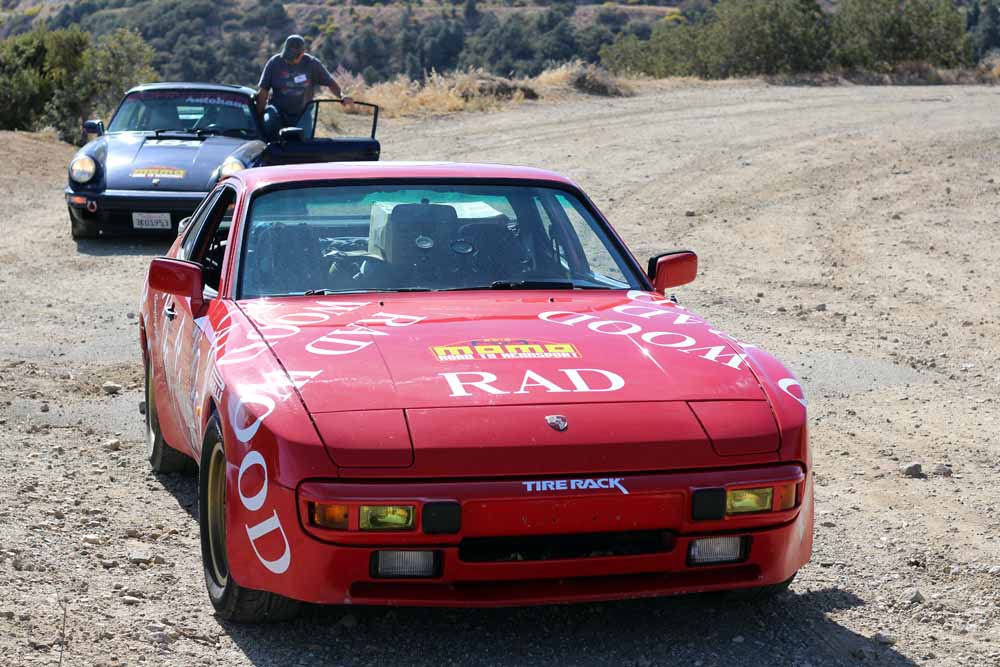 I was invited on this cool one-day rally up the spine of California by Momo, and I couldn’t turn that invite down. Early in the morning of the Wednesday prior to Rennsport I drove from my home in Reno, NV to a friend Lane’s house in Santa Cruz, CA. Lane joined me on the Momo rally in the above 1984 Porsche 944. It’s a European example with no sunroof and Pasha interior. It’s a ton of fun. Lane and I are co-founders of the Radwood car show for 80s and 90s cars, and this car is something of a marketing device for the show. With a Hugo Boss-inspired livery, it certainly gets attention, and it performed like an absolute champ. We piled in the Rad44 and headed further south to Santa Clarita for the start of the event.

Thursday morning The Momo rally began, and it was a good time, all in all. There were a few things that could have been done better, if I’m being honest. The rally began in a crowded shopping center parking lot, and emptied out onto a busy road, meaning the 100-plus contingency of Porsches was separated out into small groups of two or three cars by a traffic light. The second minor complaint is the complete disorganization of the lunch stop at Willow Springs Raceway. Those are minor issues, however in a long day of incredible roads and awesome driving. We eventually hooked up with a pair of Carrera 3.2s for a nice post-lunch drive to the race track. We were all paced pretty well with each other, and had the roads to ourselves, by and large. I spent most of Friday hanging out in the paddock scoping out the awesome cars that would be on track through the weekend. There was a wide selection of modern and classic Porsches. I was perhaps even more enamored with some of the awesome street cars.

One of my favorite anecdotes of the weekend was a small Q&A session with Vic Elford, Gijs van Lennep, and Gerard Larrousse. Gijs, who won the 1971 Le Mans 24 at the wheel of a Martini-entered Porsche 917, mentioned off hand why his car had success and both the cars of Elford and Larrousse suffered failures. Evidently in 1971, Porsche 917s suffered from a failure of the bolts that hold the engine cooling fan to the hub on which it spins. These fans were spinning at something like 15,000 RPM on the long straights, and when the bolts would fail, the fan would shoot skyward a hundred feet into the air like a tiny helicopter. As soon as the Martini team heard about this failure, they rustled up a collection of new bolts. In order to prevent stress failure, the team would remove and replace one of the fan bolts at each pit stop. They could complete the replacement without losing time in the pits, and they would simply replace the next one in line at the next pit stop. Obviously this wasn’t the only thing that won the team its 24 Hour success, but it certainly contributed.

Upon hearing the story, both Vic and Gerard stared at Gijs in shocked silence. “I never knew about that,” exclaimed Elford when it was his turn to talk. The room laughed raucously. No Porsche historic event would be complete without a huge contingency of racing cars on track. Everything from the newest 919 Hybrid Evo (which did not set a record, by the by, it was about 2 seconds shy of Ferrari’s Formula 1 car) to the first 356 ever built hit the track with verve. The debut of the new 935 dovetailed nicely with everything else there, as it was a throwback to the good old days. I think I watched about fifteen sessions of racing through the weekend, but only managed to photograph a handful of them on Saturday, as I’d forgotten my zoom lens for the Friday showing. And finally, here are a few photos that I shot mostly in the Chopard historic display tent of some interesting views that caught my eye. Did you know that you could get a 959 with Pasha interior? I didn’t know that.