It isn’t often that a Porsche is invited to roll across the lawn at the prestigious Pebble Beach Concours d’Elegance. And when one is, it’s not likely you’ll see another grace the same grass in the same year. Such was the case this year when Road Scholars, the Raleigh-based Porsche restoration specialist shop, was invited to bring a freshly-done 356 America Roadster to the concours from the delightful Ingram Collection. This was the only Porsche on the grass, and it scored third in class, as luck (or restoration skills) would have it.

“I am super proud of our of team in the way they pulled off this build in such a short period of time,” said Cam Ingram, Co-owner of Road Scholars. “Usually, a restoration takes 2 to 3 years but with the dedication of our team we pulled this one off in almost 7 months. It’s a huge victory to just be invited to Pebble Beach but placing 3rd with the tough competition is almost unheard of for a Porsche. When we found out the Ingram Collection’s America Roadster was accepted to compete late last year, we wanted to give the car the best chance to win and that meant to completely restore the car. The car was previously restored in the mid 80s but was not near the condition it needed to be in to win, despite its history.”

The 1952 Porsche America Roadster Type 540, once owned and raced by John Crean and Josie Von Neumann (step-daughter of John), was entered in Class O3 for post-war sports cars. In that class, the Porsche faced stiff competition from the likes of a Le Mans-winning Ford GT40 MkIIB coupe, and a one-of-one Maserati A6GCS Frua Spyder, which placed first and second in class respectively. While the Porsche’s one-of-sixteen rarity would normally be a small number, by keeping this kind of company it is positively ubiquitous in comparison. The seven-month restoration must have been an absolute hustle to complete, because the car looks spectacular in photographs. 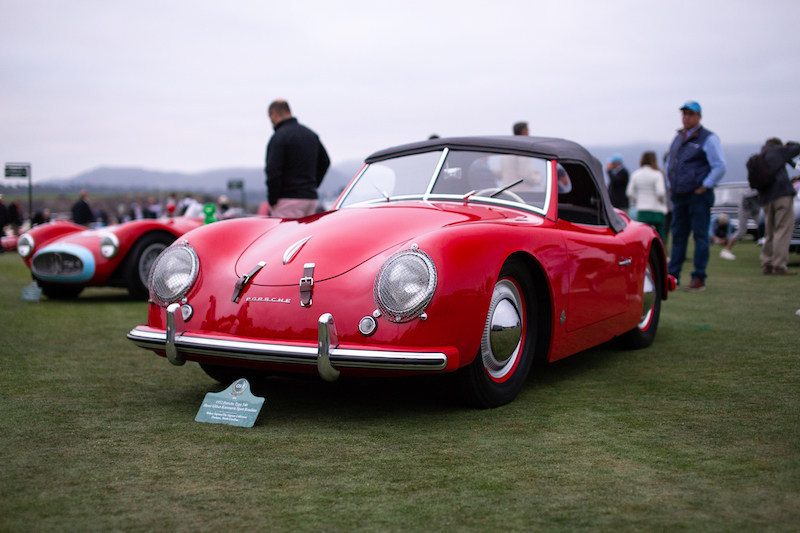 This marks the fourth time this decade that a Road Scholars-restored car has been recognized for elegance at the Pebble Beach event. The shop has taken home first-in-class hardware twice, once in 2011 with a 1949 Gmund coupe, and once last year with a 1952 Pre-A Cabriolet. The company also took home a third-placed award in 2013 when they brought a 1975 Porsche 911 Turbo.