What the heck is Luftgekühlt? For starters, that’s the German word for “Air Cooled” (pronounced louft-guh-kewlt). In addition it’s also the name of the Porsche world’s coolest (pun intended) car shows. Last weekend Porsche factory racer (and one of the most dedicated Porsche enthusiasts, might I add) Patrick Long decided to host a gathering of the marque’s most famous cars. The site was Deus Ex Machina in Venice, California, and only the best vintage Porsches were invited to attend. Everything from pristine museum cars to R Gruppe and “outlaw” hot rods, all of the air-cooled beauties there were carefully hand-picked by Patrick to draw a crowd. Boy, did they ever deliver. 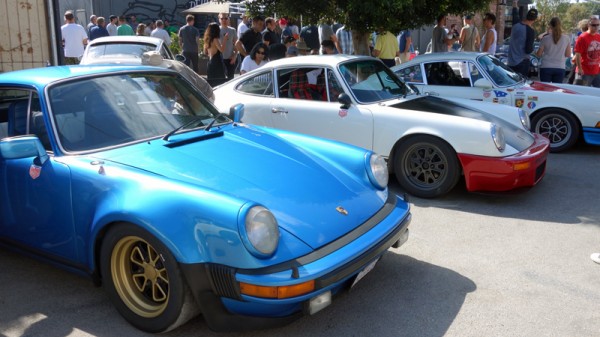 What cars were there that people might recognize? Well, Magnus Walker brought his iconic #277, as well as one of his many 930s, and his SC/HR. Our friends at Truspeed Motorcars brought along an ex-Paul Newman raced 69 911S. Patrick Dempsey was there with his personal 356 Cabriolet. FLATSIXES.com’s newest sponsor, Nicolas Hunziker had his ‘White Mouse’ on display. Singer Design brought along their well known cream-colored special (Singer #002). Chad McQueen was there. Racing driver Tomy Drissi was there. Even Porsche brought along a handful of cars to show off. It was a veritable who’s who of the vintage Porsche world. Being that this was the inaugural event for Mr. Long’s pet project, it couldn’t be called anything but a success. As it were, FLATSIXES.com’s newest roving contributor, A.J. Gordon from the Petersen Museum, was in attendance at the show. A.J. chatted with Long, Dempsey, Walker and McQueen and captured it all on audio. This week’s episode of his “CarStories” podcast is dedicated entirely to the show, and all of those interviews are well worth listening to. If this event is held again next year, make sure to brick off some time to go check it out! Oh, and Pat, if you’re reading this, we’d accept an invite for Boxster Project Clubsport if one were offered, even if it isn’t Luftgekuhlt!