Porsche’s newest high-performance driving experience, the 911R, doesn’t have a rear wing, or any other kind of easily visible downforce-creating device, on the back. So how can it possibly manage high speeds without becoming scary to drive? How does the 911R keep its composure during high speed curves or rapid transition lane changes?

When the 911R launched, the head of Porsche’s GT program, Andreas Preuninger, was immensely proud of the engineering that went into the car’s rear diffuser. With a bit of witchcraft and wizardry, the GT program’s engineering team managed to produce enough downforce to keep the car planted at speeds without even adding so much as a Gurney flap. 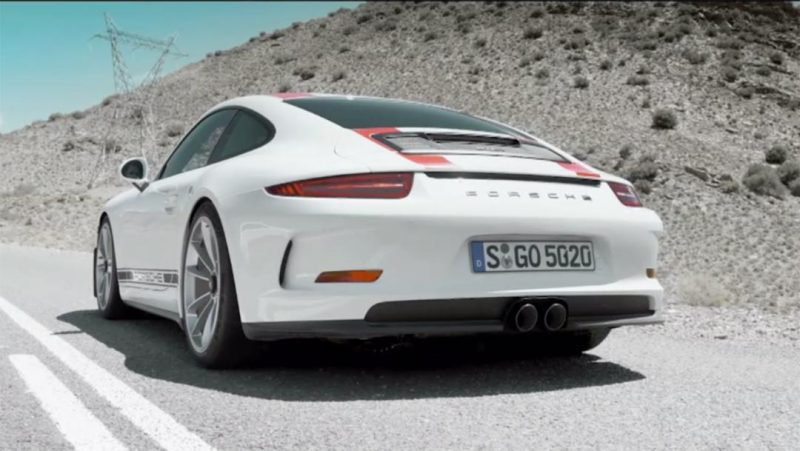 The 911R’s rear end uses the same pop-up spoiler as found in a standard Cabriolet for just a little more area over a coupe, to combine with the trick diffuser to keep things under control. At the front, a GT3 bumper is employed, but the front lip has actually been made smaller to balance out downforce between the two ends of the car. The 911R then adds back some stability by making use of a R-tuned rear-wheel steer system.

So what does all of this mean for high-speed stability? Well, it goes without saying that Porsche knows what they’re doing. Evo Magazine recently took a 911R out for a run on the Autobahn to see just how well it would work, and the video results speak for themselves. The car hovers in the upper range of the 200 KPH spectrum for most of the video, and they make a run well above 300 KPH around the 3-minute mark. Even at those exaggerated speeds, the 911R makes stable and fluid lane changes and prowls through some nice sweeping bends at speeds that would have a normal car spinning off the road.

Considering our project Boxster can barely touch 110 MPH without getting floaty, this video is pretty impressive to me. It would seem Porsche’s aero work has really played out well with the R. When is our turn?