There is no amount of preparation or strategy that could make up for the absolute downpour weather that hit the Floridian peninsula on Sunday morning and threw about forty wrenches into the works. Porsche ran a strong 24 hour race in the dry, but suffered mightily in the rain, as the track was a complete mess. Porsche managed to come out of it with a podium place, but both team cars were running 1-2 a few times throughout the race. It’s hard to call this a great finish, but the battle that raged in GTLM for the full race length was definitely one of the most exciting in recent memory. With competition from Ford, Corvette, BMW, and Ferrari, there was never an inch to put a foot wrong. Porsche had to be perfect the whole race, and they nearly managed it.

Visibility was practically zero on Sunday morning, as you can see from the video below of the WeatherTech Ferrari running headlong into the Black Swan Racing GTD Porsche. It was wise of the race stewards to throw a red flag in the early hours of Sunday morning, but it was absolutely unwise of them to throw the race back to green with little warning. The drivers said they didn’t even have time to warm up their brakes, just thrust into the fight on a whim. The rain wasn’t the worst part, though, it was the spray of standing water kicked up by other cars. It was just a mess for the final few hours, and probably should have been called earlier.

Visibility is so low in the #Rolex24.

Toni Vilander had no time to react when the 540 Porsche appeared in front of him. pic.twitter.com/pcOiHWaBsO

Saturday was an absolute proof of concept for Porsche. Flying away from the pole position, Nick Tandy was in a great position. The GTLM-class #911 Porsche 911 RSR ran up front for much of the first half of the race. Patrick Pilet and Fred Mako worked well with the car and the dry conditions. The Porsche clearly had speed in hand, running fast on the high banking, but not giving up anything on the infield either. When I went to sleep at the half-way point of the race, the team was still leading. In fact, they were still well up the order when I woke early the next morning, but a hydroplaning incident that saw the car slide into the back of one of the Ford GTs as they fought down to the millimeter for advantage at turn one was a turning point for the #911. The team recovered to fifth, but the race was red flagged shortly thereafter. 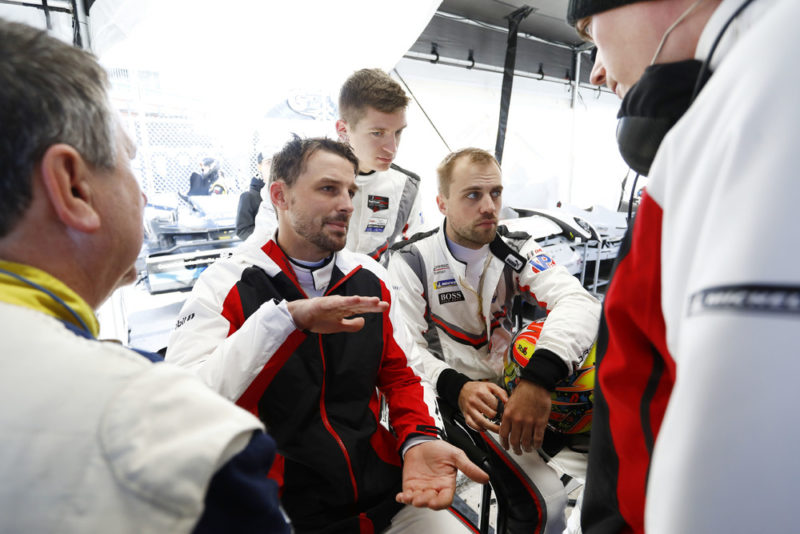 Porsche #912 had a vastly different race this weekend, as Earl Bamber, Laurens Vanthoor, and Mathieu Jaminet suffered horrible luck in the early runnings. With an issue in the car’s front splitter mount, the team wheeled back to the garage to affect repairs. When they returned to the course, the car was four laps down. Luckily, with IMSA’s wave-around rules, and stellard driving and strategy, the team was able to recover to the lead lap by the mid-point of the race. The car sat in fourth, still on the lead lap, when the final red flag segment was called. The #67 Ford GT had pitted for emergency fueling during a full course yellow, which is allowed, so long as the team pits again for a full fuel up when the pits open. Between the emergency fill and opening the pits, the red flag was thrown and Ford couldn’t come back in for the full service. They’d been in second place, but were handed a penalty for the unserved fuel stop, which relegated them to fourth, behind the #912 Porsche, handing them a podium place. Pascal Zurlinden (Director GT Factory Motorsport): “If you ignore the weather, then you have to admit that was a great race. We witnessed some top-class racing from all manufacturers. It was a great show for the fans. We were really strong in dry conditions, in the wet, however, things didn’t really go as we’d hoped. The result might look a little disappointing at first glance, but the potential shown and the perfect teamwork make me very optimistic.”

Steffen Höllwarth (Program Manager IMSA SportsCar Championship): “That was a gripping race, from which we’re very happy to take home a podium result. We led the field over long stretches, we coped impressively with a setback for our No. 912 car and we regained lost time. There were many highs and lows. We were very fast in the dry with a setup designed for high top speeds on the straights, but unfortunately not quite so in the wet. To achieve a podium result under such difficult conditions is a great effort. Now we’re looking ahead with optimism to the next race in Sebring. We are keen to repeat our victory there from last year.” Patrick Pilet (Porsche 911 RSR #911): “I’m very disappointed, because we were really strong in the practice sessions and the first half of the race. We couldn’t quite maintain the performance in the rain. A collision cost us two laps in the race, but that wasn’t the decisive factor. I’m focussing on the positive aspects. Our car was extremely fast on a dry track. Our team and the driver trio are strong. So I’m heading to the upcoming race in Sebring feeling optimistic.”

Nick Tandy (Porsche 911 RSR #911): “The first hours were great fun. Our car was fast and reliable, I enjoyed thrilling duels against drivers of other brands. But then torrential rain came. Having to drive at Daytona in such conditions is a very different experience. But we can’t complain. It could have been much worse.”

Frédéric Makowiecki (Porsche 911 RSR #911): “I think we can be very proud of our performance this weekend. In the practice and qualifying sessions we were at the front, and in dry conditions we led the race over long periods. Unfortunately that changed completely once the rain set in. We experienced serious aquaplaning and therefore couldn’t quite maintain the pace. At the end of the day I’m left with many positive impressions.” Earl Bamber (Porsche 911 RSR #912): “What a crazy race. We were extremely fast, we coped impressively with a bitter setback and we had a car to beat in dry conditions. The situation was different in the rain. We were no longer the fastest out there. All in all, we’ve started the season well with a podium result.”

Laurens Vanthoor (Porsche 911 RSR #912): “Everything was going fine until late at night. We’d set up our car for a high top speed and this worked perfectly in the dry, but we lacked downforce in the wet. I enjoy big challenges and I’m a fan of old-school racing, but these conditions were just crazy. When you’re driving at 290 km/h and you can only see two metres in front of you and you’re flying blind with 30 other cars on your tail all going the same speed, well, that just goes too far. I don’t ever want to experience something like this again.”

Mathieu Jaminet (Porsche 911 RSR #912): “Had it stayed dry, we would definitely have been able to fight for victory. Unfortunately we lacked a bit of speed in the wet. Third place was certainly the most we could do under these conditions. We can be proud of our performance and result. We’ve earned many points to start the season and are on the podium.” In the GTD class, Porsche’s luck was even worse. The new-for-2019 GT3 R was fast and had plenty of power, but a seriously competitive GTD field and poor luck relegated the best finishing example to 8th. The Park Place Motorsports car had taken a full pit stop under green flag running just before the final caution, and subsequent red flag flew. If they’d been another two laps or so to the good, they’d have finished much higher up the running order. That’s how the cookie crumbles, I guess.

Black Swan, as seen in the video above, got rear ended at high speed, putting them out of the race late in the running. Similarly, on the initial failed restart from red flag conditions, the rad-in-plaid Pfaff Motorsports GT3 R ran headlong into a very slow Lamborghini to end their race prematurely. The NGT Motorsports car suffered a spin early on, and within a few laps had a complete engine failure, dumping fluids all over the track.

Porsche remains optimistic headed into the 12 Hours of Sebring in March.