Since Porsche has been out of the LMP1 game, ending the program at the conclusion of the 2017 season, our favorite German sports car maker has been pushing their GTE programs to the top of the heap. After winning both GTE Pro and GTE Am classes at Le Mans last year, the team is looking to repeat that feat this weekend. They have a very strong group of teams and drivers, but the competition is extremely heavy. So here we stand, at the end of the 2018-19 “Superseason” with Porsche running a quartet of factory-backed GTE Pro cars, hoping to bring the heat.

Porsche’s GTE Pro team has either won or been on the podium at each of the seven FIA WEC rounds this season. Not only does that add up to three victories (including Le Mans) but it secured Porsche the GTE Manufacturers’ championship a few rounds ago. Here in the United States, however, things have been even better, as Porsche has won the last three rounds of the IMSA championship for GTLM cars, the 12 hours of Sebring, Long Beach, and Mid Ohio. Both pairs of cars, the Euro squad run by Manthey Racing and the USA squad run by CORE Autosport, are riding high on a season full of greatness, and hope to carry that momentum through the most important race of their collective seasons.

With all of that said, the GTE Pro grid at Le Mans is about as strong as anyone could ever face. In qualifying this week the top five positions were taken by five different manufacturers. Aston Martin is on Pole, followed by Ford, Corvette, Porsche (4th), and BMW, and they’re all within 1.1 seconds of the Aston’s pole time. There are two Corvettes, two Aston Martins, two BMWs, three Ferraris, and four Ford GTs in this field to battle four Porsches, and every single one of them has a package capable of winning the class. The Porsche’s new exhaust doesn’t sound quite as good as it did last year, but thankfully the GTE Am cars have to run last year’s specs, so they’ll still be roaring up and down the field. 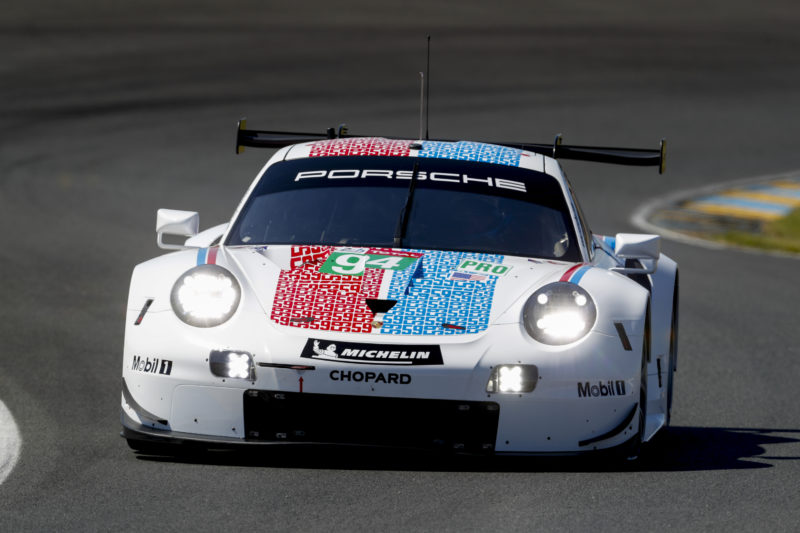 Michael Christensen, driver of the #92 911 RSR, commented after qualifying, “We’re actually better than the qualifying result indicates. On my flying lap I had to let two prototypes pass in the middle sector, and then I had to overtake a GT car. This cost me a lot of time. Of course we would have preferred to start from further up the grid, but our car is really well balanced, which means we’ll be able to make up a lot of ground in the race. I’m heading into the season finale feeling really good.” In GTE Am it’s a slightly different story, one of both ups and downs. Porsche nabbed pole in qualifying with the #88 car of Dempsey-Proton Racing. Not only that, but Porsche locked out 1st, 2nd, and 3rd starting positions on the grid, and are supported by two more P-cars starting 5th and 6th. Even better than that, Porsche has netted 6 of 7 WEC round victories this season, including Le Mans 2018. Even better than that, it was the #77 Dempsey-Proton car that has won five of those 6. Team Project 1 won in Fuji when Dempsey-Proton was disqualified for not meeting minimum fuel filling time during pit stops. In any case, Porsche looks very strong for Le Mans this year with an excellent balance of speed and fuel economy. Matteo Cairoli, who grabbed the pole, had this to say: “This is my second pole position in a row at Le Mans – I’m blown away! My fastest lap was good, but I still lost a little time in some places. At the end I was nervous because it looked as if some other Porsche 911 RSR might still pose a threat. But it was enough. We’re heading into the big race feeling terrific.”

So that’s all the good news sorted then. Now for the bad news. A sixth 911 RSR was planned to enter the 24 Hour race this weekend in GTE Am, a third Dempsey-Proton entry fielded for Krohn Racing. That car’s am driver, Tracy Krohn, crashed the car in practice and while he was given a clean bill of health by the trackside doctors, the FIA put him on a one-week race ban for potential brain injury due to the g-forces involved in the accident. With Patrick Long and Nic Jonsson ascribed to the car to join him, that car, the #99, has been withdrawn from the proceedings. This will mark the first time in 16 years that Patrick Long has not raced at Le Mans. Bummer.

Starting at 8AM eastern on Saturday, the cable channel MotorTrend TV (what used to be Discovery/Velocity), and the MotorTrend On Demand app streaming site will broadcast the full 24 hour race live in high definition. What a time to be alive!