It’s been fifty years since Porsche won its first Le Mans outright, with Richard Attwood and Hans Herrman taking the win in the iconic red and white team Salzburg 917. In the fifty years since, Porsche has risen to become the single manufacturer with more experience and more victories at this legendary race than any other. But experience doesn’t always beat bad luck.

Before the race even began, the two Porsche 911 RSRs were given a heavy balance of performance weight compared to the 2018 and 2019 Le Mans spec, which saw the car win and double-podium respectively. The 2020-spec 911 RSR was revised and improved, but it was saddled with an additional 45 pounds of ballast and a smaller air inlet restrictor to reduce horsepower. In qualifying trim the drivers in the #91 Porsche managed to set a decent time, putting Porsche on pole for the GTE Pro category, but as soon as the race started it was clear the Aston Martins and Ferraris had the legs on the Porsche team in race trim. 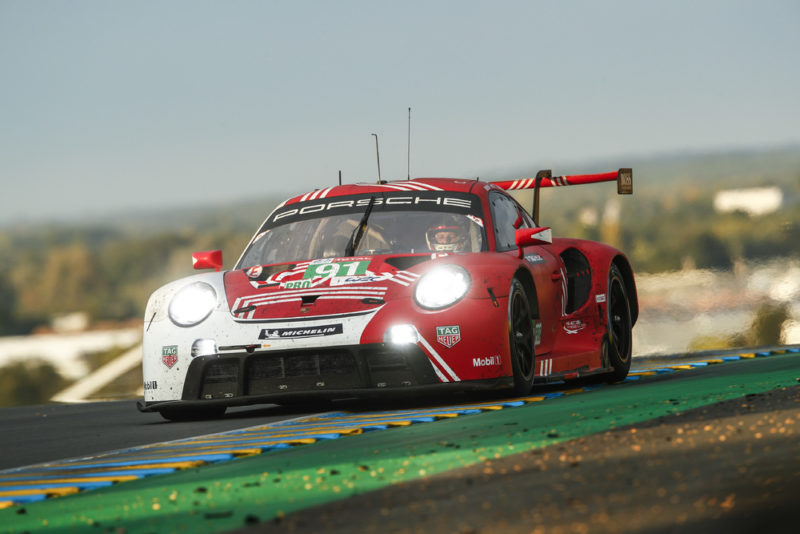 By the end of the second lap the #91 and #92 cars were at the back of the pack, and neither car ever really recovered a position. Running at the back of the class for the entirety of a 24 hour race can be demoralizing, but it’s even worse when things start to go wrong. Around hour five, the reigning world championship car of Michael Christensen, Kevin Estre, and Laurens Vanthoor was called into the pits with a power steering issue. That initial repair and another one shortly after cost the team fifteen laps. With the quality of competition at Le Mans in 2020, you just don’t recover from a fifteen lap deficit. The sister car of Gianmaria Bruni, Richard Lietz, and Fred Makociecki managed to stay at or near the pack through a hard-fought battle deep into the long night and was still in contact with the leaders as the sun rose on Sunday at Circuit de la Sarthe. Then trouble struck in the form of an electrical issue. The Salzburg livery would not help the 91’s luck, and it would fall a handful of laps down to the field in rapid succession as the team diagnosed and repaired the fault. The car returned to the race in second-to-last with only the #92 behind. Porsche finished fifth and sixth in the GTE Pro class, both cars several laps down to the class-winning Aston Martin Racing Vantage. It was fairly obvious that the Astons had sandbagged a bit in qualifying, as they both ran faster laps during the race than Porsche’s pole-winning time, while neither Porsche turned in a fast lap within two seconds of the class winners. The manufacturer from Stuttgart just didn’t have the car to win this year, and that was decided before the race even began. The only consolation is that both cars finished the race unscathed. The only two cars in the GTE Pro category which finished behind Porsche were the WeatherTech Racing Ferrari, which suffered a race-ending crash, and the AF Corse Ferrari which ground to a halt on the final lap of the race from fourth position and was not classified as a result. Porsche’s only bit of good luck in this race was that it had customer cars in the GTE Am category fighting at the front all race long. Aston Martin also won the GTE Am category with the TF Sport team, but it was Porsche’s Dempsey-Proton Racing #77 that crossed the line in second position. Factory ace Matt Campbell shared driving duties with Riccardo Perra and Christian Reid to bring the car home as highest placed Porsche, finishing even ahead of the factory GTE Pro Porsches. The race ultimately came down to a final 24-minute dash to the flag after a lengthy safety car. Matt Campbell was in the car and put on an absolute masterclass of slipstreaming to pass a couple of cars for the podium position.

Comments on the race
Pascal Zurlinden (Director Factory Motorsport): “Our first outing with the Porsche 911 RSR-19 at Le Mans was anything but easy. We’ve learned a lot. After achieving pole position, we’d expected more from the race – but we were disappointed. We’ll combine our experiences, draw our conclusions, and return stronger next year. Congratulations to our customer teams Dempsey-Proton Racing, Project 1 and Gulf Racing, who finished in the top five of the GTE-Am class.”

Alexander Stehlig (Head of Operations FIA WEC): “We continued to optimise our Porsche 911 RSR throughout the practices and were rewarded with pole position. That was great. Not so great, however, was the start of the race. We immediately realised that we couldn’t keep up in terms of acceleration and top speed. These factors are particularly painful because we also lost more and more time in traffic. On top of that, there were too many technical problems. We’ve got a bit of homework to do. We’ll improve the car and our processes and then we’ll be back to attack at the final round in Bahrain.” Gianmaria Bruni (Porsche 911 RSR #91): “After claiming pole position on Friday, I never expected the race to be this hard. We gave our very best and drove a clean race. The team worked perfectly, but unfortunately, we lacked performance and the technical problems prevented a better result. At the final race in Bahrain, we want to show that we’ve learned our lessons.”

Kévin Estre (Porsche 911 RSR #92): “It quickly became clear in the race that our performance compared to our rivals wouldn’t be enough to reach the podium. That was the first bitter pill to swallow. Then, a repair cost us twelve laps. That was the last straw for us drivers and the team members. Still, we pulled ourselves together and did our very best. This year’s experiences will help us to be much stronger in 2021.”

Matt Campbell (Porsche 911 RSR #77): “Second place is a dream result for us, because given the pace of the winners, we couldn’t do better. The drivers and our team did a great job. We can all be very proud. The final sprint after the last safety car phase was great fun. I just went all-out. We’ll celebrate second place as if it were a win.”