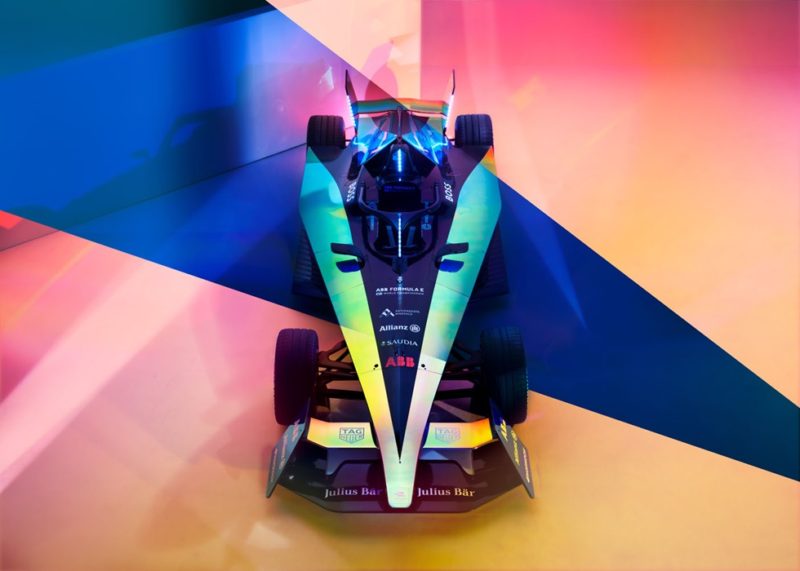 The first teaser images of the Gen 3 Formula E car have been released, and it’s definitely the weirdest open-wheel racer we’ve ever seen. This futuristic racer looks like a 1970s concept car drawn by Giorgetto Giugiaro after a long weekend spent rolling around in a closet with something from Roberto Pannuzi’s stash. The series runs a spec chassis with spec aero, so it doesn’t need to be the most aerodynamic shape anyway, so why not have fun with it? This is a really cool way to get open wheel racing to be a little bit more fun, because the cooler the cars look, the better it will be to watch on TV. Those large flat panels are great for advertising, and the livery designers can really go hog-wild with this thing. Hopefully it’ll mean a few more creative liveries than Porsche’s boring old black and white. Let’s see some historically significant Porsche liveries on this, or maybe some exciting new ones that will be remembered as icons of the sport in twenty years! Porsche joined the Formula E grid in 2019 and has already committed itself to running the Gen 3 car when it debuts for season 9 in South Africa later this fall. The new car is set to be the most powerful and most technologically advanced all-electric race car in the world. For Gen 3, Formula E cars will not only be some 120 pounds lighter than the current car, but they will be significantly more powerful as well. The car will finally be able to exceed 200 miles per hour from a 470 horsepower motor providing propulsion at the rear of the vehicle. There will also be a new 335 horsepower motor at the front of the car, but it will only be used for regenerative braking, and cannot be used to power the front wheels. These new advanced electric motors are said to be about 95% efficient, meaning more of the power will make it to the ground instead of being burned off as heat. That also means the cars can recoup more energy through regenerative braking than ever before. Apparently around 40% of all energy expended by the cars will be recovered through regenerative braking. In fact, the Gen 3 Formula E car doesn’t even have hydraulically actuated brakes at the rear of the car, slowing the rear wheels with regenerative braking only.

Jamie Reigle, Chief Executive Officer, Formula E said: “Monaco is the spiritual home of motorsport and there is nowhere more fitting to unveil our Gen3 race car. The Gen3 disrupts and challenges the conventions of motorsport, setting the benchmark for performance, efficiency and sustainability without compromise. Together with the FIA, we are proud to reveal the Gen3 to Formula E fans and demonstrate to the wider sports industry how elite sport, high performance and sustainability can successfully co-exist in the ABB FIA Formula E World Championship. We cannot wait to see how our teams and drivers push the car to its limit in 2023.”

#Gen3 is here. Our team got the chance to see the live reveal of the next-gen race car at the #MonacoEPrix.#TAGHeuerPorsche #PorscheFormulaE @FIAFormulaE pic.twitter.com/gVy8vw0uEn