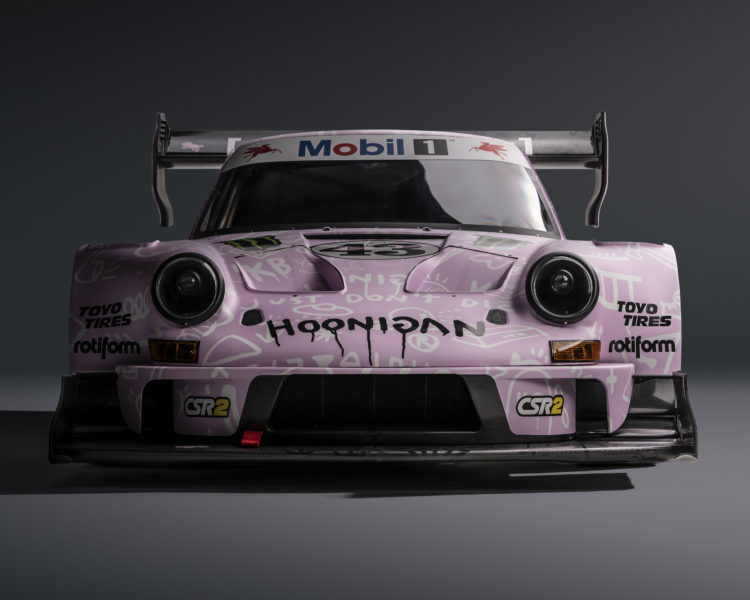 Pikes Peak International Hill Climb has long been the battlegrounds for run-what-you-brung motorsport, and this year is the 100th running of this magnificent race. In celebration of the centennial event, Ken Block, the folks at Hoonigan, and the mad scientists at BBi Autosport are jumping face first into the Pikes Peak pond, aiming for an overall victory in this historic event. And thankfully for all of us, that rowdy crew is doing it with Porsche power. This absolutely ludicrous 1400 horsepower 4-liter turbocharged flat six-powered all-wheel-drive prototype is shaped loosely like an old-school aircooled 911. The unfortunately-named Hoonipigasus draws inspiration from all over Porsche’s history, including the ludicrous Truffeljager von Zuffenhausen 917-20 “Pink Pig” from 1971.

With Mobil 1 backing, this conglomerate of So-Cal hoons is preparing an all-out assault on the mountain, throwing everything they can at the race. With a methanol-powered 4-liter twin-turbo engine, this incredible machine produces a claimed 1400 horsepower, which should be plenty to tackle this race, even though it’ll lose a significant portion of that power through elevation gain across the run up the mountain to the over-14,000-feet finish line. The biggest trick this car has up its sleeve is BBi’s GPS-height-adjustable suspension, meaning the car can react to bumps in the road before it even approaches them. “The Pikes Peak Hill Climb is one of the big reasons as to why I’m a rally driver,” said Block, co-founder ofHoonigan. “The list of drivers who have raced and won this hill climb includes many of my heroes: Walter Rohrl, Ari Vatanen, Michèle Mouton, Sébastien Loeb, and Rod Millen to name a few. I’ve always wanted the chance to race Pikes Peak at the top level and compete for an overall win – and with our team and BBi Autosport creating this amazing Porsche, we’ve got a good shot! And, with Trouble’s wild livery, inspired by one of the most famous Porsches in history, we’ll be hard to miss. I’m stoked to be a part of this iconic race and totally up for the challenge to add my name to those that have gone the fastest overall in the most technically challenging hill climb on the planet.”

“The Hoonipigasus is an absolute dream-come-true type of build,” said the founder of BBi Autosport, Betim Berisha. “It doesn’t get any more mental from a tech, power, aero, and visual standpoint. The original vision of
the car came from a longtime friend of mine, Joe Scarbo of Scarbo Performance, nearly a decade ago. We then teamed up with our most talented engineers and designers, threw the book out, and took an unconventional path. We are building the world’s nastiest 911.” Ken Block has run at Pikes Peak before, back in 2005 with a comparatively anemic Subaru. He has also spent serious time at the mountain in his equally-ridiculous Hoonicorn machine, practicing for and filming the video short Climbkhana back in 2018 (below). Perhaps even more significantly, BBi Autosport has been preparing wild machines for this race for the last three years, and decided it was done worrying about class wins and aimed straight for the overall with this bonkers machine.

Obviously, the scariest part of this whole plan is that Pikes Peak will absolutely consume you if you put a single foot wrong. When Ken is on his game, he’s a top-level American driver in top-level machinery, and he can seemingly get everything right. But when he gets it wrong, it seems to go really wrong, really quickly. We can all only hope that everything goes right on June 26, when Ken attempts to find the fastest elapsed time in history at Pikes Peak.