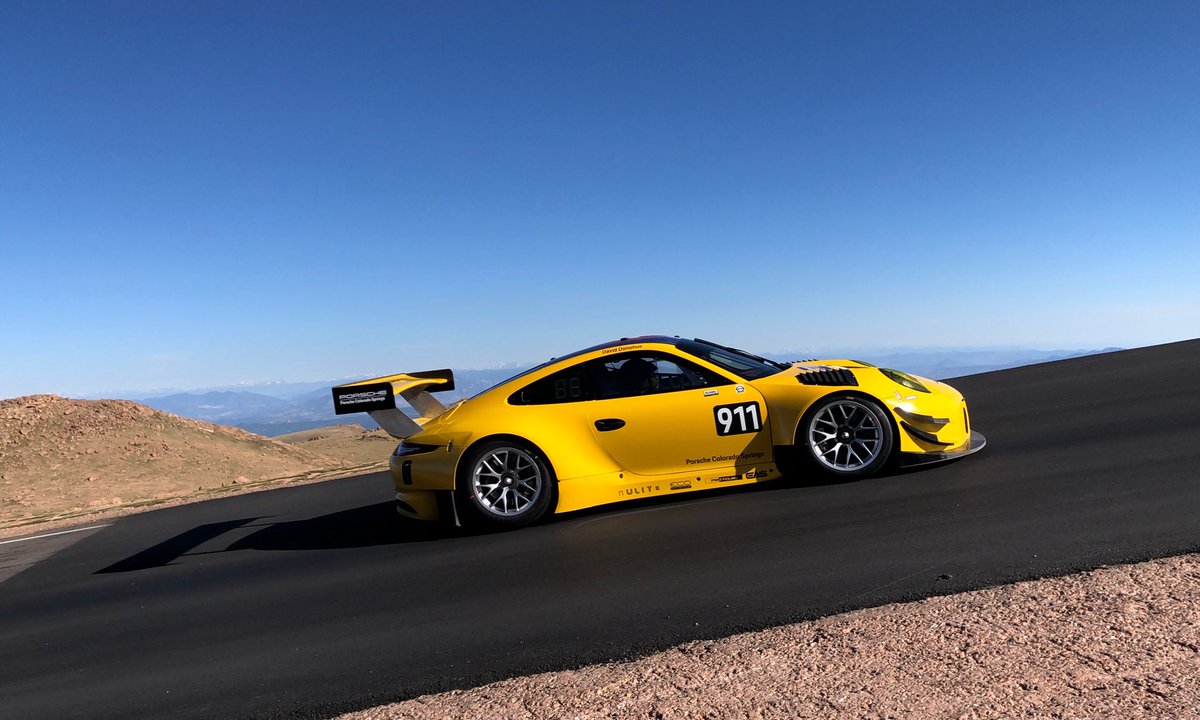 Porsche, and other manufacturers, are starting to take the Pikes Peak International Hill Climb quite seriously indeed. After years of running an amalgam of privateer efforts with Jeff Zwart at the wheel, Porsche hired the man himself to mastermind a whole class of motorsport superstars in Porsche Cayman GT4 Clubsports. David Donohue also entered PPIHC for the second time, now in a proper Porsche of Colorado Springs-prepared GT3 R race car. Add to that the fact that the Porsche 919 Hybrid development team helped Volkswagen produce their all-electric I.D. R overall winner and new record setting champion, and it was Porsche’s own Romain Dumas at the wheel (just a week after racing a 911 RSR at Le Mans), and you’ve got serious Porsche involvement in several of the hill climb’s classes.

Last year David Donohue ran to second in the Time Attack 1 class with his 911 Turbo street-car-turned-race-car. With more advanced aero and more serious racing tires, Donohue ran a new class record, a class win, and fifth overall behind the open and unlimited classes with a 9:37.152 timed run. You can see an interview with David, as well as his full run up the hill onboard the bright yellow GT3 R.

Got the win today in the @yokohamatire #gt4cspikespeak class a @pikespeakhillclimb .. It started snowing shortly after I finished but was able to make a solid run to the top. What an epic event! Huge thanks to Joe, Justin and all the crew at @porschecolorado for the hard work and giving me such a great #porsche to take on the mountain. @nitrocircus #teamyokohama #winnerwinnerchickendinner #smagicalstrong #isitreallyjune @porschecustomerracingna @alpinestars

The other big winner for Porsche was extreme sports and rally racing legend Travis Pastrana. Aside from breaking bones with his insane stunts, Travis has been breaking records behind the wheel for quite a while. Pastrana owns the record for fastest driver to ever go up Mt. Washington in Gorham, New Hampshire. While he hadn’t raced at Pikes Peak since his Rally America days back in 2005, Pastrana was an instant success at the task. His car was also prepared by Porsche of Colorado Springs, and it could not have performed any better than winning the inaugural running of the class. The cars are prepared to a specification, making for a level playing field. Pastrana ran an impressive 10:33.897 to come home nearly 5.5 seconds clear of teammate and open wheel racer JR Hildebrand. Other notables class competitors included sports car racer Mike Skeen, and Porsche brand ambassador CJ Wilson. You can see an interview with Pastrana, as well as his full run up the hill onboard the #199 Cayman.

On top of the world! At least it feels like that. @RomainDumas and the @Volkswagen I.D. R #PikesPeak make history at the #RaceToTheClouds. Defo we’ve been #ChargedToThePeak pic.twitter.com/rW0HQVzBr3

The record at Pikes Peak has stood since 2014 when Sebastien Loeb took it in his gasoline-powered Peugeot. This weekend, however, legendary Porsche racer Romain Dumas has swiped it out of the hands of his fellow Frenchman racing to the top to be the first person ever to break the 8-minute barrier. This is Dumas’ fourth PPIHC overall victory, having previously won in his privately entered small-bore gasoline-powered Norma. Considering he has a lot of experience behind the wheel of Porsche’s LMP1, as well as plenty of experience at Pikes Peak, he may have been the perfect person to race the Porsche-influenced electric speed machine up the hill. Volkswagen started with a clean sheet of paper just 9 months ago, and in that time built an incredible machine. Porsche’s prototype engineers helped the process along, and without their experience in LMP1, the car may not have been quite so successful.