So, you’ve decided it’s time to take the plunge and watch car racing on television. You flip on the SPEED channel and there is some kind of road racing going on. Many cars turn right and left and up and down; there are blind entries and exits, off camber turns and sometimes all of the above on the same corner. You recognize a BMW, perhaps a Corvette and then a screaming Porsche 911. Now you’re getting into it!

You may not know the players in the drama (the teams and drivers) but now you know who you like in that particular race – a red and silver liveried (the car’s color scheme) Porsche. It is not unusual for viewers to choose the car they favor by first glance. In fact, football teams are often chosen by color schemes and in tennis players are hardly chosen purely on ability. So grab a bag of chips and a beer (or lemonade) and watch that red and silver car in all its glory. As you turn up the volume to hear the sonorous sound of a flat-six strangling the life out of titanium, and other expensive metals, as it climbs into the RPM stratospher, the announcer’s voice comes on, interrupting your beautiful moment with the Porsche. He says something like “Look at that–he’s was way off the apex in that corner; that is going to open up the door for the cars behind him.” “What?” you think, “what the heck did that just mean?” Never fear, your friendly neighborhood race terminology coach is here!

In the new PorschePurist Motorsport 101 series we’re going to cover all you’ll need to know about basic motorsports terms and conditions. As we begin this series, we’ll place the racing terms in bold and hyperlink them to definitions as this series evolves. If you find a term that is not yet linked it simply means we’ll be explaining it in further detail down the road. In future posts we’ll share some in-car video with you to help illustrate these terms and heighten your motorsports experience.

In this first edition let’s look at the following terms:

Over the coming weeks and months we’ll introduce more and more terms and concepts that will contribute greatly in your enjoyment of most televised road racing.

Unlike most other forms of competition, in road racing there are races within the race, particularly in endurance racing like Grand Am, ALMS, European Le Mans Series and FIA GT, where multiple car classes race on track together. This can be confusing to viewers. Last year, as I watched the Detroit Grand Prix, I was asked by a very successful and intelligent person, “why did the yellow car pass the other car so easily? Is there something wrong with the other car?”

So, why do they mix the classes in certain racing events? Simple, having different classes racing together offers a distinct challenge for drivers in both classes (and a lot more excitement for spectators).

Put yourself in Porsche factory driver Joerg Bergmeister’s shoes: you are piloting a 997 GT3 RSR (€530,000 version of your 911), part of the GT2 class in the American LeMans Series. You turn onto the Mulsanne straight at the Sarthe and whip through the gears into 6th gear, glancing in your rear view mirror as you cruise at 175 mph, halfway to the chicane. Suddenly a P@ (Prototype 2) Porsche RS Spyder overtakes you like you’re in a diesel wagon coming home from Whole Foods with your dog in the back.

The lesson here? drivers must pay close attention to all cars on track whether they are heated rivals in class or cars out of class battling for their own glory. Some drivers (like Patrick Long) feel that they have an advantage when they drive in the GT2 class before getting into the Prototype 1 class. He knows how the GT driver thinks and where he is going to want to set up the car for the corner, where he will apex, and how the car will track out. Handling traffic not only translates into better and more consistent lap times, but can also mean the difference between a racing highlight and a major race incident.

The apex is perhaps the most famous term in race terminology, and it matters whether you’re a beginner or a pro. When I instruct in our Porsche (PCA) driver’s education events, I am always asked, “where do you apex this corner?”

Let’s try to visualize what the apex is. As I know from the skid pad, the larger the radius the faster you can go, right? (If you have never driven on a skid pad try this in an open parking lot…let me please stress ***OPEN***:

The blue line in the illustration below marks the perfect line to follow in order to apex the turn properly: Like life in general, something is always around the corner. The apex a race car driver chooses is based on what comes next; the corner exit needed for what comes after that. This brings us to the line.

What is the line?

The racing line consists of: 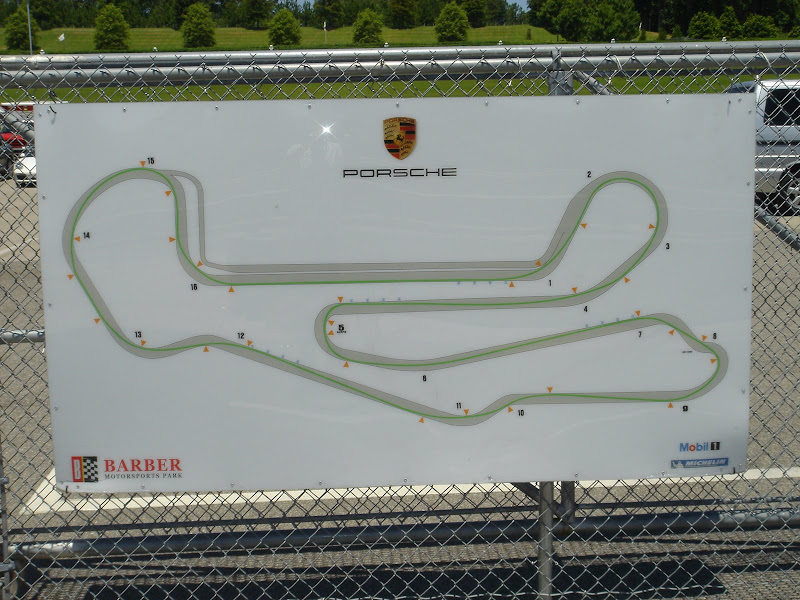 This is the place where the driver applies the brakes to set-up the car to enter a corner. There are various levels of braking depending on preceding acceleration, corner angle and what follows after you exit the corner.

This is the place when the driver first begins turning the steering wheel to enter a turn. Again, levels of turn in vary by the type of corner the car is about to enter. You already know the apex from above, so let’s move on.

This is the trajectory the race car follows as it exits a turn. The track-out varies depending on the line chosen by the driver. (A note here: the track-out is not optional. Failing to allow a car to track out can pinch the turn, which can destabilize the car, resulting in all sorts of complications!). At high speeds, the track out is crucial to maintaining speed.

The line has both a theoretical and real-life race condition version.

The ideal line is the best possible way around the race track. Although there are various lines that work at each race track, a racing driver will do his or her best to replicate his theoretical, optimal chosen line each and every lap.

Taking the proper line can make a big difference. If the driver misses the line’s apex consistently, by as little as 1”, the mistake can easily put him a quarter of a mile behind a competitor who is not making that error. While in qualifying a driver has a very good chance to put together the most perfect lap possible with light fuel loads, new sticky tires and lack of traffic, things are always different during the actual race. Dirt, oil and weather changes all affect the ideal line – and a good driver is always ready to make minor or major corrections.

In the coming weeks, I will continue to illustrate some of the most common terms associated with motorsport. Stay tuned, and feel free to send me your comments and questions so we can address them here!

Christian M. Maloof drives in the Grand-Am KONI Challenge (ST series). In addition, Christian is Track Chairman and Chief Instructor for Porsche Club of America’s Rally Sport Region. He holds instructor certificates and race licenses from the MidOhio School and Skip Barber. He races a Porsche 993 3.8 RS in the German Touring Car Series (GTS) division with NASA. He may be reached at cmaloof at porschepurist dot com, christian at christianmaloof dot com or by visiting christianmaloof.com.