We’re well into the second half of 2018 now, and Porsche’s month-to-month growth shows no sign of slowing. Indeed, save for Cayenne sales in North America, all models are up in 2018. The sales figures tell just part of the story, as Porsche’s increasing investments in new fields are beginning to have larger and larger effects on the company as a whole. As Porsche’s investment in electromobility begins to ramp up, other similarly ambitious brands are feeling the pinch. While sales are up about 3%, the total Porsche workforce is up 5%, due in part to the electric initiatives and new facilities. Between the new Panamera, new 718 models, and 70 years of Porsche sports cars, there is much to be excited about from the first half of 2018. In the first half of 2018 Porsche saw a return on sales of 17.5%, down slightly from 2017’s peak of 18.1% (for the sake of comparison, Volkswagen’s return on sales in late 2017 was about 7%). Per CFO Lutz Meschke, this result is keeping the brand on target, despite mounting challenges from the global political and economic climate, as well as tightening emissions standards. “Nevertheless, we will continue to pursue our strategic objective of achieving an operating return on sales of at least 15 per cent”, said the CFO. The total operating result and revenue are up 1% and 4% respectively. Sales globally are up 3%, with larger regional increases in the Americas, Europe, and Germany in particular. Sales have fallen in China, the Middle East, Africa, and the Asian-Pacific region, though these losses are offset by gains elsewhere.  The overall trends seen now reflect those from the first quarter of the year. 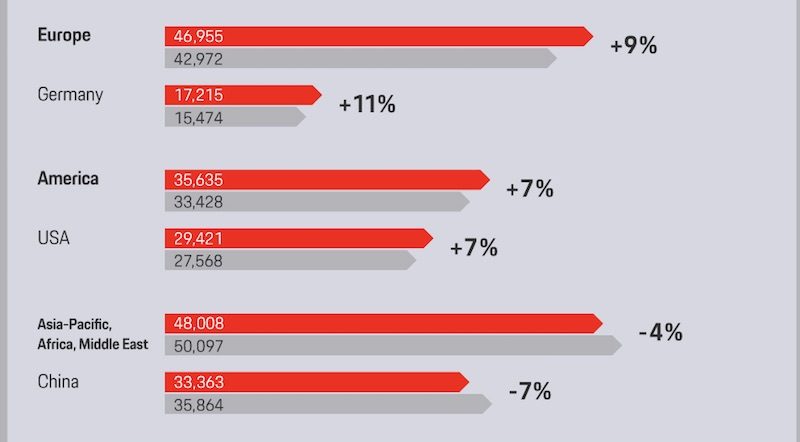 Per Oliver Blume, Chairman of the Executive Board of Porsche AG. “It is particularly pleasing to note that the iconic 911 is in such demand, given that this year we are celebrating ‘70 years of the Porsche sports car’. We are also continuing to invest in the future of our brand: Electrification, digitalisation and connectivity are major challenges that we are choosing to view as an opportunity. Next year will see the market launch of the Taycan, the first purely electric Porsche. It will set standards for the future of mobility.”

The Macan continues to be the best selling Porsche model and is also the least expensive, undercutting the base Boxster by about $12k in the US. The Cayenne and Macan together are Porsche’s best-selling lines. Compared to the first half of 2017 the Panamera saw the most explosive growth in the Porsche lineup, with a 91% increase in sales, totaling some 20,500 units. The 911 also saw double-digit growth in 2018, for an increase of 28% over the first half of 2017.