Porsche is currently testing a new Cayenne variant based on the Coupe body which will allegedly “redefine the meaning of the term SUV”. When discussing this new Cayenne, Porsche mentions the 2006 Cayenne Turbo S and the 2007 and up GTS sporty models, which I assume means the company is developing this as something of a combination between the two. It’ll have the big power of a Turbo S, but with the chassis control and handling dynamics of the GTS. This new Cayenne, Porsche says, “is based on the current Cayenne Turbo Coupé, but has been designed and developed even more single-mindedly to provide the ultimate in terms of longitudinal and lateral dynamics.” Clearly Porsche needs to compete with ultra powerful and sporty SUVs like the 641 horsepower Lamborghini Urus and the sports-focused Aston Martin DBX.

With nearly two decades of experience building fast SUVs, Porsche should be in the catbird seat to haul in and overtake the competition in this segment. The Cayenne Coupe is a great starting point for this machine. There is already the $110,500 Cayenne GTS Coupe with 453 horsepower, and the $131,900 Cayenne Turbo Coupe with 541 horsepower. Of course the current top of the Cayenne charts is the Turbo S E-Hybrid Coupe, which makes 670 horses, but it’s weighed down with all the extra batteries and will cost you a hefty $166,200. The going chatter from Auto Express is that this turbocharged mega Cayenne will make in the realm of 630 horsepower and it will do that without the addition of hybrid electric motors. Auto Express also claim a 3.4-second 0-62 time and a top speed of 186 miles per hour. It’s not quite as powerful as the hybrid, but because it’s focused on lightweight, it’s both quicker and faster. Look out Urus!

This new model still weighs in at a hefty 2.2 tons, but it’s been equipped with typically huge PCCB yellow brakes for quick and repeatable stops. The suspension has also been uprated for handling dynamics, lowering the car an additional 7 mm below even the GTS model, and has been fitted with all the Porsche stuff to make it move through the corners about twice as quick as its weight should allow it to. Dynamic chassis control, torque vectoring, and rear-axle steering give the car an extra level of agility. Add in a set of sticky Pirelli P Zero Corsa tires on 22-inch wheels and you’ve got a recipe for a stupidly fast pepper.

It seems silly to focus on saving weight in a four-thousand pound car, but Porsche shed 48 and a half pounds from the Cayenne coupe by fitting it with a carbon fiber roof. Another 39.7 pounds were found by fitting the car with a lightweight titanium exhaust system. Count another fifty pounds of weight reduction in the carbon ceramic brake rotors alone, and you’re starting to see real appreciable weight loss.

Recent birthday boy Walter Röhrl drove the new Cayenne at Hockenheim and called it “great leap forward compared to everything that has gone before. This car redefines the meaning of the term SUV”. So he liked it then? “The car remains incredibly stable even in fast corners, and its turn-in behavior is extremely precise. More than ever, you have the feeling that you are sitting in a compact sports car rather than in a large SUV,” continued Röhrl. Yeah, sounds like he liked it. 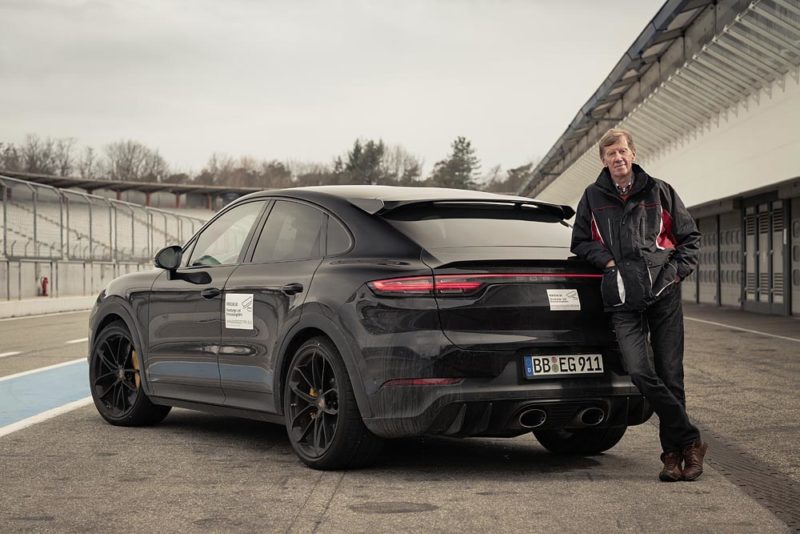 Here’s Porsche test driver Lars Kern to explain a bit more about the Super Cayenne: “The PDCC always keeps the body balanced and level even during very spirited cornering,” explains Porsche test driver Lars Kern. “Compared with the Cayenne Turbo Coupé, the front rims are now half an inch wider, and negative camber has been increased by 0.45 degrees in order to provide a larger contact area for the 22-inch sports tires newly developed especially for this model,” says Kern.

Auto Express seemed to think Porsche might call this the Porsche Cayenne GT5. I’m not sure how involved the GT division in Flacht was with this Cayenne, but if they helped develop it, I could see the GT5 designation hit the Cayenne. It’s a shame that we seem to be getting a GT Cayenne before a GT Panamera or Taycan, though.