Over the years we’ve shown you many different Porsches built from LEGO. Everything from full size 911 RSR and 919 Hybrid race cars to a LEGO built 911 with working suspension. You’ve probably seen this viral video of a LEGO Technic 911 GT3 RS being crashed or perhaps looked in awe at the work done by master Porsche LEGO builder Malte Dorowski. However, outside of one short story, what we’ve never done is shown you how to build your own LEGO Porsche. Thanks to a new book, How to Build Brick Cars, now we can.

END_OF_DOCUMENT_TOKEN_TO_BE_REPLACED Authored by Ford Motor Company vehicle designer Peter Blackert, How to Build Brick Cars provides detailed, full-color illustrations and step-by-step instructions on how to build a range of contemporary and classic vehicles, including an early Porsche 911. 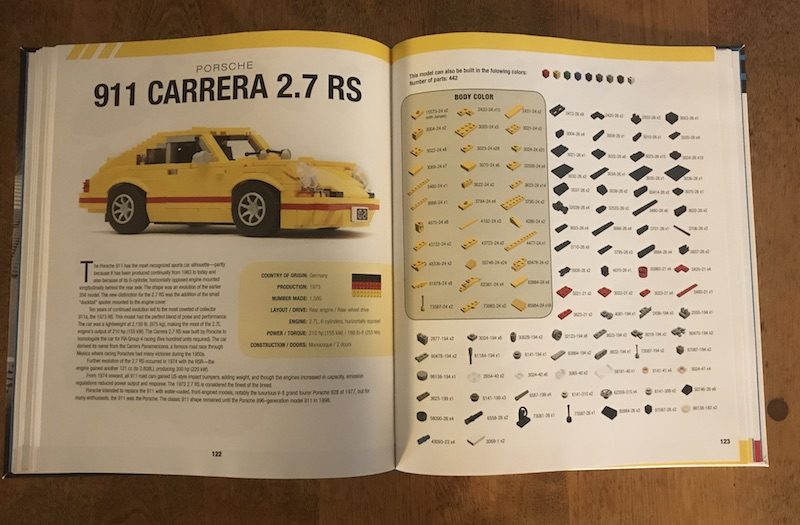 While the book provides instructions and part numbers, it didn’t provide info on where to find those parts or how much they might cost. We reached out to Blackert, via his publisher, to ask a few questions. Here’s what we found out:

PB: There aren’t any particularly rare or expensive parts in the Porsche 911 2.7 RS model. In the US sourcing parts through online parts sales service Bricklink would probably cost about $50 – $60.

PB: The instructions cover this model specifically, but I ordered them in a way, particularly with regard to the assemblies, where it would be pretty easy to build different forms of the early 911. The instructions leave the front and rear bumpers until last, so you basically have a competed early 911 bodyshell, and could make it into anything from a very early 901, through to a 930 Turbo, and even a 964. The colored bricks on the top edge of the parts list page show what colors the model can be built in too, if you want to make a specific car.

PB: The Porsche 911 is possibly the most iconic sportscar shape, partly due to longevity and, unlike some other well known sportscars, the 911 is relatively common – so everyone has seen one. The Carrera 2.7 RS, is of course, a very special 911. I was asked by the publishers which model I would chose if I had to pick one only, the the RS is absolutely the ONE. For obscure reasons I no longer remember, by online avatar name is lego911 – so it is also, kind of my calling card car, too.

FS: Do you have a particular thing for Porsches?

PB: Not so much anymore, but when I was a teenager, absolutely. Actually, I have a soft spot for the 928, its still looks like it was designed yesterday, and its nearly 40 years old. And when I was 15 years old, I recreated a sketch image of the 911 Turbo from a 1986 Porsche brochure I had picked up while in Germany. Now I am an engineer too – so I appreciate that Porsches have a strong engineering focus, and were created to be used to their potential and keep functioning. And, I loved the frothy air-cooled 911 engine sound. Yeah. I probably still have a thing for Porsches.

FS: Have you designed any other Porsche Lego models? What Else Can You Build?

Besides learning to build a 911 Carrera 2.7 RS LEGO Porsche, How to Build Brick Cars provides detailed instructions and parts lists for the following vehicles:

All-in-all, at just $22.40, this book seems like a great bargain for someone wanting to get started in the world of building LEGO Porsches, or any other marque for that matter. Besides the step-by-step instructions and detailed parts lists, How to Build Brick Cars provides a foundation you can take with you as your skills increase. The only negative comment I can think of for this book is that the author didn’t provide resources for where to purchase parts or how much they might cost. However, with a little research it’s pretty easy to find out. If you want to get yourself a copy of How to Build Brick Cars, it’s available from Amazon.com.

*The publisher of this book sent us a free copy for us to review. If you buy this book, using a link on this page, we get money to help keep our Porsches on the road.