It’s amazing how much detail LEGO can cram into a small space. Their Mini Cooper kit, and indeed most of their large-scale models, are 16 studs wide. The Speed Champions series are 6-studs wide. Some dreams require just a bit more room. At a full 32 studs across and 68 studs long Sariel’s R/C 917K dwarfs most of LEGO’s in-house creations. Add to that a detailed body with custom chromed blocks, working steering, power, and app-integrated remote control, and suddenly you have a monster of a build.

For those of us who spend our spare time fooling with LEGO, Bricklink is a familiar name. As a hub for finding rare parts, it’s more or less unrivaled. For a build like Sariel’s this can mean finding hundreds of dollars in parts in peculiar colors to make something as simple as a Gulf livery work properly. Common though the requisite blue and orange may be on custom cars, they are not common colors in LEGO Technic. 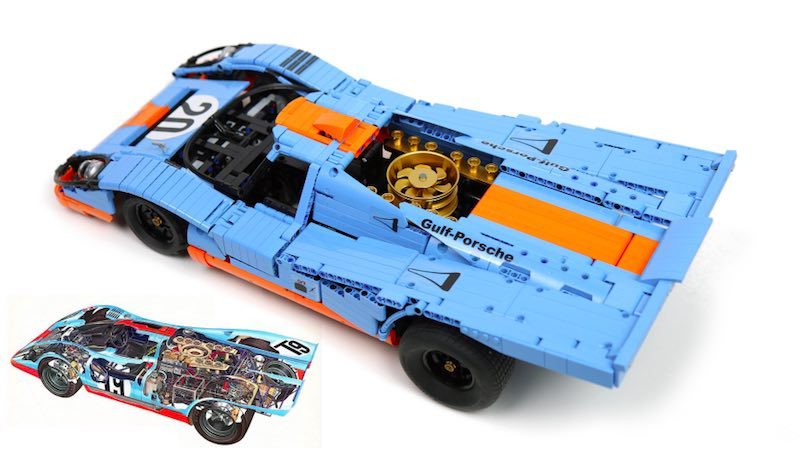 The largeness of the model’s scale allowed Sariel to recreate many of the 917’s details accurately, including the wishbone front suspension and engine cradle assemblies. Add in working lights, accurately scaled wheels and tires, and a tasteful application of custom chromed plastic, and suddenly you have a very compelling model.

But accuracy isn’t the end of it, because this 917 moves. Using a pair of synchronized LEGO motors with BuWizz controllers, Sariel created a 917 that moves along briskly. Not modern racing R/C car quickly, but swiftly enough for a car with LEGO Technic levels of structural integrity.

Additional details on the build can be found on Sariel’s website, as can features on his other custom builds, such as an 8×8 Tatra and an R/C Mk.V tank.